When we were kids, my sisters and I each had a collection, which lived on the shelves that our dad had constructed on the walls of our bedrooms. We treasured the little porcelain figurines of our selected animal. Mine were dogs, Jane had frogs, Julie had ... turtles, I think. Ellie... did you have one? Horseys? Ann? Mar? Shit, here I go again with the hazy childhood memories. Sigh.

Anyway, as I was saying, we girls had collections, and they were sweet and unassuming and tidy.

This weekend, I did some cleaning in my boy's room, and although his shelves were constructed by the same man in the same style as those of my girlhood, his collection is ... different.

The middle shelf holds a mish-mosh of oddities: 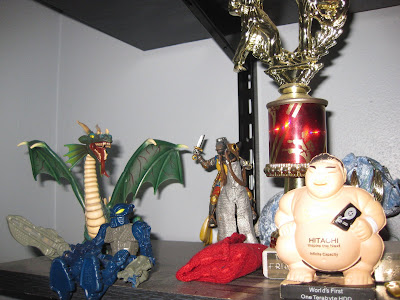 But the bottom shelf boasts his collection: 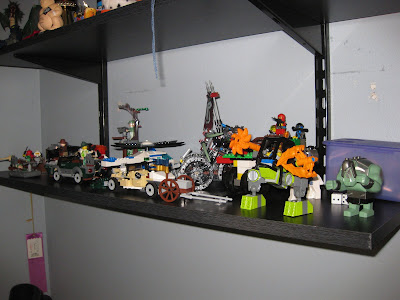 It's creative, it's original, it's boisterous and fluid. It is entirely not girly.

Look at this guy - some class of skelator indy jones, inexplicably hauling a medieval vehicle: 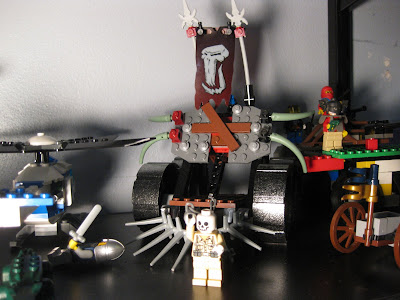 Here we appear to have a traveling band of ninja executioners: 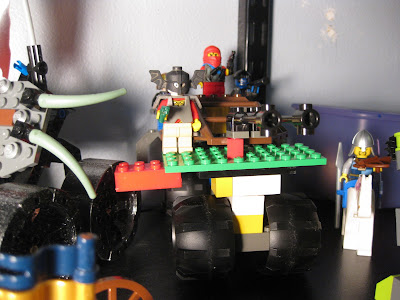 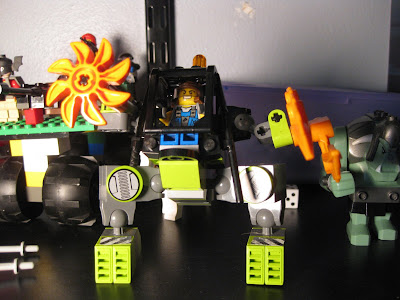 An epic battle between soviet land and water forces: 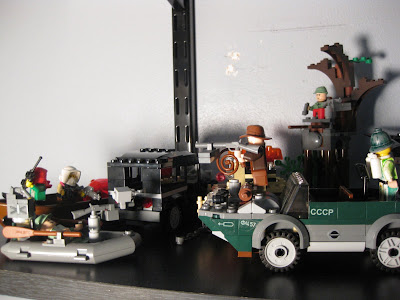 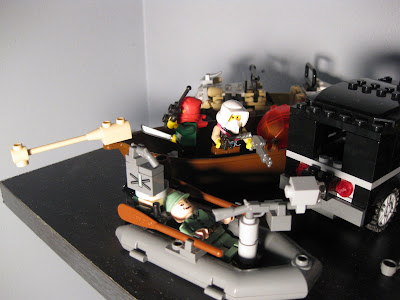 It's disturbing, yes. but not just because of the weaponry or the fear that this is the work of a clearly deranged preadolescent mind. It's just so different from the collections of my youth. It's not simple. It's not tidy. It's not sweet.
.
Sometimes I am overwhelmed by the mere fact of my boy's boyness, and I worry that the piece of me that lives in him is going to get smaller and smaller as he gets bigger and bigger.
.
But then I notice something in the corner that I had not seen before. A scene that clearly represents my influence, and proves that my boy is still my boy:
. 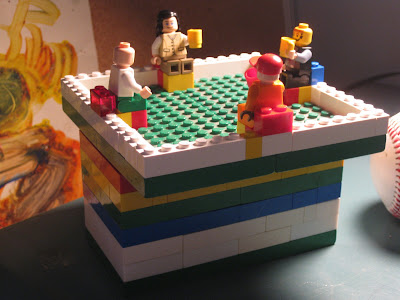 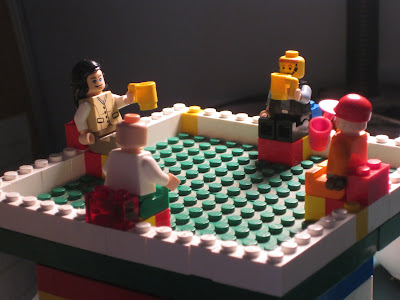 I love(d) Legos, but they do tend to be either weapon heavy or super girly. When I was a kid, they were less pre-built parts, but they are way cooler now. All that last shot needs is a serving wench...

And I love your boy's Sumo Wrestler!

Jacquie! I had cats! Loads of them. Hordes of them. Litters of them. Which now, I'm proud to say, sit collecting dust on our niece Erin's shelves.

Your boy's stuff is wack. Totally demented. Boys are so weird. But I love the CCCP tank. So retro.

Someone's collection is in a shoe box in the guest room. I'll have to check it out when I get home. mom

I'll check it out with you later today, Mom!

I was actually with Jane, as I too had a frog collection, which I had completely forgotten about until Jacquie's post.

I SOO remember Beth's frog collection and I'm sure I added a few to it as b-day gifts over the years...you'll have to ask Pat where that childhood treasure is.
I collected "stuff" and now that I'm older, I've added DUST collecting to my "stuff" collecting.
It doesn't photograph well.
My heart was warmed at the sight of your subtle influence on your pre-teen boys life 'cause it sure gets harder to find as they muck through the teen years...

I had a cat collection, too, Ellie - maybe you gave me the idea at one of the reunions? I loved looking at it displayed in my white plastic hutch/desk from Sears that matched my white-plastic dresser and the canopy bed with the pink bedspread that matched the white and pink-flowered wallpaper. The green rug lent a grassy feel to the entire room...

When I would leave my pink, catty, ballerina-jewelry box enclave to play Atari or Legos or touch football or spying games or potion-making, I always knew I could be both strong and pink, skin-kneed and feminine, demure and wild.

I want my boys to feel free to express both, too - I figure a bunch of patience, honesty, womanhood-modeling (not the bikini kind, thanks very much), apologizing and good old fashioned availability oughta do it!

Thanks for the laughs, Jacquie (and the preview to teenhood - mine turns 12 in Sept)!

Hsin - we also have vats and vats of basic lego parts, they get a lot of use but rarely make it to the shelf. With the exception of that pool/deck number in the last photo.

Ellie, ah yes - you're the cat lady. Some things never change. Turns out MB was the horsies, still no word from Ann

Mom - fingers crossed that it's doggies!

love hearing about your collections too, PA and Beth and Karen Ketchup!

I had horses and wizards. My son, well, it's all dirt bikes and four-wheelers all the time.

I'm impressed that your son builds the Legos and puts them on a shelf. My boy builds them only to smash them I think ;(

just received this e-mail from my mom, with the subject line TA DA!:

Doggies rule!! An old Fred Perry tennis shoes box stacked full of the weirdest collection of doggies you ever did see. One of them has a pin cushion on his back and it's full of pins. ouch. I'm saving them for you Jacq.... love mom

This is the precise reason I love you guys so much. So funny! I love that little boy who makes pub crawl out of legos...

does anyone remember my sister Megan's MICE? (glass, china, wood). I think she tried to whittle the wooden ones. the MICE are still on shelves in her room and NO ONE (children, nieces, nephews) are allowed to play with them.