My first clue to the drama came in the form of a flurry of indignant tweets from people on the east coast on Sunday afternoon, most of whom were likening Kanye West to a certain feminine hygiene product, with or without the bag. So I set my DVR to record the MTV music awards. I didn’t mention it at all that night, I was reserving the right to delete the thing unwatched if I deemed it inappropriate for my kids. I kept an eye on Twitter, and was intrigued. Beyonce’s bootie (fantastic), Lady GaGa’s fashion (criminally insane), and of course, Kanyegate.

My son, (and his sister by default) is a big fan. In fact, the answer to this: 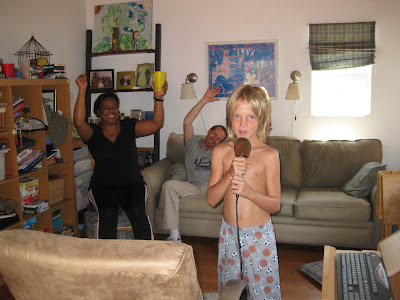 Oh Kanye, how could you be so heartless?

The next morning over breakfast, I gave the kids a quick summary of what had transpired: (this will also serve to enlighten any of you who have no clue what I'm talking about, not that I'd mention any co-bloggers names):

So, last night at the MTV video music awards, they were doing the award for best female video. The nominees were Pink, Kelly Clarkson, Lady GaGa, Beyonce, and Taylor Swift. And Taylor Swift won! She was so excited, she’s only 19 and it’s a pretty big deal. She ran up to the stage and was starting to talk about how surprised she was to have won, being a country singer and all… then all of a sudden, Kanye West jumped onto the stage, grabbed the microphone right out of her hand, and told everyone that Beyonce’s video was better! And he handed the microphone back to Taylor Swift, and you guys should have seen how embarrassed and sad she looked. And after that, whenever anyone said Kanye’s name, the whole crowd booed! And then later, when they announced that Beyonce had won the biggest award of the night, video of the year, she invited Taylor Swift to come back onto the stage so she could say her thank you speech.

My kids were shocked and appalled. My boy especially. I assured them that we would watch the footage later that night, and we talked about it a lot in the car on the way to school. I shared my opinion about people who believe that they are better than others, who feel that they are entitled to behave any way they please because of what they have achieved or just who they are. I explained that it’s not just about being rich or being famous, because a lot of people who are rich and famous are decidedly not assholes, and some people who have neither fame nor fortune most definitely are.

I want my kids to value their character. I want them to internalize a code of conduct that would prevent them from acting on the impulses that we all have to behave badly. Who among us has not felt the urge to yell at an offical who's made a bad call, or to blurt out "you lie" during our boss' speech? But we don't. It's rude. I want my kids to believe that being a good sport is more important than winning, that showing respect is more important than saving face, and that contentment means more than just getting what they want.

That night, Jay Leno was given an unique gift with which to launch his new primetime show: he had booked Kanye West to perform. I had heard that he now planned to sit and chat with Jay, and I tuned in to see what Kanye would say. Again, I recorded the program and reserved the right to delete it without mention. Again, I showed it to my kids the next morning.

I decided to show them because what I saw was important: humility. Despite that ridiculous haircut and inarticulate manner, Kanye West was humbled, and it showed. Was it an act? Who knows. He admitted that he had been rude. He said he was sorry. He said that that he needed to take some time off to reflect about how to live his life better. He seemed to be fighting back tears when he was asked what his mom would have said about his behavior.

We watched together. Then we all danced to “Run This Town” and laughed at the fact that Rhianna seemed to have forgotten her pants. Then we headed off to school.

On the way, we agreed that we should wait and see before deciding whether or not we’d buy any more of Kanye's itunes. Much as I’d love an excuse to curtail the hip hop fixation, there’s a bigger lesson here that I want my kids to know: when you screw up, the best you can do is admit you were wrong, apologize, and don't let it happen again. That’s two out of three, Kanye. Don’t let my kids down again.

We wondered about what Kanye's mom might have said, and when I told the kids that she had died recently, my girl said: "Poor Kanye West." Poor, indeed.

I think they get it.

Amen to that!
We don't get Mtv but my kids and I were up to speed that night with the help of Facebook chatter that lead to YouTube watching that lead to Mtv online...you get the picture.
This all comes after my 12 and 8 yr old girls went to their first ever concert with me last month and it was TAYLOR SWIFT. Add to that, she came into the crowd for 2 songs and stopped to HUG my 12 yr old!! I think I was more overwhelmed than she was. (I explained to them that Taylor set the bar way too high and that they will go to many a concerts and NEVER have that happen again...did Shaun Cassidy, Jerry Garcia, Eric Clapton, Mick Jagger ever come give me a hug?! )
Anyway..we love Taylor and she certainly handled it all with grace. And it was good to see Kanye humbled and see Beyonce continue to set the standard for class.
So many lessons in such a short span of time...and with such a varied cast of characters :)

Cobloggers indeed. I, of course, had no idea all this drama had transpired. I'm glad to know that MTV is teaching some lessons, even if indirectly and by accident.

(oh, central PA, do you remember Video killed the radio star? to be young again...)

You're a good mamma, J. You (and your DVR) managed to teach your kids good stuff using subject matter that really means something to them personally, therefore will stick with them. Talk about a teachable moment!

Well, he certainly has racked up a lot of publicity over this and will continue in the limelight over this for a while, she says cynically.

I think Kanye is hugely talented, but this is not his first bit of boorish behavior, although it's the worst.

I am probably being overly cynical, but I am thinking his apology has more to do with his underestimating the negative reaction than genuine remorse. I hope I'm wrong.

I love how you are using these moments that are pretty sad and petty to teach your kids so much...including forgiveness.

Oh, poor Kanye West. Poor poor, poor poor. Unfortunately, I suffer through the news on TV every day at the Tavern, so I *do* know what you're talking about, Jacquie. I have never heard a K.W. song, though, because I'm a hip-hop moron. Happily so.

What a week it's been for rude behavior! I'm glad you're there to set them all straight, Jacqueline. Actually, I wish you were at the MTV Awards and the US Open and the Joint Session of Congress to set all them straight. Maybe you can get a Cabinet post: Secretary of Polite Behavior. Your motto can be, "All's you have to do is not be an a-hole...."

thinking of you in central PA said...

oh Beth...so many childhood memories took place at your house, including my first exposure to MTV, spin the bottle, etc...but can we edit some of them now that we have kids?? :)

great post J! Think I will chat with my girls about it tomorrow...

What a great lesson to teach your kids. And somehow I think they will learn it much better than Kanye.