Doesn’t it just figure that this year, the year I was actually glad my daughter won a goldfish at her school’s Fiesta de Primavera, the fish has absolutely no staying power? No fortitude, endurance, or mettle?

He looks fine on Wednesday night, the night of the annual art show, before we bring him home and lovingly set up his new digs (taking extra care to add the Tetra Aquasafe for Goldfish drops). 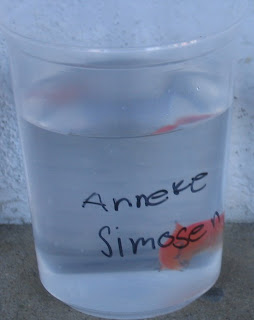 But look at him on Saturday morning, a mere 60 hours later. 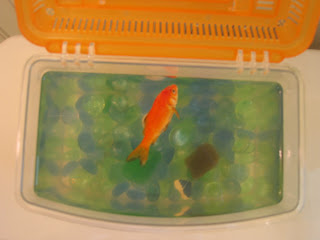 Surprisingly, my youngest daughter could not wait to share the tragic news with her still sleeping older sister, and when her sister did arise both girls immediately asked to flush the dearly departed fish straight down the toilet. They didn’t even request a ceremony, which they insisted on last year when last year's art-show fish died, and which they made clear they sorely missed when I accidentally washed last year's companion fish down the drain a few months later.

Ironically, I was hoping they did require pomp and circumstance because my camera battery was completely dead, and well, I needed a photo of the fish pre-flush for this blog entry. But the girls liked the idea of documenting the fish’s final journey on film, so they happily amused themselves until the camera had enough juice to function. 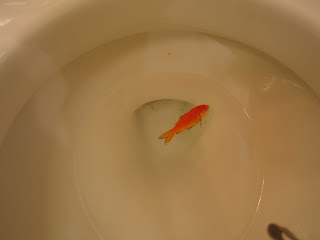 When the time finally did arrive they were efficient in their task --after a quick check to make sure the image was digitally captured, they flushed him right down. No big commotion, no big deal.

I’m not sure why they took it all in stride, but I have a sneaking suspicion that it might have something to do with what showed up at my office that Friday afternoon.

Can you see her in there? 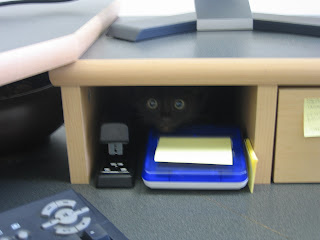 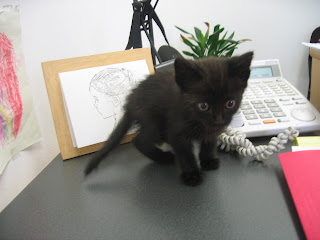 Yes, we’re all smitten with the kitten. But I AM left wondering how it is that in one short week two short days I could come into a goldfish at an art show and a kitten at a publishing company.

What’s the universe trying to tell me?

I haven't figured it out yet, but in the meantime please don't tell County of San Diego Department of Animal Services officer #258 what's going on at my house.
at 9:59 PM

That kitten is too great. Does she have a name yet?

First, take her to the vet. She's too skinny. Gotta know what you're bringing home besides a cute kitty.

Second, Fish? I don't even like to EAT fish, but to clean out a fish bowl? Have you ever gotten a whiff of the bottom of a fish bowl?

My sister Julie used to use the water from the bottom of the turtle tank on her plants, and man oh man, did they love that putridity. They were never the same once those turtles dwied up.

I can't lie. I'm not sad about Stripey's passing, even if it means my house plants will suffer.

And I do need to take that kitty, still nameless, to the vet. (And Marley too; I think the deadline for the damn dog license is this Saturday!)

Oh dear. I would NOT be surprised if ol' S.D. Officer #258 has got THAT date marked on her calendar...