The bathing suits we kids wore for the swim team each summer were always Speedos. They were made very well, damn them. Well enough to be passed down from sister to sister to sister infinity, much to the chagrin of the youngest and smallest who, as previously mentioned, had to adjust the back straps with footwear accessories.

The Speedo has... well... evolved over the years. I have bought a few here and there for myself and for my kids. But never for my husband. Speedo represents a style of men’s bathing suit that leaves nothing to the imagination. I generally prefer to imagine, thank you very much. But there are exceptions to that rule.

Last night, I watched Michael Phelps bust the world record for the 400 meter IM. I turned it on just as the starting gun rang out beeped (? Whatever). The kids and I cheered madly as Phelps worked his magic. What beauty in motion! After the race, I looked forward to the requisite poolside interview. I relish the chance to ogle this specimen. Who doesn’t? There is no body finer than that of a male swimmer. Yum. For a million dollars, I could not tell you the color of Michael Phelps' eyes. Can you? I can, however, describe his lower abdominals in detail vivid enough for a police sketch artist. And the bathing suit pants, ye gads! I could not tear my eyes away from the looooooow waistband, which seemed perilously close to failing in its mission to contain Mikey’s junk. One would think that by covering more skin, the bathing suit pants would leave less to the imagination. Oh, but would one ever be wrong! 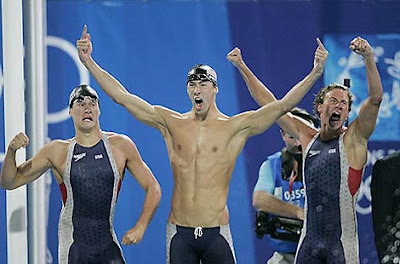 After the women swam in their unitards, the network showed a little feature on how the swimmers get themselves into those Fastskin suits. This is not for the feint of heart! It’s like spanx on steroids. Imagine how good I’d look in all of my clothes if I wore one of those as an undergarment? And no straps to tie together with a shoelace! 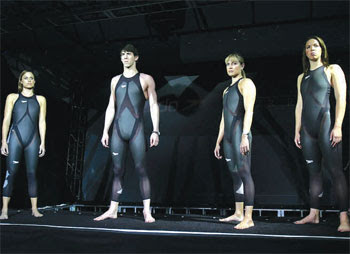 Awesome, Jacq! I love it. And I love that you and your kids watched the Olympic trials. Nancy and her kids were psyched to watch them, and Mumsie and Kelly watched too!

So... are you going to buy your husband-friend one of those things?

Hundreds of sweaty yoga classes later, I must say that I have absolutely no problem with men in Speedos, or alternatively, those tiny hot yoga shorts.

Those graphic lines on the speedos are for, I guess, the visually handicapped? Kinda like braille for the blind?