I recently received an invitation to my worst nightmare: 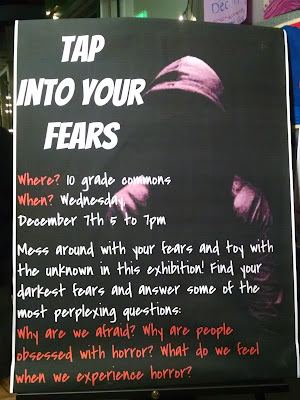 I had naively thought it was a really cool course of study in 10th grade humanities. My girl had spent the semester researching, conceptualizing, writing and editing a horror story. I was impressed with the films and readings they were doing as a class, including Jaws (those two notes!), the Raven, Hitchcock, etc. it was good old fashioned scary shit. I used to be a fan of scary movies when I was her age, did I ever tell you about that time I was watching Friday the 13th or Halloween or something with a friend in the den and we didn't know that Dad was in the doorway watching too, and at the end part where the monster/bad guy popped up out of the river or the grave or whatever, my dad screamed from behind us and we died of the fright? Anyway. I don't like scary movies anymore. They're scary!

So although I was impressed and enthusiastic about this 10th grade course of study, I began to experience increasing trepidation as snippets emerged about the exhibition that was being planned for this end of project celebration. I strongly suggested that she invite her dad to this special event because I was pretty sure I was going to be very, very, busy with important things.

And yet, there I was. Standing before that poster up above, and being handed a piece of chalk with which to write my deepest fears. Puke!

Then I visited 4 stations, each with its own procedures and disclaimers. The first one was a maze in a dark room. Here is the disclaimer:

I had a personal escort through this first experience, whose delight in my fear increased my suspicion and anxiety right back up to level orange.

I survived the maze, then went to the next stop:


I wish I could tell you what I experienced in that room, but I'm a struct follower of rules.

Next was the invitation to try a virtual reality experience, which really was quite scary up until the incoming text flashed before my eyes: "hi it's dad, I'm in the maze." So I paused to deliver the message to the student who was in charge of scaring me.

Finally, the last stop - the scariest one of all:

Well it looks like the exhibit was a LOT of fun, if not necessarily my kind-of fun. I hate me some scary shit! No thank you!!

I feel pretty much the same way about 10th grade. Nope, thanks anyway.

Kind of genius how they paired the two up together. :)

I would just say to them, "I'm sorry. I'm actively pregnant. And claustrophobic. And am about to have a panic attack for the ages. Sorry. Bye bye!"

How intriguing! And scary. And how you have left us in the dark (heh heh) here! I want to know what was unpacked! And what's in the boxes! And what the mysterious factors were!

Congrats on your bravery!
xoxox
Ellie