The Best Seat in Provincetown, Redux

Remember when I was famous?

Yeah, that was cool.

And because that place has a magical vibe, and because we finagled ourselves an additional day in P-Town, and because we were having such a wonderful time, when a random guy said to us, "Give me your phone -- I need to take your photo from outside the bar; I promise I won't steal it," we responded, "How do we look?" 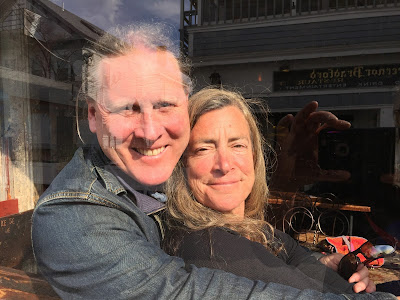 You can see the reflection of guy's hand holding my phone . . . 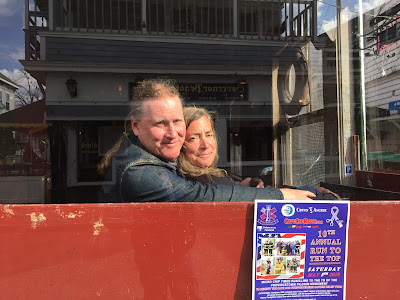 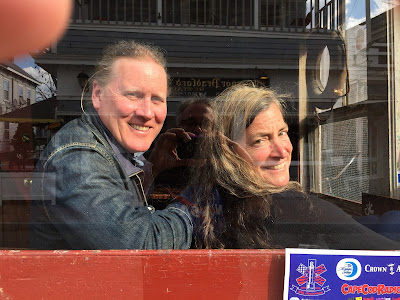 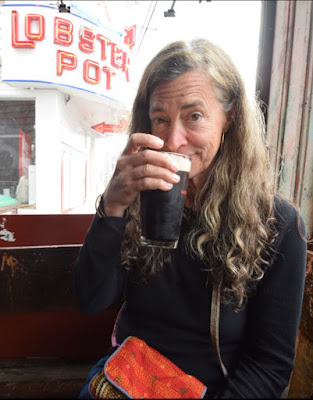 He is my favorite guy. Here's to you, guy.

Provincetown is a special magical perfect place and I don't want to tell you about it because I don't want you to go there so we can have it all to ourselves but okay fine. Here are some phone photos. You're going to have to wait until next week for Mistah's refined camera ones . . . 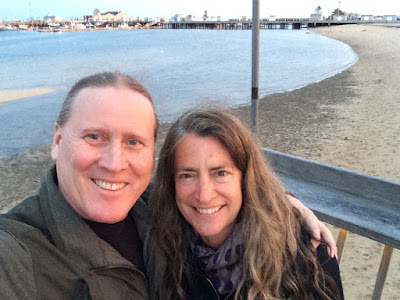 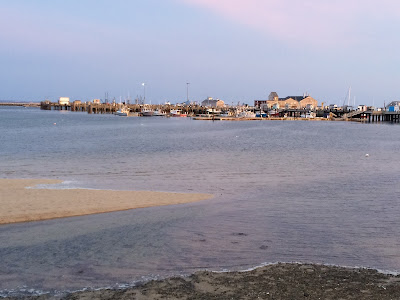 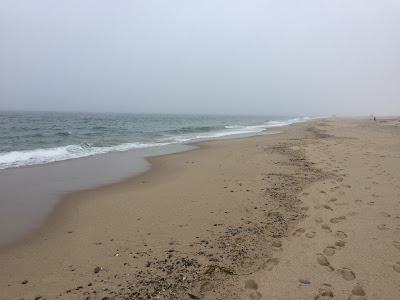 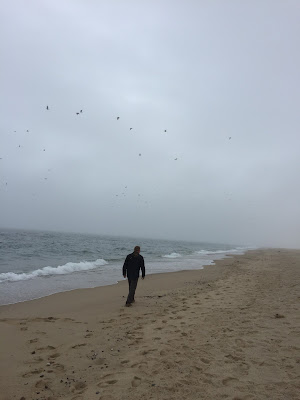 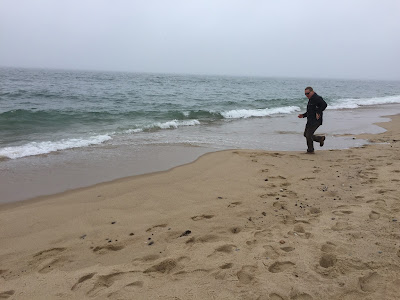 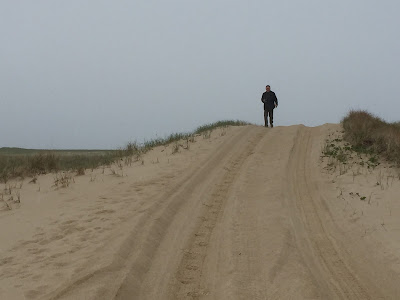 Won't you be my Neighbor?

Does everyone know about the NextDoor app, or is it a California thing? I hadn’t heard of it before moving to my current home, but now it’s a daily reminder about the very important issues that are causing feelings in the humans to whom I live in proximity.

It’s an app whose membership is limited to a specific geographical area.  You have to prove your residence in order to join. Therefore, I am not privy to the feelings of the fine folks who live in the next town over, nor are they in the know about the hot topics in my neighborhood. I used to wonder if my NextDoor was an anomaly, if other neighbors used the platform to barter and josh, to create friendships, or to find love and lost pets. Mine is a little, how shall I put this delicately… bananas.
There *are* quite a few lost and found pet stories and there *is* some bartering of goods and services, and I’ve looked at the recommendations section many times when I’m in need of a local service. However, I live in the flight pattern of an international airport.  It’s loud, but you really do get used to it and I barely even notice the resounding jet engines taking off directly over my head at regular intervals between exactly 6:30am and exactly 11:30 pm. It’s a small price to pay for my lovely home in this dog friendly town drenched in sunshine. The NextDoor people are less forgiving. If a plane dares violate the curfew by a split second, the site erupts with complaints and pleas for all readers to report the offense. I think this is the most frequently discussed topic on the site,  but dog poop, bad drivers, and anti-homeless rants are also quite faithfully represented.

So I used to wonder if other NextDoor groups were happy friendly fun-loving communities, but then I started comparing screen shots of some of the more colorful exchanges and comments with 2 friends who live in different areas, and was introduced to the pure gold that is #bestofnextdoor. My friend Janet shared one of my recent screenshots there: 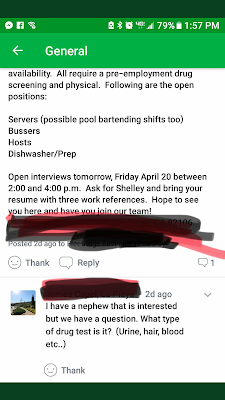 That’s a good NextDoor anecdote. But I have an even better story

On a recent workday afternoon, I was in contact with my daughter who had been in a 24 hour tizzy after losing track of her debit card. This particular tizzy had initiated the night before after a perfunctory look through her car, because she knew she had had the card in hand after meeting up with her friends that afternoon. She had grabbed her wallet, containing the debit card and a $10 bill, before returning a borrowed purse to her friend. Then she got into her car and drove home. So it had to be in the car, right? She’d taken a quick look in the car, but it was dark and she was tired and blah blah blah, she’d look again in the morning. No luck in the morning, but of course she was rushing to school so couldn’t give the task the attention she deserved. By the time she called me at work with an update, she was resigned to the fact that it was gone. I agreed to cancel her card, and mentioned to my coworker that I might need to step inside because I couldn’t do so on my phone.  That coworker was leaving for the day and wished me luck.

2 minutes later, that coworker stepped back out to ask: “Was your daughter in my neighborhood this weekend?”  She had taken a look at her phone on the way out of work, you see. And she had an alert from her NextDoor community. An alert from one of her neighbors with my daughter’s full name in the subject line, asking if anyone knew who she was, because they had found her debit card on the sidewalk and wanted to get it back to her.

In our continuing struggle to readify our lives for the warmth of the oncoming season -- man, it takes a lot to readify -- I finally found a window of opportunity to readify the deck.

It took a seriously long time to find the window.

I bought the weatherproofing stuff six weeks ago. 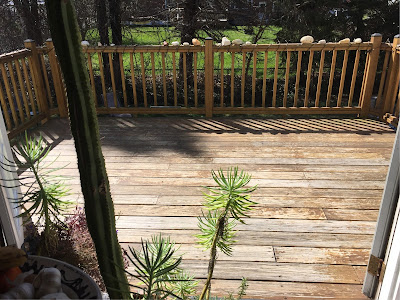 I hated to use a weekend to tackle a job like this, but the forecast for Saturday was high and dry and warm and windy and sunny so -- boom. Window open. Opportunity available.

Plus, I already had the stuff.

From six weeks ago.

Mistah helped me clear off the deck and I sanded and wiped and prepped and readied . . . 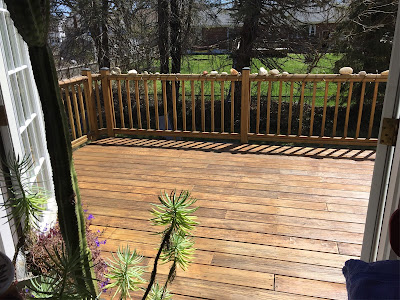 Yeah, no, me neither. I didn't think so either.

The wood is like dry skin. It needs moisturizer. Lots and and lots of moisturizer. I checked in with my friend the Mistah to confirm he'd be okay with *Sunday* having the deck be off-limits, too . . . 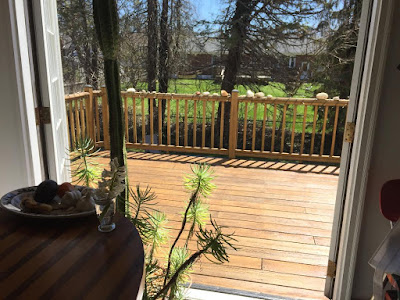 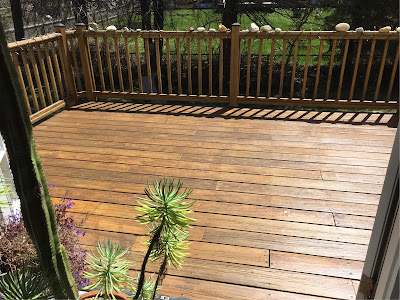 Now we are Ready. 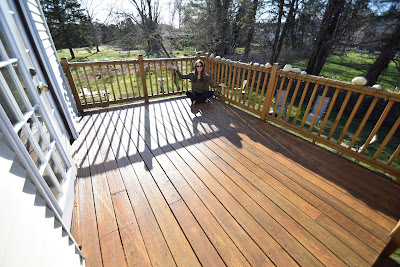 Who's ready for the season?

I found 29 recent food and drink photos on my phone

Is that a lot?

It's a lot more than the number of photos representing any other category, I'll tell you that much.

And in the interest of full disclosure, there were more photos than that but I didn't post the ones I already shared on facebook or wherever.

The first photo is dated March 14, the day I left for Albuquerque

Then there are a few of the food from the conference I attended, because I'd been certain that there would be at least one chicken parm represented, but they got all southwest up in ABQ

And then I came home, and celebrated an obligatory sushi feast with  my kiddos, with obligatory before and after montage:


Now we'll get a bit more random. If you can dream that possible.

I believe I already showed my Easter Feast table, but have you seen my plate?
And then, the parade of leftovers