Last week Mistah said to me, "What are our plans this weekend?"

As if anybody has any idea, ever.

But I looked at the calendar and said, "It's not Labor Day, it's still August, the weather is forecast to be outrageously awesome . . . and we have no plans."

So what do you do when an opportunity like that presents itself?

And what do you take photos of? 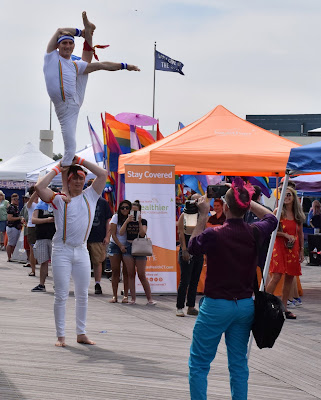 They were awesome and cool and weird and they totally scared Rachel and Michelle and there was no reason to be scared, people. They were awesome! And okay okay, maybe just a tiny bit scary. 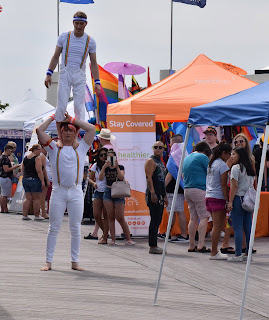 It was Pride Day at Ocean Beach Park and we are Proud of being Proud. 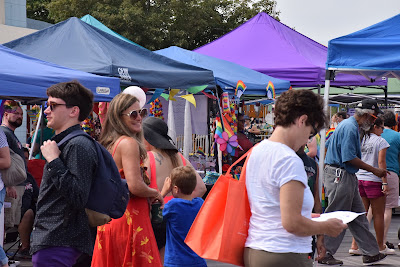 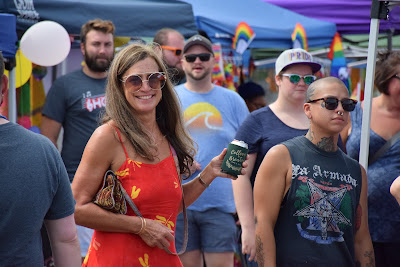 Definitely me. And Kendra. 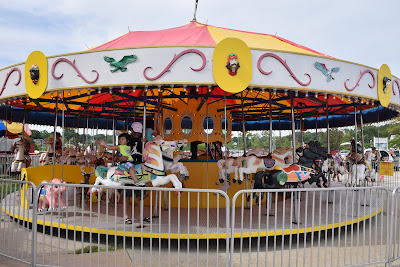 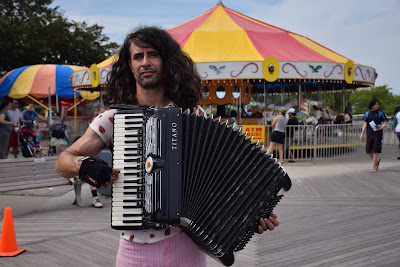 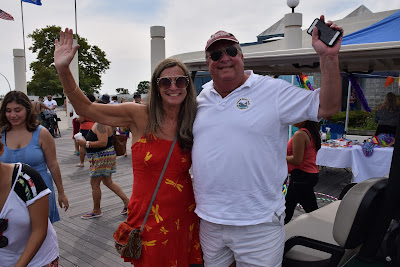 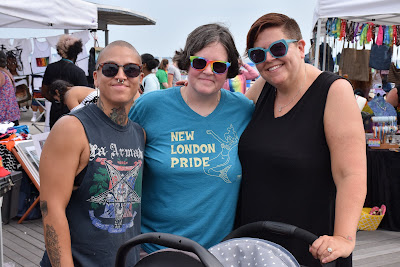 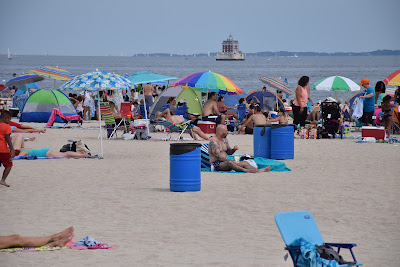 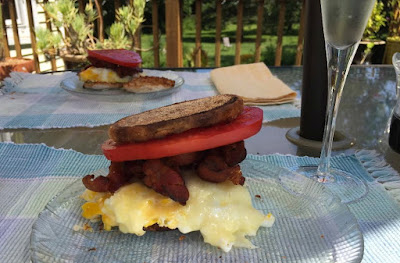 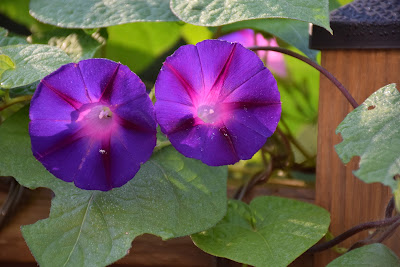 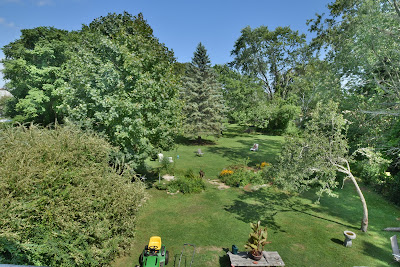 And I think it's pretty clear we live in heaven.

All the people have spoken so eloquently about Aretha, and I can never match that. Those writers, man. Those writers who say the things that you feel.

Two of my favorite are the New York Times "appreciation" by Wesley Morris:

"Is it possible that despite the milestones and piles of Grammys (the now-defunct female R&B vocal performance category seemed invented just for her; she won the first eight), despite famously having been crowned the greatest singer of all time in a vast Rolling Stone survey, despite being Aretha Franklin, the Greatest was also rather underrated — as a piano player, as an arranger (who had a greater imagination when it came to coloring a song with backing singers), as an album artist? Despite the world’s bereavement over her death, despite her having been less a household name and more a spiritual resident of our actual home, despite giving us soundtracks for loneliness, for lovemaking, for joy, for church, cookouts and bars, despite the induction ceremonies, medals and honorary degrees, despite her having been the only Aretha most of us have ever heard of, is it possible that we’ve taken her for granted, that in failing to make her president, a saint or her own country, we still might not have paid her enough respect? Just a little bit."
Her own country? I love that.

"It belonged to her the minute it was written, the minute that she sang it for the first time, the minute she recorded it. Carole King knew that and many years ago was thrilled to hear Aretha's version - which is why she was free to graciously celebrate, appreciate and honor Aretha who came to honor her, (and her President!) A holy night in Washington. Long Live the Queen."

But the very best evidence of all Is The Queen of Soul herself. There will be none like her. Ever. And so we thank her. That voice. That presence. That Aretha:

The Brits and The Bees

We've had a new species buzzing around these parts over the last week or so . . . 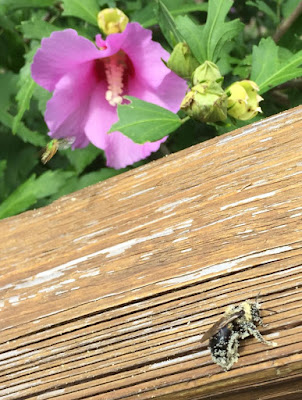 . . . no, not these guys. Although these guys have been getting inordinately intoxicated on all the pollen we offer them . . . for free. Look at him, covered head to, er, tail? with all that delicious pollen . . . 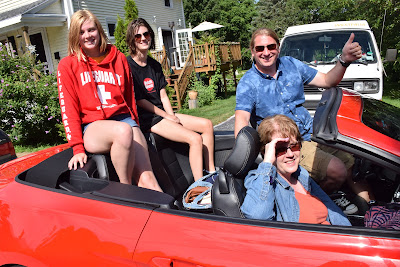 The Brits were in town. In their bitchin' rig. 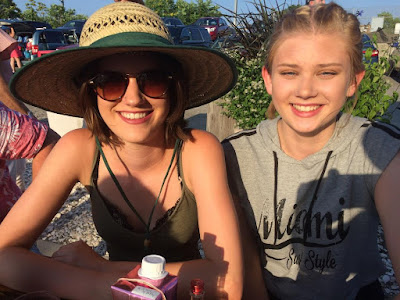 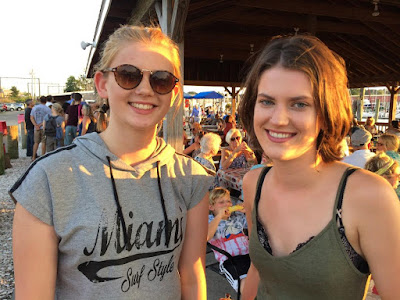 And we had a lovely send-off for Auntie Sylv, whose actual send-off was in England, where none of us were. 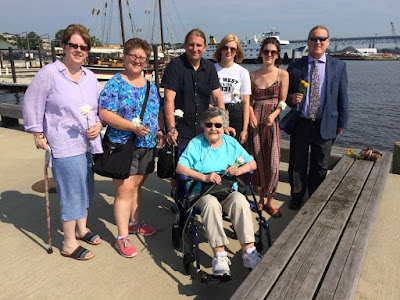 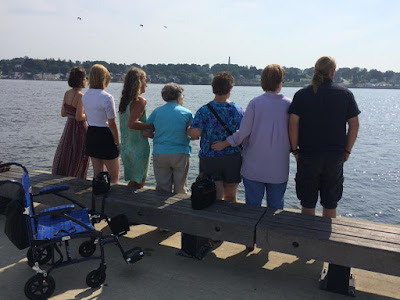 . . . and it was lovely and moving and emotional. 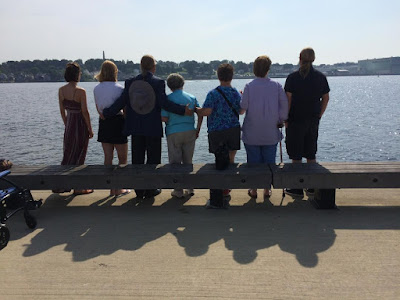 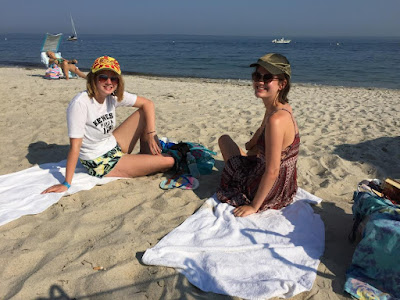 There were beach shenanigans . . . 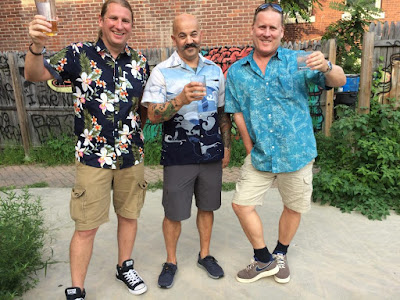 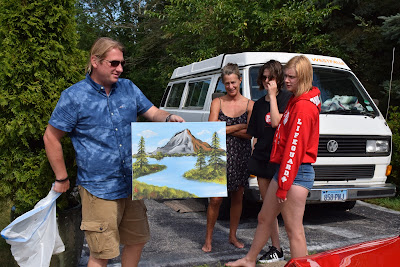 . . . and there was, apparently, lots of painting and artistry. By painters and artisans.

And then in one second the week was over and off they went. Just like that. 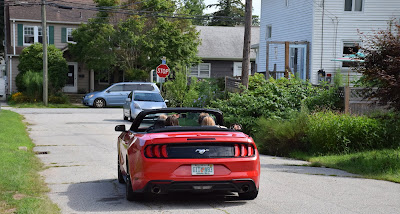 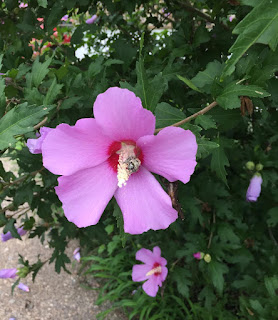 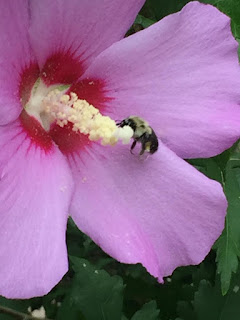 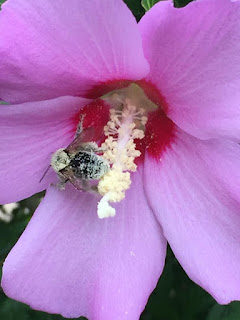 At least the bees stuck around.
at 5:00 AM No comments:

When I drive to the beach -- it is only two miles but for godssake people, I bring all the stuff; I need a car -- and in that car I need to have every window and the sunroof open, and I need to hear a summertime song.

Sirius Radio gives us The Bridge which is perfect for groovin' -- I grew up in the 70s, so oh how I groove -- but although groovin' works for most moments in life, for going to the beach? Not so much. No, I need to turn the dial one notch down, and tune into the 70s on 7.

Which brings me to today.

Today, I am calling it a One Hit Wonder Day. One and Done. That's all, folks. That's all she wrote.

Hey, it's August. Everybody on the Planet Earth should be at the beach or toasting their Auntie Sylv or gardening or making rum drinks or visiting colleges or reading books or star-gazing or eating goldfish or biking or listening to baseball or singing pop tunes or for the love of petessake, soaking in this summertime because it's August and August is the real deal, people.

So in the spirit of 70s on 7, I'm declaring today One Hit Wonder day. 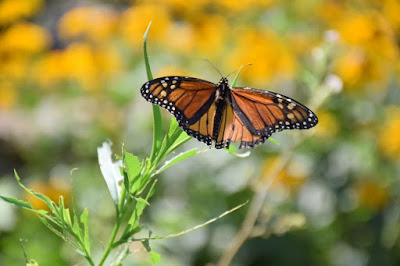