When Mumsie found herself in one of her regular visits to the hospital during the last few years of her life, and we found ourselves with her in her room, and a nurse or a respiratory therapist or a doc or a HUC or any of all the peeps who helped her entered her room, everyone -- every single one -- said, "Name?" Mumsie responded appropriately. And then, also, every time, "Birthdate?"

Aw Mumsie. That British Mumsie of ours.

We made *so* much fun of Mumsie, and told her she should make a sign that said, "Eight-Thehrty-Thehrty" so she wouldn't have to keep repeating herself.

And then we decided to make the sign for her ourselves. In the form of a hoodie. A lavender hoodie. For Madame's 85th Behrthday. 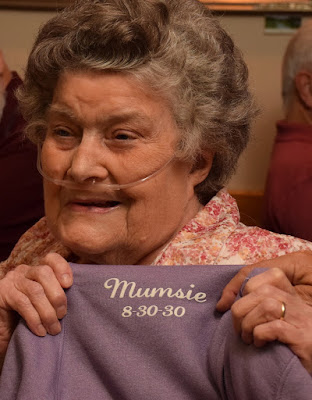 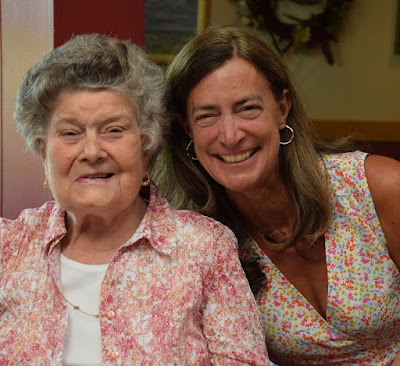 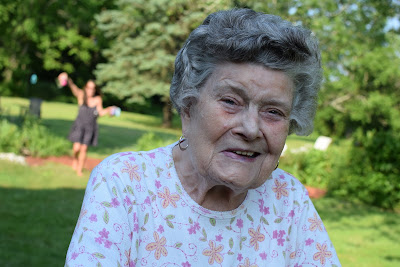 This is my second-favorite photo of the two of us. We used it for Mumsie's obituary in the paper, and for the funeral cards.
Inexplicably, I got cropped out. 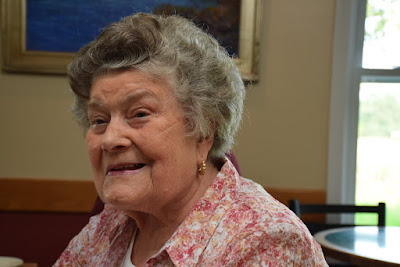 Anyway, Mumsie loved the sweatshirt and wore it well. She even substituted it for her "trusty cardigan" on special occasions.

When Mumsie died almost three weeks ago, we had a hard time tracking down her belongings. We couldn't find them in her first hospital room, or the room she was moved to. The staff scoured closets and the ED, but nobody could put their hands on the elusive green bag. "Oh welllll," I thought. "It's probably just old going-to-the-hospital clothes, anyway."

Mistah informed me, however, that Mumsie had worn her beloved "Eight-Thehrty-Thehrty" sweatshirt to the hospital -- that was what nobody could find. Which was not a happy thing to hear.

As a last-ditch effort, Mistah called the funeral home to see if they had it. He emailed Kelly and me later in the day, with the subject line:
The Green Bag. "THEY JUST FOUND IT AT THE FUNERAL HOME!!!!!!!!!!!"

I went to the funeral home the next day to pick it up, opened the bag to make sure it was truly Mumsie's clothing, and saw: 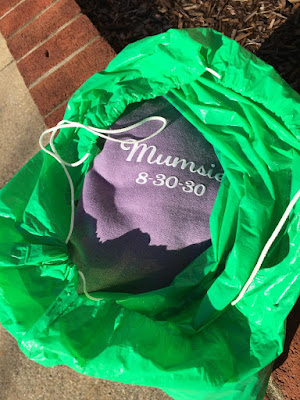 Kelly asked us the question I was hoping she'd ask: Since we had given it to Mumsie, would we like to keep the famous sweatshirt?

"YES PLEASE." I responded. "I would be honored and I will wear it with pride." 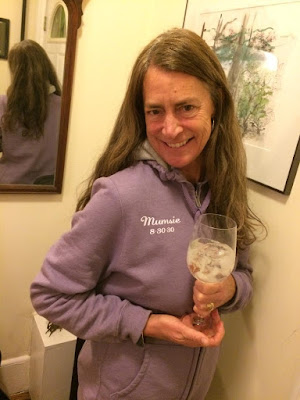 Again my beautiful friend, you are amazing. I only hope one day to have a tribute as beautifully put.

She will live on in all of your beautiful smiles when you remember her.