The middle school years are rough. The rules for everything change, especially the vernacular. Are they kids? Pre-teens? Punks?  Do they play? Hang out? Chill? Are they dating? Going out? Text buddies? It’s impossible for a parent to figure this stuff out, much to the relief of my 7th grader. He humors me, but I can see him laughing on the inside. I still find it hard to believe that I’ve become such a source of embarrassment and shame for my children. I’ve got to figure out how to talk the talk, then they’ll be glad that I’ve volunteered to chaperone the first dance! I can’t wait.
The social world seems to be both huge and suffocating in middle school. I think that my boy is doing a really good job of navigating the treacherous waters of balancing old and new friendships, and figuring out how to handle himself in dubious encounters. He’s testing the water, trying on a few new personality traits, and figuring out who he is.
When we changed schools this year, I told both kids that this was an opportunity for them to be whoever they wanted to be. If they had fallen into patterns of predictable behaviors and less than rewarding friendships, this was the time to start fresh with a new outlook. Both of them embraced this concept, and the conversations prompted all of us to reflect about the kind of person that we want to be, and how to surround ourselves with friends who support rather than hinder that.
Without going into too much detail, I’ll say that my boy has had a nagging issue that’s been left over from his old school. He’s been talking about it, clearly troubled by the dynamics of a friendship that is changing. I’ve tried to coach him without going all mama-bear on the situation. Much as I’d like to open up a can of whoop ass on anyone who treats my baby badly, I just wanted to listen and encourage, and trust that he’d do something when/if he reached the breaking point.
Apparently, that breaking point was reached yesterday, and my boy told me that he’d spoken up about the things that were bothering him about this friendship. It didn’t exactly go well, the other kid stomped off and ignored my boy for the rest of the day. It was upsetting, but my boy was clearly relieved to have finally done something and now all he could do was wait to see how it would go down.
My boy’s saga was running through my head this morning as the kids went off to school. I wondered how it would go today, and whether or not there would be awkwardness between the boys. My mind wandered to the fact that they are getting to the age when disagreements won’t be handled by nervous silences and mumbled apologies. It occurred to me that, historically speaking, boys sometimes fight-fight! Holy shit, I thought. I would freak the frack out if I got a call from school saying that my boy had been fighting. I kicked myself (metaphorically, I’m a lover not a fighter) for not talking more with him about the importance of peaceful resolutions. Then I sighed and laughed at myself and went about my business. As if I’d get a call from school. As if.
I didn’t recognize the number when my cell phone rang, and it was out of character for me to answer an unidentified caller. But I did.
Dun dun duuuuuuun
It was the principal!
I was so caught up in my reeling thoughts about how psychic and intuitive I am about these things that I hardly heard the words coming out of the phone. Wait… did she say police? WTF? My boy??
Screeeeeeeech. Full attention.
Apparently, a police officer showed up at school this morning and requested a visit with my boy. The school is legally obligated to make students available to social workers or law enforcement officers, so they fetched my boy out of class. He walked in to the office, and the officer confirmed his name, then asked him if he’d ever attended a certain elementary school. My boy answered no, and was summarily sent back to class.
The principal was just calling to let me know about this bizarre case of mistaken identity. Just to give me a little reality check, and freak me the frack out, I guess.
At least I found something to blog about! 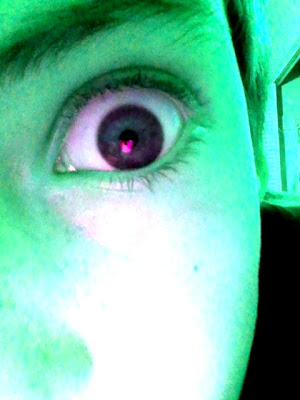 And that must have totally freaked *him* out! Unless he was totally chill while hanging out with the officer.

Nice one, Jacquie. And yeah, good luck with that whole puberty thing.

Good grief...what a scare! Be sure to let us know what happened with his friend.

Ringing phones will scare you for the next seven years...be prepared
Love, Pat

HA! That is such a great story!!! I would have pee my pants I think (which would not have helped at all).

I'm sure your boy will handle it [the next few semi-gueuling years] all as well as can be expected for a young man hopped up on hormones ;-) Good for him for asserting himself!!

Can't wait to see you and your girl this weekend!

Ellie- He was totally, annoyingly unphased by the police incident. I drove him crazy with questions about his feelings, natch. When he complained, I said: "Dude, it's not every day the po-po comes looking for you at school! is it?"

Pat- the friend continues to give the silent treatment. my boy is suffering over it, but standing his ground. Sigh.

Beth - can't wait to see you! let's email about the time and detes.

I love that he's unphased by the whole thing - I love that boy.... Mom

That is one crazy parenting story...and you are just beginning the middle school year!

I look forward to all the blogposts this new era brings :)