Key to my Heart

January in Connecticut is cold.

When we realized we would be facing our first New England winter in 8 years, instead of hitting the road as we usually do, our friends told us, “Winters are much milder now” and “It’s not been all that bad” and blah blah blah.

Tomorrow the forecast says it’s going to be 3º. On Friday, it’s supposed to be 2º. We’re also expected to get our 714th snowstorm of the season tomorrow.

Our friends, apparently, are deluded. Or liars. Or both

What’s more painful is that when we first took off in our VW Westy 8 years ago, on January 11th 2001, we headed straight to The Florida Keys. 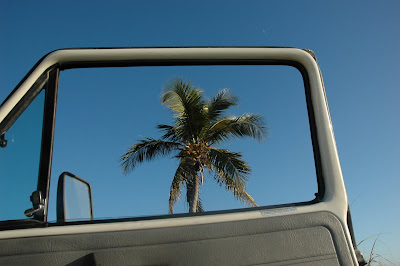 That first year we got to the Keys in 5 days, and stayed for 3 months. It's warm there. And moist. Two of my favorite things. 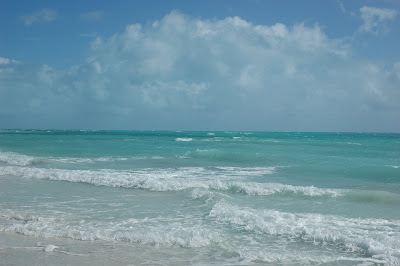 That time, and every winter we’ve been back, we’ve spent most of our time at Bahia Honda State Park, in Big Pine Key. 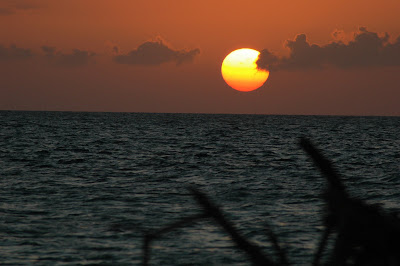 Four of our stints at Bahia Honda (Spanish for “deep bay”) were as volunteers, so we camped for free (including water and electricity), in exchange for working 2 or 3 days a week, for 2 or 3 months. 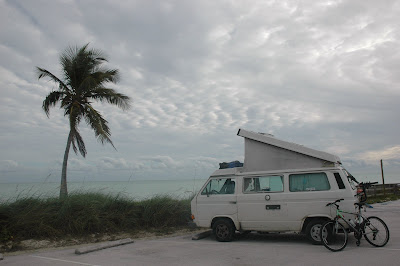 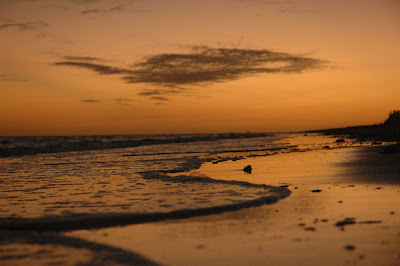 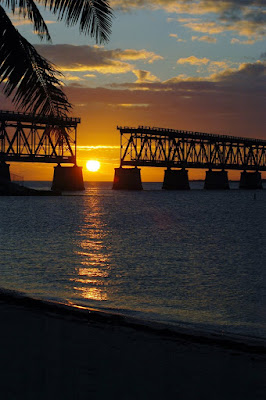 The park's iconic symbol is the old Bahia Honda bridge. 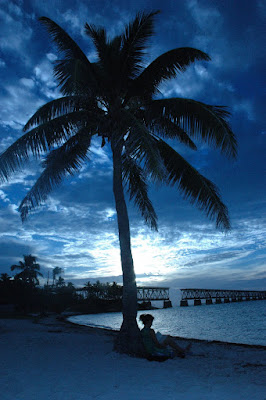 The Bridge has a beauty and a pull that get deep down in your soul. You seek it out whenever you're down there.
.
That's me reading under a palm tree, secretly captured by Bill during his Blue Period.
. 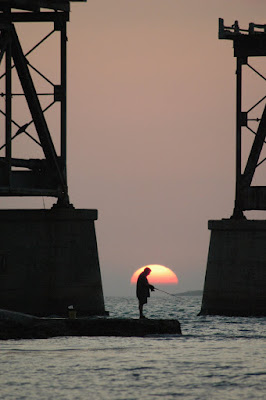 The Bridge is a character in the landscape. Here, for example, you know the Bridge is posing -- it's lured the fisherman to stand just so, in front of the setting sun . . .
.
Bill worked in the Nature Center, out of the tropical sun, talking to the tourists, during many of our Bahia Honda stints (I stuck to the outdoor grunt work), so he knows a lot more about the Bridge than I do.
.
The short version, though, is that in 1904 the oilman Henry Flagler had his people build a railroad from Miami to Key West, an engineering marvel over 153 miles of open ocean, completed in 1912. The devastating Hurricane of 1935 killed 700 people, and destroyed the railway, although most of the bridges survived. The State of Florida bought the right-of-way, and built Highway 1 -- using the railroad’s bridges -- which went into use in 1938. The road through Bahia Honda -- the Keys’ deepest channel -- was built on top of that old railroad bridge.

In the 70s, a new road was built over new pilings, and the old bridge became part of the state park, with a section taken out so boats can pass through.
You can walk up the Old Bridge to catch a sunset -- one of the very best spots in all the Keys. Just like these people, up there on the left:
. 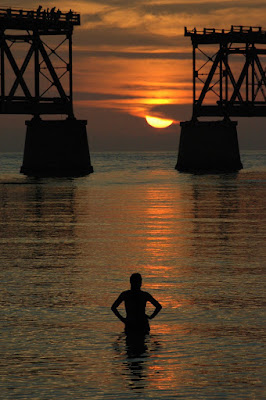 But even better is being in the water for the sunset, like I’m doing.
.
I'm a big fan of Mistah Schleckah's photography, and think he's taken great photos over the years, but that shot is one of my favorites. 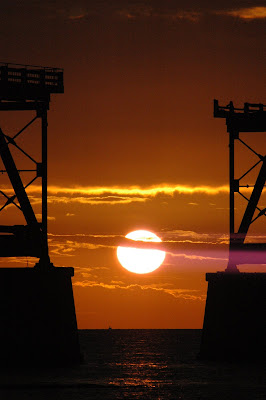 Sunsets are famously incredible in the Keys. They're also incredibly famous.

Sunrises are pretty spectacular, too. 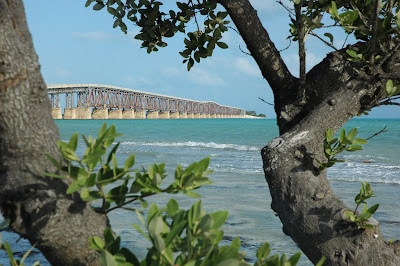 But back to the Bridge. This is the view from the other side -- you can see the break way off in the distance on the right. 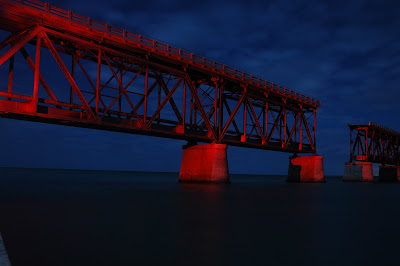 Bill learned how to “paint with light” one full-moon night with John Moran, a Florida photographer. They shone a flashlight covered with a red filter onto the bridge, opened up their shutters for 30 seconds, and let the magic happen. 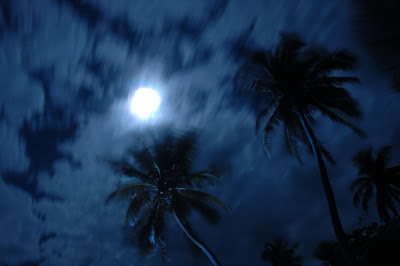 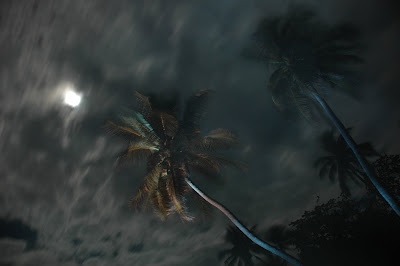 . . . Bill and John had themselves a time that night. 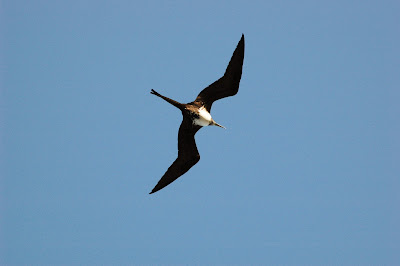 Bahia Honda is full of beautiful birds who stop by . . . 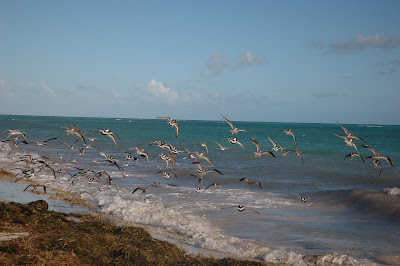 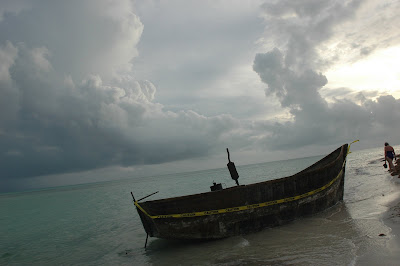 One day last year a boat of Cuban refugees landed on Bahia Honda; they all scattered before anyone saw them.
.
Mistah and I got the oars. 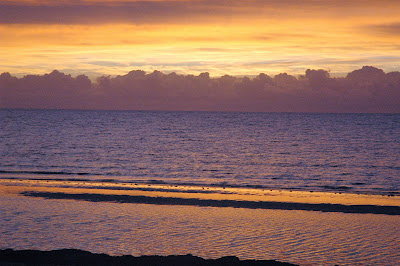 The bugs are bad, and the heat can be killer, but you can escape all trials if you bring a drink to the beach and hang out for an hour or so at dusk. The warm, tropical breeze blows away the no-see-ums and the stillness, and Mr. Sun puts on a daily show that Keys denizens make it their business to check out.
.
It's a gorgeous, intoxicating, magical, place.
. 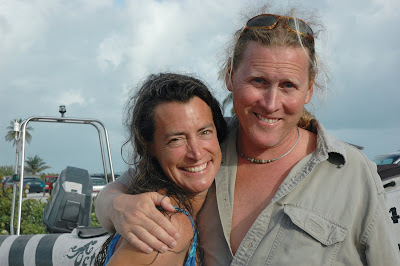 I LOVE that area. Hubby and I look forward to a trip down that way... if I can ever peel him away from the office!

Those photos are incredible! I love the whole "painting with light" technique!

I think my favorite is the very first one with the palm tree!

Anyone who says winter is "mild" anywhere north of say Alabama is deluded.

That looks great. I could easily live there and just write.

I also think I could make that gap given a decent car and a full head of steam...

Mild, HA, 2 degrees is colder than a witches tit (when's the last time you heard that phrase?). Now close to 80 degrees today at the coast in San Diego -- that's mild. It ain't Big Pine Key, but I'll take it.

I think you guys should really plan to do winter a bit differently next year.

I have to say the Florida Keys are one of my favorite places to visit. It would be a heck of a trip now though! Your husband is such a great photographer. He seems to always capture the magic in every place you visit.

My plumber just got back from a week in Cuba and had to go on and on and on about how great the weather was down there. Bastard.

Purdy bridge! My darling sister, I still can't believe that after having the whole country as your big backyard for so long, you chose a place with single digit temperatures to settle down. Family? jobs? I've got 3 words for you: blah, blah, blah

And Beth, I hear that expression from my husband with a frequency that is mildly disturbing. Along with his other favorite similie: "hotter than a cat's crotch", which it IS today, in San Diego. Where normal people spend their winters.

I don't know why you wouldn't continue on your annual trip with a place like that in your history.

First of all, I'm not settled down. I do not settle down. This is a temporary foray into living in a house.

Second of all, the bastards at Bahia Honda did NOT hire us back this year. Or, um, last year either.

Third of all, Mistah Schleckah had to get out of the Westy for a while. He was going crazy. Nuts. Loco. Wacko. And bringing me right there with him.

And I will say this about this godforsaken frigid New London tundra: the peeps here rock.

Oh Ellie....I want to go back to Florida for January (and how about February & March, too).... And I've already got one winter back in CT under my belt. This weather sucks.