Saturday morning when dropping off some forgotten item for my oldest daughter at her dad's house, my middle daughter tentatively told me about a small, hungry cat she'd seen around their complex lately. She was hinting around, so I finally asked her - do you want me to take it home?

Her face lit up, and she took off. I dropped the forgotten item, chatted with the girls' dad, then drove home. By the time I got there, there was a teary voicemail from my girl. She had found that cat - could I come get it?

I told her to send a photo.

This is what she sent:

We spoke. I told her I was on my way; she said she would keep the kitty with her.

So, back to her dad's I went. She was cradling the cat in her arms, which again, did not give me a clear picture of the cat.

We placed the cat in the carrier I'd brought. The cat didn't object - very untypical kitty behavior. On the way home, as the cat made a few strange sounds, my youngest named it Charlie.

Once there, we opened the carrier and Charlie slowly emerged. My god he/she was skinny! Charlie was so skinny it was hard to tell if he/she was old or young. Although it was clear he/she wasn't a kitten.

Charlie was literally a skeleton covered in fur. Very dirty fur. Poor Charlie lilted to one side as he/she slowly walked. Charlie plopped down on his/her side after a few steps. We brought food and water. Charlie wasn't interested. I wondered whether Charlie was going to die right then and there on the basement floor.

I placed the water right to her/his mouth with my fingertips and put the bowl very near to Charlie's face. After a minute or two, Charlie did start to drink. Charlie lapped up that clean cool water for quite a while.

I stroked that dirty, very likely diseased cat for a long time. It took a while for the purr to emerge, but emerge it did. Ol' Charlie seemed to be coming around a bit!

I love me some kitties, but the likelihood of this one harboring disease seemed pretty high, as did a very costly vet bill if I went the keep-at-home route.

On the other hand, what if Charlie just needed some food, shots and loving kindness? We could certainly offer all of that.

As the day wore on (much like this story is) my boyfriend came by with canned cat food.

Charlie still wasn't interested. Although he was up and about, trying to get out of the room via either/both doors.

I fretted about what to do. We decided to take a look at the shelter website. It wasn't very informative about dropping off strays. I called - they were open until 5:30 then closed for the next two days. It was 4:20. Oh what to do? What to do? Keep Charlie? Or take her/him in?

In all honestly Charlie both repulsed me and pulled my deepest heart strings. Charlie seemed so near death, yet he/she was not. There was still that strong desire to live -- to purr, to accept comfort, to try to change one's circumstances (he wanted out), to survive.

The clock was ticking.

With the encouragement of my boyfriend, who reminded me that I actually did know the right thing to do, we loaded Charlie back into the carrier and he drove poor Charlie off to the shelter.

He came back with this: 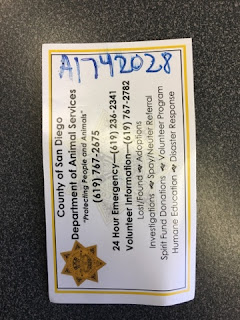 So call I did. It turns out A1742028 was actually a chihuahua. But after some trial and error they found the right record - the emaciated gray cat's record - and the woman from the shelter gave me an update.

As soon as she asked me the first question about how we came to have Charlie I knew he had died. Honestly, I knew it before I called. But I needed the confirmation. Charlie had died in his kennel, naturally. He was not put down by them. They estimated Charlie was 12 years old, and Charlie was a male.

Something about the fact that he died on his own, even if not in the space he may have chosen, gave me relief. I didn't want to be sentencing him to death by lethal injection if they deemed him too sick to revive.

So Charlie is gone. But I've thought about him a lot since meeting him. Sending time with him felt like spending time with someone on the edge of a great mystery, a mysterious transition that we're all going to face, ultimately on our own.

Lovely story! I think you did the right thing .
Love, Mom

Aw, what a sweet story! Poor Charlie. I'm so glad he got to experience some love and water before he crossed the ol' rainbow bridge. You're a good soul, Beffie.

Aw, poor ol' Charlie. What a nice send off you gave him, though. How are your girls? Are they handling it okay?

And so many rainbows this morning!

Beautiful story Beth, you're one of the good guys....xoxo
mom C.