I learned the basics of cooking by watching my mom in our yellowish brown 70s kitchen with the mushroom wallpaper under the shadow of giant decorative wooden spoons. There were 8 of us around the ol' oval, in our assigned seats with a schedule for shared nightly clean up duty. There was always plenty, although I didn't really like anything back in the day (sorry mom, I like everything now. except for disgusting things that shall not be named). We helped ourselves and eventually passed any uneaten portions over to Dad for finishing. 8 is a big group for dinner. The only time I cook for 8 these days is on Thanksgiving or Easter. In my kitchen, it's almost always dinner for 3.

I shared the photo above with my mom and sisters last week, and commented that I never learned to cook for 3. Julie responded with a photo of a similar status. We Coreys cook bigly.

Having learned nothing, the very next day I made meatballs:

I actually thought about putting some meatballs in the freezer for another time, but then this happened:

We feasted on meatballs for a couple of days. They were really good, and I did put a dozen or so in the freezer.

We were not, however, making an adequate dent in that massive stir fry. I brought it for lunch 2 days, I sent it in Clara's thermos one day, and still there was more. I am a huge fan of leftovers, and often find that the food builds flavor after a couple of days in its own juices, but at least 50% of my kids do not agree and turn their fool nose at the choice of meatballs (again) or stir fry (again) for dinner last night.

I had an idea for a solution, though. I tend to hoard take out containers, and often rinse them for reuse before sending them off to the recycling gods. So I warmed up and boxed some lefties, complete with a fork, and handed them out my window to a very thankful guy who was asking for help on one of the corners that I drive by aprox 235 times a day. 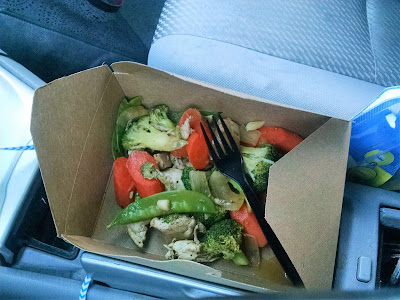 It was a great solution! Win-win, man. I don't know if I've told you this, but despite the very catholic reference in the title of this post, I happen to have a stereotypical Jewish bubbe in me whose greatest pleasure is to know that people enjoy eating food that I've prepared. It is most profound when the eater is of my own bloodline, but really it works for anyone as evidenced by the little whoop I gave when I looked in my rearview to see homeboy digging in to the stir fry right there on the corner. I remembered with glee that I had taken some soup out of the freezer on a recent rainy day, forgetting that it was a solid chunk of arctic matter and that although our bad weather was making national news headlines, it would only be a few hours before the sun poked back out and soup no longer sounded like the thing that anyone wanted.

Therefore, the next morning:


Another win-win. I'm really going to work on getting better at assessing portion sizes throughout the cooking process, because although I really like the solution I found, it isn't a practical plan for a family on a budget. I need to buy less, cook less, consume less, and waste less.

Here's what went into the crock pot for dinner:

That really is a win-win, man! Excellent idea, Jacquie. Who needs an organization to help you help people? (Not that they don't have their place too, but taking it to the streets yourself is dope!).

About the cooking often and too much, I'm afraid I have no advice. I cook rarely and usually barely enough. I even sometimes get resentful that my children what dinner every. single. night! My Jewish bubbe side needs some work...

My ongoing admiration when reading this blog, already significant, just grew by leaps and bounds. You are good people, indeed.

This is really excellent, Miss Lady. Can you imagine getting those fresh veggies delivered to you? Or that turkey soup?? So lovely and generous and perfect.

Plus it all looks so dang good. You're a good cooker, Miss Lady. Just like Betty Crocker.

That is such a great idea, homiGOD. Im totally using it. I used to throw into my car the umbrellas people left behind at work (weddings), then on rainy days have the kids hand them to people getting drenched in the world, umbrella-less. I'm also going to make a point to revive that habit. Maybe this will make up for my clutching my leftovers to my chest when a homeless person asks for them as I leave a restaurant. You're spot on about next day food being one day better. Mine!