We didn't make the grape leaves for Aunt Lill, we made them for me! But she ate a few when we visited last week, and she said they were good. Ah, to win the ultimate approval of a lebanese cook.

I think I've explained that the grape vine I had enjoyed for so many years in the backyard of my workplace has withered up and died, leaving me without a source for this delicacy that I adore. I spotted a house in my neighborhood recently with a few vines across a front yard arbor, but it would be awkward and illegal to climb over their fence at harvest time. Ellie has leaves though, so when I realized that the trip back east for Thanksgiving would include my birthday propah, I wasted no time in requesting a full lebanese feast. In the weeks leading up to departure, we started to talk details and Ellie mentioned that she didn't have enough grape leaves, but she had some. Around that same time, I was sitting in a training meeting on the campus where I work when I overheard participants talking about the beautiful landscaping, including the grape vines that ran along the fence. Suddenly, I felt the need to excuse myself from the proceedings.

It would have been weird for me to make naked that vine right then and there, so I waited until the day had ended, then had my way with it.

I heroically remembered to throw those bad boys into a cooler in my suitcase, they spent a few days in MB's fridge then reached their final destiny at mom's. 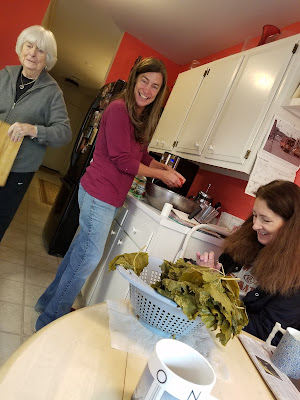 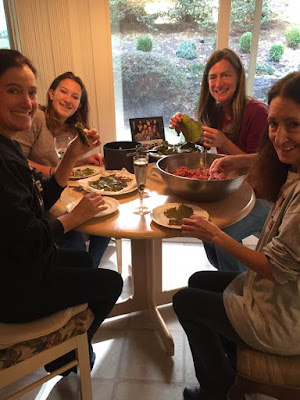 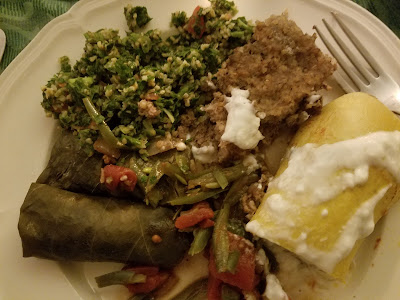 The next day, we road tripped up to Providence for a much anticipated visit with Auntie Lill. We packed a full plate of that delicious meal, which I had in hand upon entering. Aunt Lill wasn't hungry but she wanted to see, so I took the lid off and she peered inside, grabbed a stuffed grape leaf, and popped it into her mouth. "It's good!" She said. Swoon.

I had snapped photos of a few pictures from Mom and Dad's 1978 photo album to show Lill, which were well examined:


Aunt Lill's condition had changed dramatically since the last time we'd seen her, last summer when we toasted her 91st birthday 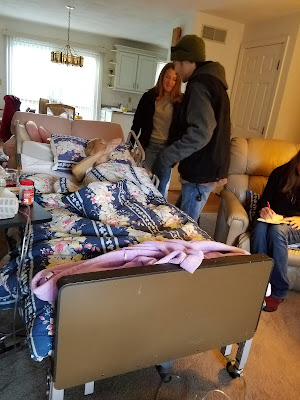 When I showed those photos to the sisters not present, they commented that they were hard to see. I get that, but it really wasn't hard to be there. Lill was frail, but fully present. She had some pain, but was able to boss us all around to fetch and adjust whatever she thought might relieve her. We talked together. Look at the body language in those photos. No one was awkward, no one was tragic, no one was uncomfortable. Except Lill, when the pillow was in the wrong damn angle. We joked about my butt and laughed at memories and just hung out for a little while, together.

When it was time to go, we said goodbye. Like really, goodbye. I looked right into Lill's brown eyes, those eyes that could have been my dad looking right back into mine. We said goodbye.

I'm getting ready to head back next week for a proper Corey send off to the last of the original Corey girls. It will be sad and poignant and funny and beautiful and blessed and wonderful. Just like Lill.

This is gorgeous, Jacqueline. Thank you so much for this.

I love that you (secretly) took photos of our day with Aunt Lill last week. Yes, she was a wisp of a woman, but she was fully there with us. It was so hard to leave her.

And I also love that you did not mention that although *you* heroically transported your grape leaves 3000 miles across the country, from suitcase to fridge to suitcase to Mom's table, *I* forgot mine. Whoopsie!

I love this, Jacquie, and you. See you next week. Our hug will be epic.

Weeping into my coffee....so beautifully said, Jacquie, and it was a wonderful visit.. You forgot to mention Lill kept saying "you're my favorite, Jacquie"....Ellie and I were just along for the ride....I love you....