While Jacquie is away, some of her friends have agreed to come out and play! First in the line up is an old pal from college: Keith.

When I first came to San Diego, I found a room in an apartment that was being shared by two other girls. It was walking distance to State, where we were all students. One of my roommates was dating the guy who lived in the apartment right on top of our heads. That guy had roommates, too. And they were in a band! Can you think of a better formula for fun in college? The band was called Groovehouse, and the singer was a smiling guy named Keith. When Keith wanted to talk to me, he’d hang over the balcony and yell: “Connecticut!” Those were some mighty good times. Keith and I kept in touch for quite a few years after school; his friend Paul met my friend Aline and she and I would go visit them when they moved to the gun club… but perhaps that’s a story for another day…. Once we became so-called adults, we lost touch until just recently, when we reconnected through the magic of facebook. I missed Keith, he’s one of a kind. And when I asked if he’d do me the solid of writing in my place while I’m off frolicking, he jumped right on board. And look, just look at what he gave us:


The Farm In My Backyard
Keith Boyd

My wife has a fondness and affinity for animals that verges on the Doctor Doolittle variety. In the time we’ve been together (is it really possible that it's been almost 16 years!) she has raised or adopted dogs, cats, fish and now chickens. Yes, you read that right, chickens. Our suburban backyard has become somewhat of a test-site for the various farmery impulses that overtake her. So along with the tire-stacks growing sweet potatoes, the “recycled” wood (read gathered from various trash cans on our street) raised beds for vegetables and the self-taught masonry which delineates the herb patch, we now have four interesting, and actually quite beautiful, chickens with a coop.

As I mentioned before, my wife is actually amazing with animals. She seems to intuitively understand what it takes to raise sweetly tempered and loveable pets. Our first dog Louie was a prime example. Louie was an African mutt that Kim adopted when he was about one hand length in size. He was Kim’s constant companion during our years in the Peace Corps and every time I would see him his temperament seemed to drift closer and closer to that of some Tibetan Buddhist Saint. This dog exuded a gentle and quiet understanding that was simply disarming. You’d offer him a bit of meat from the grill and he’d almost apologetically take it from your hand. You’d come home from a hard day and Louie would rest his head on your lap and looking up into your eyes simply melt away all the accumulated badness. Our current dog, Moxie, is another wonder of loving kindness wrapped up in a dog body. She will curl up in a ball on your lap and proceed to lick any available exposed skin in a Motherly and loving way. Although I’m sure that many people would say that they love their animals or think that they are great, our animals seem to go it one further and exude the unconditional caring and sweetness that Kim brings to their lives. In a certain sense I see the reflection of her in their behaviors and in the ways they fit into our lives.

With that being said there are also the ways in which these furry family members have learned to take advantage of their situation. My wife and I are both teachers and while we bring a ton of energy an creativity to our jobs we like to save the best of ourselves for family time. That is of course until Friday night. After a LONG week of planning, meetings, IEP’s, lessons, fight breakups, paperwork and parents we find ourselves rather deflated come Friday night. So in those cases it’s pizza/video night and we kick back with a cold drink and relax. Well to put it mildly the animals have figured this out as well. So after their long days of….hmmmm….let’s see….sleeping (?) they like to, how do I put this, colonize Kim for the body warmth. It all starts out innocently enough. Moxie will come along and stare at Kim with her wide set eye that look in different directions, basically begging to be pet. The cat sees this and pours herself from a high perch and proceeds to form herself into a ball on Kim’s lap. Then the real manipulation starts. Moxie will wedge herself face forward between Kim and couch. Sheba (the cat) will form an unmovable ball on Kim’s lap and before too long the three of them are sound asleep. The animals get yet one more soft, warm place for a nap and Kim, surrounded by all of that warmth and love, falls into a deep slumber that lasts until I shoo her hypnotists away. In the case of Moxie this isn’t too big of an ordeal but the cat is a different story. Not only does she get surly about it, she gives me this seriously ticked off look that only a cat can give. All of this is to say that in a very real sense these animals have made Kim one of their own.

Now we come to the chickens. Kim and I both love gardening. We are amazed all over again when the seeds and seedlings we plant bear wonderful, ripe vegetables for our summer dinner table. I suppose that might be the root of things but my lovely wife likes to take the ball and run so to speak. We’ve had mountains of top soil dumped on our driveway. We’ve started a seriously smelly compost heap that seems to grow on its own. We’ve got worm bins set up for table scraps and now we’ve got chickens. The chicken arrived all at once and along with them supplies for a coop. Originally there were three birds; Goldie, Ethyl and Oddball. We weren’t sure what the sex was for any of them but Kim was “sure” they were all female. She said she just had a feeling. Well feelings, it turns out, aren’t always great at telling what sex a chicken is and Oddball was a rooster. This we found out the hard way when one early morning he announced himself with a horridly loud and broken sounding call. I suppose that this call was his burgeoning sexuality asserting itself because within a day of his crowing’s start he began courting the chickens. Let me just explain for a second that Oddball was a Bantam. This designation was one of the many things about poultry that I have learned this year. So being a Bantam, Oddball was on the small side. The girls however were full sized chickens and let’s just say that all of the poor boy’s advances were both bodily and verbally rebuked. Too see a small horny rooster literally bounce off of a disinterested full sized chicken gives new meaning to the word rejection. To see him do it about 100 times a day is just sad. What with his “amorous” ways and his loud calls, Oddball had to go. Through the miracle of Craigslist Kim found a suitable home for him and in his wake we now have four lovely chickens. In addition to those mentioned above the newer chickens are Cleo and Cowgirl. I’ll say this about them, they are beautiful birds. The same love and care that Kim pours into everything she does is lavished on them as well. Their feathers shine, their eyes are clear and wonder of all wonders 2 of them have started laying eggs! These eggs are simply amazing. Once we got my younger daughter over wanting to keep EVERY single one, we’ve had some lovely scrambles on the weekends. I also enjoy watching them wander through our backyard from my perch in the hammock as they strut around like feathery dinosaurs eating bugs and taking dirt baths. It turns out I sort of like life on the farm.

So my wife is a combination of Farmer Jane and Doctor Doolittle. It could be much, much worse. In fact when I stop to think about it or when I see her in the animal nap pile resting comfortably, I think we’re actually all pretty lucky. The gentle love and caring attention she devotes to those around her reflects back and creates in our home what home should be, a wonderful refuge from the cares and currents of the world. 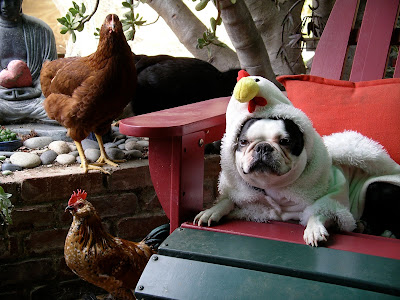 Haha! The image of Oddball bouncing off a disinterested chicken is too much! And the thought of fresh eggs makes me wants to raise some chickens in my own backyard - but sadly we don't all have Kim's touch with animals. I tried taking care of chickens at camp when I was a teen, but I just couldn't develop an affinity for them. The pigs were another story though. Mmm, fresh bacon.

And although it's clear you do love your animals, wow do you love your wife!

Thanks for guest blogging, Keith. We'd love to have you back any ol' time.

I am probably going to print out that photo and have it framed. Unless you forbid me from doing so.

P.S. We subjected our Barkley to the indignity of that very chicken costume, but luckily for him, he outgrew it. And we have 12 hens and one very busy rooster.

Kathi D, I thought of you when I read Keith's blog post -- you were my go-to chicken blogger before ol' Keith showed up on the scene...

Thanks so much for joining the party, Keith! Fame and wealth are now yours. No really!

Oh no, you mean I missed out on the fame and wealth? Bummer!

Aw Keith, thanks so much for sharing this lovely little slice of life. I'd very much like to visit your little farm and your happy family. We're way overdue for a visit!

LOVED it Keith...Kim is very lucky to be so adored by you and you are blessed as well! Can't wait to visit the farm.
p.s. we have a Goldfish named Goldie, who has turned out to be a fellow goldfish killer! hahaha