I got an email the other day with the photo below

SUNSET CANDELIGHT LABYRINTH
Sat. October 15, Law St. Beach 5:30 – 7:30 pm (sunset 6:21).
I read the email quickly, but knew I wanted to go, and wanted the whole family to check it out with me. We decided that arriving at 6 pm, to see the labyrinth before, during, and after the sunset would be ideal.
By some miracle, we got there right about 6 pm. But the beach seemed surprisingly empty. Where exactly was the labyrinth? Where were the all the peeps? Turns out that my quick skimming of the email details did not allow me to  pick up on the fact that the project would not get started until 5:30. So, our venture changed from labyrinth walkers to labyrinth makers.
Yes, we jumped in and started a kick ass family assembly line: I was the official bag opener, while the older two girls scooped sand into said open bags, then handed them off to Tommy to fold.

After we amassed quite a collection, I dropped in the tea lights, 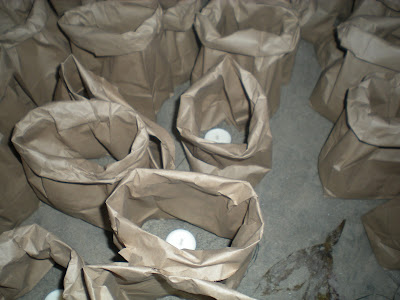 and some other helpful folks carried them on down to the labyrinth, which was finally (almost) complete. 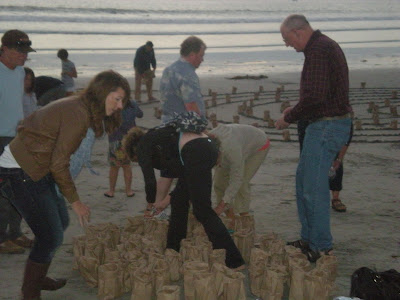 We probably put together a third of the lumineria needed to light the labyrinth.


Tommy got a hold of one of the lighters and was busy working on lighting bags until past dark. 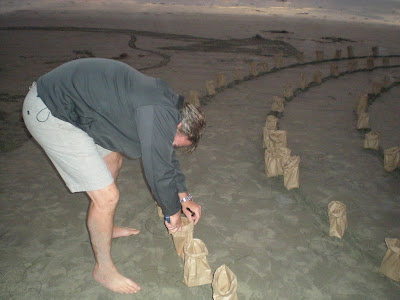 The rest of us checked out the tribute to Steve Jobs area, enjoyed the setting sun and each other, and partook in some essential sand art. 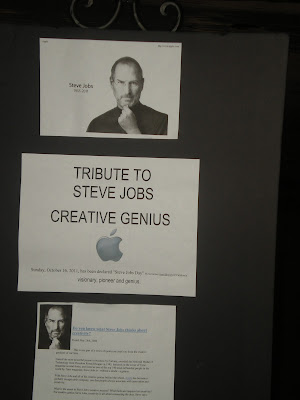 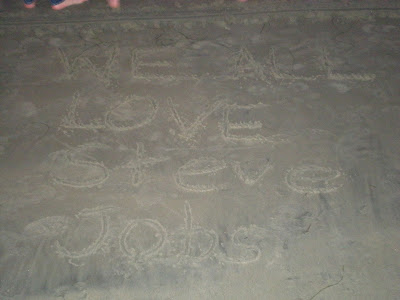 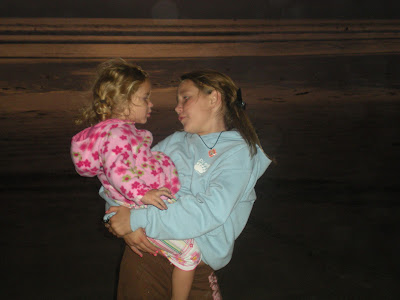 But the sun was down, the labyrinth was alight, and it was time to walk it -- with all the folks just arriving. And although it would have been cool to simply show up and walk the illuminated labyrinth, it was all the more cool to help in its creation. Not sure what the message is....sometimes it's good to speed read your emails?

What is a labyrinth?
Labyrinths have been around for at least 3500 years, in countries all over the world, including China, India, Israel, Ireland, Southern Europe, Scandinavia, Pre-Columbian North America, and England. They have been found all over the world in different historic periods: at Neolithic and Sardinian and Hopi rock art sites, in Hindu temples and Taoist shrines, bordering Minoan frescoes and in Roman mosaics. They have been carved into rocks, turf and wood; engraved in metal; laid out in stones; woven; set in tile, painted and drawn.

The labyrinth is a nearly universal form and comes as close as we can to an archetype. An archetype is a symbol that appeals to us at an unconscious level. We don’t have to struggle with its meaning intellectually. Its symbolic meaning is somehow ingrained in us, part of our very nature. It is a symbol of our journey through life, the unity of our life path and the center that awaits wherever we are on the path. Because of its lack of complexity, it can be used as a meditative, relaxing, calming, centering path to walk and clear your mind.
at 8:57 AM

awesome..I'm so impressed. I think it wold be a cool idea for a teenager's b-day party.

Sometimes it *is* good to speed read your emails, Beth. I love this. It's so lovely and so San Diego and your peeps and your *sand* is so gorgeous.

I miss you all.

And I LOVE your lumineria labyrinth.

love this, Beth! what a nice memory you all created together. I love that photo of your biggest and smallest :)