Out with the old

We are moving our offices. Someday. Maybe. Unless we downsize here instead. Or go totally virtual.  We've made the decision to do something. But no one yet knows what that something is.

Regardless of our total cluelessness, we are working on getting rid of all manner of crap that has accumulated over the 10-plus years we've been in this office space. And most of it has fallen to me. By choice. It's definitely a change of pace, and allows me to blow off some of the other monotonous, but less physical work I could be doing, plus, I'm in the office more than any one else who works here, so why not me?

It's been quite interesting, I must say. I don't typically stop to think about how much has changed in the last decade, but when it comes to office procedures, well, let me tell you, it's a whole different world.

I work for an online publishing company, and when we started, we actually sent out our product on floppy disks!! Floppy disks, people, and we had to use this little "dongle" to lock up the files, manually, so they couldn't all be copied and our intellectual property stolen away. We next migrated to CD, then offered the service on both CD or the web, and now, of course, it's completely web-based. Things have changed.

All the incoming manuscripts all those years ago? They came in on floppy disks as well. I took a photo of these guys below when I came across them, overcome as I was with nostalgia. 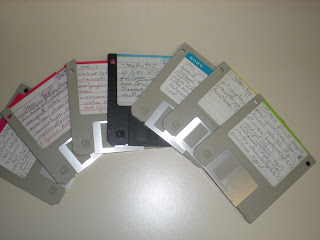 But then the next day, I came across the mother load! 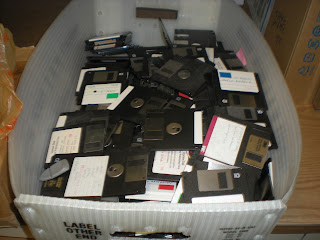 Look at all these!! Can you believe we still have these laying around? It's probably time to let them go. Although my boss did protest a bit (but then there are 6 boxes of old files and research materials that he moved from our prior office 12 years ago, that have yet to be opened since we've been here, so there you go).
But I digress...I also came across a box containing various stamps. Yes, stamps. Stamps that require stamp pads. 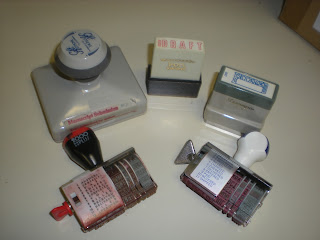 Get a load of these antiques! We used to require a printed-out hardcopy of the manuscript and a file on disk. We would stamp the hardcopies, and then put them in a queue to be copyedited. Does that not seem demented?! I still don't get why we required a hardcopy, as we copyedited on our computers, but I'm probably forgetting some of the fine points. It was a million years ago.
And what about this beauty below? Nice microphone! Too bad it's so small and unassuming. I'm not even sure what we even used this for, perhaps a focus group or some other presentation. It's so Michael Jackson before he started turning white, is it not? 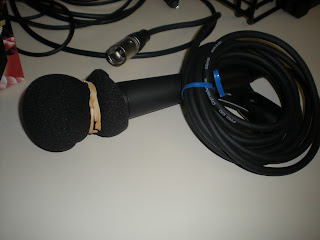 This little project of mine also requires that I wade though all of our various marketing pieces. There are a lot of these. This is the very earliest I've come across. It was created before my tenure. 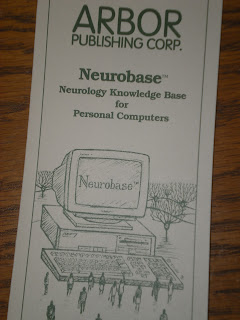 I simply love the "for personal computers" bit. It's hard to believe it's the same product/company; it is simply so 20th century.
The grunt work has been a real reminder of how much different and easier so many things are today. Technology is moving so fast. Warp speed, I tell you. When I started we had one email address for the office. One! And we could not get rid of the CD for the longest time because people simply did not have cheap, reliable Internet connections, especially abroad.
To think that I'd be lost without my smart phone in 2011 was incomprehensible.  I mean wtf is a smart phone?  And wireless access on a plane? And YouTube, and Pandora, and Google, and the rest? It's amazing. And exciting. And you better not get left behind.
But if you do, maybe you can sport one of these groovy MedLink button downs I found a random box of today. 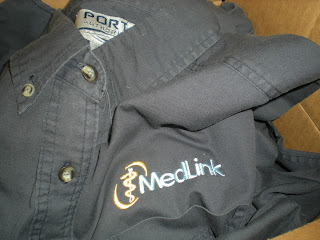 Have fun cleaning and heaving. I think you will look fetching in that shirt.
Things change so fast...we didn't even have computers my first few years of working.
Love, Mom

I've been at my job even longer than you've been in that office - I recently went through some boxes that hadn't been opened since the dark ages, and I found the typewritten newsletters I used to send out - on typing paper! Remember that stuff? I still have the fancy typewriter that was such a big deal, I've been meaning to give it to the kids. I also found the actually floppy disk, the 5" ones? We used those in COLLEGE, for God's sake. Can you imagine?

Your purging does somehow sound fun, bet you'll get a few more blog posts out of it :)