Early next week, I’m going to show you the … ummmmm… interesting birthday card that my younger child made for me this year. It was weirdly sweet, and got me thinking about all the treasures that we bloggers undoubtedly made for our mommies way back when we were still sweet.

“What’s the most memorable item you ever made for your parents?”

The first thing that came to mind for me is a Christmas ornament I made for mom, and if you try to tell me that it is anywhere other than on her tree every December, I will cover my ears and bellow a holiday jingle.

The ornament I made is a beaut – it’s a pair of bells, magically appearing to be captured mid-tinkle. The base is cardboard, but it is pimped out with white felt and bric-a-brac details and I could be wrong, but I think there is some golden tissue paper decoupage at play here too. But the crowning glory of this piece is the earrings that make up the ringer thing. What is that thing called? … oh, it’s a clapper. Who knew? Thank you for coming along on my wordsearch journey. Now where was I? Yes, the clapper. The clapper on the glorious bell ornament that I made (with my own two precious little hands) was cut from cardboard, but festooned with a pair of precious stones hot glued to the business end of a pair of clip-on earrings!

Oh yes, be impressed. By stone, I mean rock. By rock, I mean… rock. Pebble? I distinctly remember the surge of pride I felt as mom gushed over this masterpiece that was so much more than just a holiday ornament. It was jewelery! I assured mom that the earring were meant for wearing, the bell was merely a vessel. But she knew a priceless gem when she saw one, she wisely decreed that the earring shall forever remain on the Christmas bells, wrapped and revealed with the upmost of care and respect each and every Christmas for ever and ever. Amen.

Ellie:
Oh, Jacquie, I remember that ornament. It is beautiful. Gorgeous. You are an ar-teest.
.
Looking for photos in the basement the other week, I came across a folder of cards and stuff I made when I was a kid, for Mom and Dad and for school. What a freak I was. And, apparently, a holy roller. Check out this Mother's Day gem; I think it must have been when I was 7, and in second grade, about to make my First Communion:
. 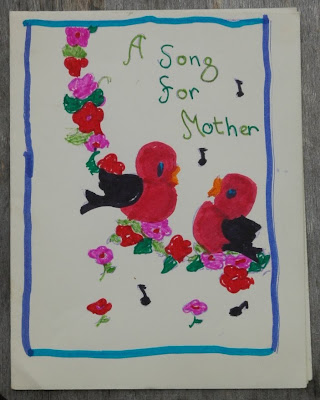 That's the front. A song for Mother? 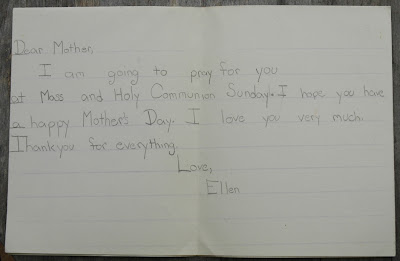 Mother? Ellen? When were we ever not Mom and Ellie? Clearly the nuns put me up to that........ 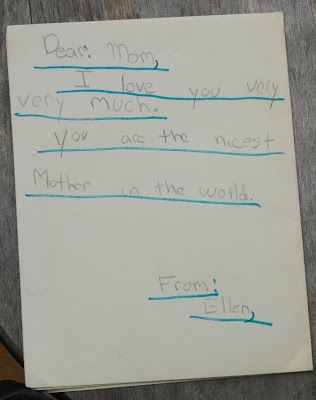 Here's the back. You gotta love the secondary note -- can't have a blank back page, now, can we? And again with the Ellen. But at least I called Mom Mom.
.
And Mom? You are still the nicest Mother in the world. The whole wide world.

Beth:
Hmm. This is a hard one. I don't remember many of the gems I undoubtedly bestowed on my mother. I do remember a barrage of those "woven," extremely bright, multi-colored potholders that seem to making a comeback. Curiously, I don't think they were ever used in the kitchen, but maybe that's because they were to beautiful to sully?

I also remember a colored sand creation that I made at camp. You know, one of those washed out, de-labeled babyfood jars, that you oh-so-carefully drizzle the colored sand in, one color after the other (mine mostly pastel shades).

I still treasure the ornament Jacq, it has a place of honor on the tree every year, and I love your card Ellen, love Mother

Ellie, errr, Ellen, you and your Mother are holy hoots..truly!