So, I  whined about mentioned what a difficult time I am having trying to scrounge up the holiday spirit this year.  Have I mentioned that my husband is part elf? I really think that a large part of my problem is the fact that he inundates the world with Christmas music for all of December, which is fine, except that when it comes to merry tunage he is not nearly as concerned with quality as he is with quantity.  Bad Christmas music brings out the bah-humbug in me. Bill.
I have, however, felt the spirit in fits and jolts. How can one not get up and dance when the Disco Wonderland float passes by during the OB Christmas parade? 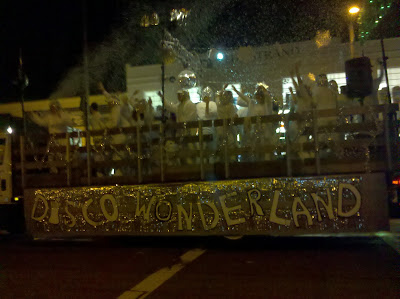 And on the day we tried to take Christmas card photos, we stumbled upon the most adorable holiday craft fair that I’ve ever seen. I bought a few things, and saw a flier advertising a locally owned tree lot just up the street.
We hadn’t quite decided yet what we would do about a tree this year. We’re going to be away on the holiday proper (note to prospective thieves:  the house will be protected by neighbors, ninjas and our beast and her keeper so don’t go getting any ideas), so it seemed kind of silly to go through the whole nine yards and then leave it to rot while Santa found us elsewhere.  We decided to get a small tree, maybe a table top number, and to put out the just the most special household crap sacred and tasteful Christmas décor.
So when I saw that flier, I thought it would be a perfect time to embrace the spirit of the moment and go grab a tree. The kids and I were traveling Westy-style that day, so it would be a breeze to pop a little tree in the back and surprise Daddy when we all got home.
We headed over to the little lot, where we found a great heap of nothing. The trees were so lame, and the one that I liked already had a stand on it so they wanted to charge me an additional fee, even though we have a stand in our garage. Puh-leeeeze. We headed home, but at the last minute I pulled a rock star mommy move and veered into the parking lot of a big home improvement store.
Now this is interesting because I am notorious for being uninvolved in the picking out of Christmas trees. Even in the merriest of years, I prefer that my relationship with the tree begin after it has been erected in my house and the lights have been strung.
So in I walk with the kids in tow, just to see what they’ve got. Naturally, there was a special sale going on right then and there because they were overselling the smaller trees. So the big trees were cheaper.
I resigned myself to the fact that we had to get one, and did what I always make my husband do when we want to see how a tree looks standing up: I grabbed one by the trunk up toward the top half and pulled it out of its little cubby space until it stood proud and tall….and then tried to keep a hold of it as it went barreling down toward my unsuspecting children’s heads.  (You know how people are always exaggerating about stories like this? I’m not).  I dropped the tree and almost took them both out. Then I summoned a guy, who stood in for my husband and held up several trees for us to praise or reject until we had found the one that would be ours.
Remember, we were in the Westy, so it was no big deal to pop a little tree in the back and bring it on home. 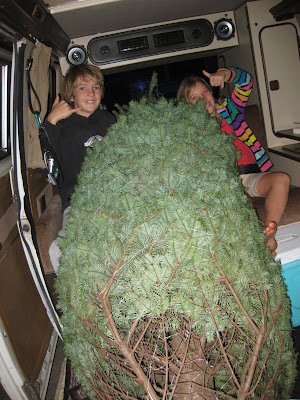 I think we’re going to need a slightly bigger table.
at 5:00 AM

Ahh..the perfect Christmas Tree story...and the perfect mode of transportation to bring it home. One benefit to Central PA is being surrounded by mom and pop "cut your own" Christmas Tree farms. (we used to drive a little further for the $15 tree, but now we settle for closer and $35)
Not sure what my kids will do when they venture out in the real world and realize that not every place has a tree farm up the road ;)
Wishing you a fantastic, albeit COLD Corey Christmas!!

Oh how I love that photo. And how that reminds me of San Diego Christmases Past, when Schleckah worked at the Pay-atch and brought home a very merry Christmas tree for us all.

*Love* that your table-top tree became the biggest tree in the lot.

First of many Christmas trees in the Westy is my guess.

Do you think that you'll be on the hook to bring home the tree every year from now on, since the children didn't die in the lot? Just tell Bill to get that idea out of his head, right now. Then tell Schleckah to get his ass back to the Pay-atch and bring next year's tree home in HIS Westy :-)