A thought occurred to me today when I put this incredibly adorable dress on my girl -- this dress has been around! 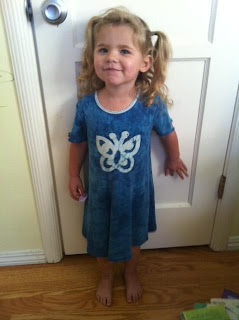 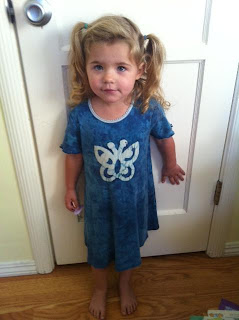 If I'm not mistaken, this was originally Chapel Hill/Quito girl's. Then, of course, it was her sister's. Next in the rotation would be Jane's girl's turn, from which it would have been handed down to Jacquie's girl.

That's as far as the Corey lineage goes, but the dress drop-off does not stop there, oh no. It was next handed down to my middle daughter, who in turn handed it off to her little sister.

That's as many girls as I'm having. But don't worry, my brother just had a baby girl last fall, so she will be wearing it in just a few years.

Many of you know how I love thrift stores and hand-me-downs and saving money, but this dress? Well this dress is beyond even my wildest dreams.

love! From where I sit, I can see a photo of my girl in that very dress.

Loved looking at all the linked pages, too!

And then it can be saved for the next generation!
Love, mom

Oh how I dearly love. I love that dress on every one of my nieces, and I love my dress on *your* girls.

The only thorn on my rose of contentment is I'm not the one who bought that dress in the first place. THAT is rock-and-roll-super-star-dom.