Have you ever been to an AMVETS Thrift Store? I just found out, via the AMVETS website, that they only have stores in 20 states, and that most of these states have only a handful of locations. This is a complete surprise to me, I thought they were all over.

It seems though, in fact, that they have just happened to be in the cities I’ve lived in.

I’ve unwittingly been taking for granted the fact that I have access to the best thrift stores ever.

Kelly Cronin, an acquaintance from high school, who was way more mod than me (I think you’d call that look “gothic” these days) was the first person to introduce me to AMVETS. She dragged me along with her one day after school let out. I’d been to a thrift store before, but not like this one. It was big. And stinky. And a little bit scary. It was not in the greatest neighborhood of Baltimore -- a city full of not-so-good neighborhoods. But Kelly found some amazing clothes, and even I, in my semi-anxious state, was able to come away with a few things. The most amazing thing, of course, was the price.

I don’t remember the AMVETS prices then, in the mid 1980s, but today’s prices range from 99 cents to a couple of bucks for most of the kids clothes. I love taking a $20 bill in there and seeing how many outfits I can get for my daughters. Some of the stuff is crap, of course -- it does take some sifting through, but you can find some high-quality, gently worn clothes in there. Obviously I’m not terribly label conscious, or I wouldn’t even be able to walk into a place like this, but here’s one label-dropping example for you, I found this darling Baby Lulu swim cover up for $4. 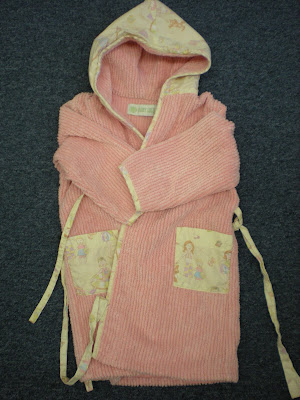 Baby Lulu, a line of designer children’s clothes where the cheapest thing they sell is a headband for $12.50. That’s a good find.

I, like Mistah Schleckah, enjoy the feeling of triumph after an especially good find. Remember this one? The very-Don-Johnson-tropical-white linen suit? 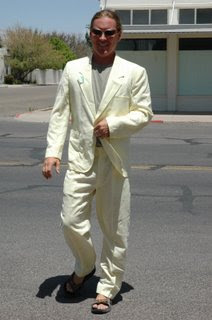 What I also like about AMVETS is that they come pick up all of your old, worn out gently used clothes and household items. You just schedule a time, leave it on your front porch with their name on it, and they come haul it away.

This is the true magic of AMVETS, you’re recycling on both ends. You’re recycling your old stuff when you donate it to AMVETS, and recycling someone else’s stuff for them (and the planet) when you buy from AMVETS.

What could be better?

Well, let me tell you what could be better. When you end up recycling your friends’ AMVETS donations.

True story. This has happened to me twice, that I know of.

I picked up a very cool embroidered jean jacket for my daughter when she was two or three. Very cool. It was very European looking. I loved it, and so did my daughter. She wore it a lot. She wore it to preschool, where one day one of the other mom’s said to me, “Where did you get that jacket?”

“Awesome isn’t it? You won’t believe this, but I picked it up at AMVETS for $2!”

Turns out she did believe it. She’d donated it to AMVETS a few months prior. Funny thing is that seeing it on my daughter, she was now regretting getting rid of the one-of-a-kind jacket that her friend had picked up for her while in Europe. (I told you it looked Euro!) I guess I should have offered to take it off my daughter and put it on hers, but I didn’t. Not at that point. My older daughter outgrew it, my younger daughter got big enough to wear it, she then outgrew it, and in the meantime my friend had another little girl. Guess who’s wearing it now?

The other instance involved a book. When my lovely co-blogger Jacquie was pregnant with her first baby I bought her a copy of Anne Lamott’s “Operating Instructions; A Journal of My Son’s First Year.” (I have to admit that I read the first few pages of this book and could not put it down, so read the whole thing before I gave it to her.) It’s a terrific book. One that all new mothers should read.

So years later, while I’m in AMVETS perusing their book section, I see a copy of this book and immediately think of my co-worker who’s pregnant with her first child, a boy. I know she’d appreciate Lamott’s insight, so I grab it off the shelf, check the price ($1.50 -- score!), and head to the check out line.

When I get home I take a closer look at the book (thinking I might possibly re-read it); I come to discover it is the exact book I’d given to Jacquie years ago. How did I know? Well, it had Jacquie’s tell-tale signature in it.

Being someone who's traded books with her for years, I recognized it right away.

Oh man, I was reading that thinking "tell the whole story, Beth". But I have always suspected that you didn't believe me when I told you that I did NOT dontate that book to AmVets, I do NOT give up books. What I do is give AWAY books, to friends who I feel must read them. I am almost positive that I gave that one to Aline, but it could also have been Heather. I loved that book, I still quote the line where she speaks of her infant "raising his ugly, reptilian head"

Oh, I had forgotten that. And of course I believe you!

This fact actually makes the story better. It went from me, to you, to Aline/Heather, back to me, then on to my coworker, Dana. She's since moved to North Carolina, so it may be back at AMVETS right now if she decided not to haul it across the country.

I love both those stories, and the continued story of the second one down here in the comments-basement. It just goes swimming and swimming around in my mind, like a happy smiley fish.

And Mistah's suit may be "tropical white", but it will always be yellow to me.

I donate all my old items to the "Airman's Attic" here on base which is a free store for lower ranks. Basically those ranked below a Staff Sgt. can go and pick up items for free that they might need around the house such as clothes, dishes, toys, etc. Sometimes they even have furniture, but that tends to go quickly.

Oooh - good tip on the AmVets. I've only Goodwilled myself. I always find the best stuff in places that are close to expensive or posh neighborhoods. And you gotta love the kid stuff - I mean - kids only wear things one or two times before they outgrow them, sometimes. That swim cover is adorable.

And I would like to buy Mistah's suit, whether from AmVets or directly, but first I must become taller and thinner and generally cooler. Which I can do, mind you. Depending on how much he wants for the suit.

So, Mistah, how much do you want for the suit? I want to see just how taller and thinner springer kneeblood can become....