Jo and I talked throughout the evening. I had dinner with my family here and then Jo and I decided to take the 7:57 pm train. It was hard to figure out when, exactly, to go. If it was going to be a late call on the election we were going to reevaluate, but by 7 pm the numbers were starting to look pretty good and we decided we needed to just get going. The train platform was filled with people of all ages and sizes, and the train was a blast. I've never seen anything like it - people were shouting out results as calls came in or as they saw results on their phones. I found Jo right away and we chatted all the way down. Jo's amazing. She's 51, incredibly smart and incredibly connected. She's like Forrest Gump - she has taken part in so many important political and historic moments. She was an intern in the white house in the 70s and was in the room when Nixon resigned! She worked for the CIA, has friends in every port. She's going to the inaugural parade.
. 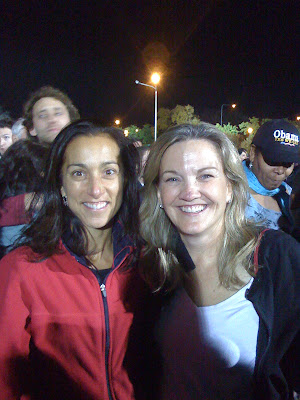 Anyway - we got down there around 8:30 and walked east, to Grant Park. It took about a half hour, it was a gorgeous night and the streets were FILLED with supporters. (It reminded me at so many points of the marathon - just huge throngs of people walking toward the same point, with a shared purpose and goal.) We got to Grant Park and the line for ticketed entrance was like three blocks long. We walked back and back and then looked at eachother and decided we’d never get in if we went that route. So we walked back to the front and totally cut/merged and got right in. Security was tight but not crazy - they checked your license and ticket and looked in any bag you brought. You couldn't bring anything bigger than a purse. Once you got in there was another security checkpoint again where they did a similar screening. It was all very orderly and calm and everyone was well behaved and so UP. Then we were just in! As you approached Grant Park itself what was striking was just the sheer number of people. 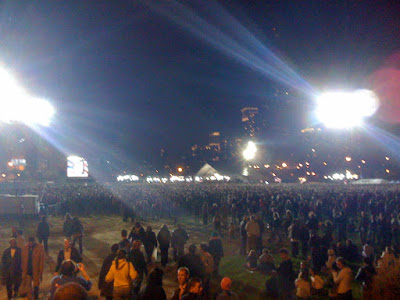 The crowd was so diverse. It was so cool to see thousands and thousands of young people fully engaged. There were tons of older people, too (Jo and I were saying on the train we both felt so old. When we got to the rally she turned to me and said, "ok, I don't feel that old anymore.") I saw several women with babies - they can one day tell them they were there. There were so many teenagers and 20-somethings, so many young black men. It was powerful. There was lots of chanting, lots of screaming, lots of nervous energy.

CNN was playing on the huge jumbo-tron so we got to keep up to date on each state as it was announced. Virginia elicited a huge cheer, then, right before 10 pm, the CNN anchors started to say as soon as the polls closed on the west coast that history might be made, etc. 10 pm hit, on the screen flashed 'Barack Obama elected president' and the crowd just went NUTS. Screaming, cheering, crying. I couldn't stop crying, it was so emotional. There was an older African-American couple to my right and to Jo's left was an African-American woman, about my age, with her teenage son. I loved watching them throughout the night. The emotion was just so palpable and visible, it was fabulous.

They played McCain's gracious speech, the crowd was respectful and silent. I was a little worried he'd get booed or whatnot and when a few people were unruly those around them gave 'em stink eye till they shut up. I was so struck by Sarah Palin's expression: she looked devastated. The guy behind me said, "wow. I guess she thought she'd actually win." After that the CNN coverage stopped. They played one of the Obama campaign videos. Then there were several songs cranked from the speakers (Signed, Sealed, Delivered, some cheesy Americana C&W song, Sweet Home Chicago. I turned to Jo at that point and said, “What’s next? A Hyde Park song?”) Bishop Desmond Tutu led a really moving prayer, then a former marine led the pledge and prefaced it with a talk about what that pledge means and how grateful we are for those who serve in the military. Next this blues belter came out and sang the national anthem (and messed up the words like five times! what the??) The crowd was so ready for the big event, nervous, excited, chanting OBAMA and YES WE CAN over and over. Then, with an introduction of "ladies and gentlemen, the next first family of the united states" - the Obamas walked out. 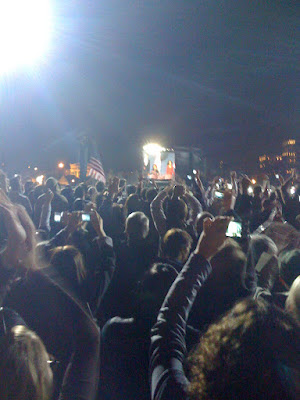 Wow. I just kept saying to Jo, I can't believe he won! I couldn't stop crying, it was so intense and joyful. His speech, as I'm sure you saw, was muted but inspiring. It was magic to hear him speak out there. He had the crowd in the palm of his hand - you could have heard a pin drop - and the energy was electric.

I loved being in that sea of people, all ecstatic, so full of joy and hope. That older couple just beamed, shaking their heads over and over. People were hugging strangers. It was amazing.

It was slooooooooooooooow filing out, but opened up quickly once we got through the bottleneck/entry point. Michigan Avenue was just wild - the street was closed to cars and just filled with people. People were standing on flower planters, on cars, on benches, waving signs, screaming, laughing. As we were walking to the train station I got nervous a few times - it seemed like the crowd's energy was getting wild, then it just got calmer again. I swear, everyone was just mindful of representing well, you know?

It was magical, exhausting, exhilarating and utterly unforgettable.

I love reading this again, Jane. Such a great account of such a great night.

Soooo jealous of you.

I enjoyed every minute of reading this.

And I'm so jealous too.