Labels: by Jacquie
What's that you say, Ellie? You hope that someone has photos of the ice rink in Millennium Park?

As Ellie alluded, our massive group had plans to divide and conquer the windy city that day. Although I wept with angst every time anyone left me, ever, I managed to pull it together enough to capture at least one shot of our smaller group on yon side of the ol' beanie weanie.


Ellie and Jane (I think) carried a combined total of eight pairs of skates during the bean adventure; it wasn’t until much later that someone had the brilliant epiphany that everyone could  technically carry his or her own pair.


We were thankful to have that huge assortment, because the line for skate rental would have required endurance of an hour or longer in the frigid cold.We had ourselves a joyful glimmer, but many among us were grasping it by threads.

We smugly eschewed the rental line and went into a wretched little room equipped with benches to select whichever skates we could find to fit our respective tootsies. Mine were perfect, but Jane sported a size 9 men’s hockey skate on her wee size 7 geisha feet! This room was a cesspool of humanity, mostly inhabited by children bellowing MOM MOM MOM MOM MOM MOM MOM MOM MOM and moms sweetly suggesting that the beckoning children stifle themselves or face their untimely demise.

We finally got everyone into skates and toddling precariously toward the ice, so very eager to test our talent and the ankles that in youth had never let us down. At the exact moment we prepared to set off, the whistle blew, indicating that it was time for the Zamboni.

I swear, it was the same guy who used to torture us at Crystal Rink, in conspiracy with the evil lifeguards who enforced adult swim at Shorehaven. I wished ferverently for a rotten tomato in hand to chuck at the Zambonista’s fool head. It took just under 75 bazillion hours for him to adequately encircle the ice until it sparkled and shone like … um, ice.

And then, we were off: 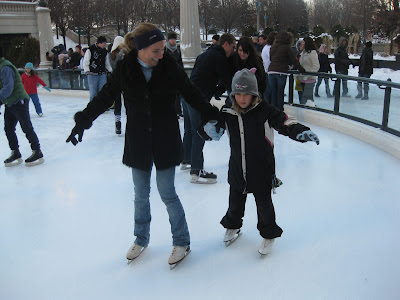 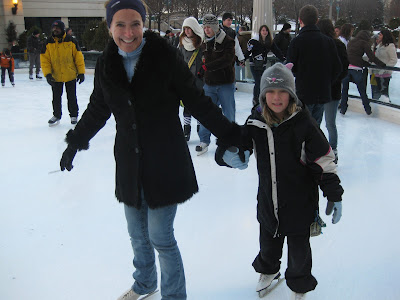 Through it all, my girl Ellie and I wore huge grins, marveling at the muscle memory that escorted us around and around on that little freezing patch of ice in the middle of Chicago. It was so fun! We never left the rink, the two of us, until absolutely everyone else had disappeared back into the pit of despair to de-skate and wait. They were patient, though. One of the greatest things about that week together was how patient everyone was with each other, each person allowing the other to indulge in her own winter midwest adventures without judgment or ire. Ellie and I loved that skating, and we stayed 'til the bitter end and then took a moment to try and capture the happy with a self portrait:

When it was finally time to leave, it was c-c-c-c-coooooold. The smart thing would have been to hightail it over to our warm cars and head back to Jane's warm house. But we were right there in the middle of the city, and Jane, Ellie and I were in agreement that we should make at least a rudimentary attempt to find a nearby pitstop.

Less than two blocks away, there was a bakery, with cocoa and cookies but tragically,  no pie:

I may or may not have fallen UP the stairs in that bakery.

But the best part was that two doors down was the Chicago institution, Miller's Pub, where polite young gentlemen gave us their barstools and Damien gave us big people our drinks: 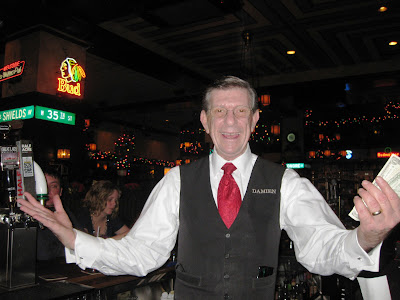 And you people were so small.

I'm betting you never saw the inside of BB&B. I'm also betting it was all Janet's fault.

*your* people were so small. You and the other adults are all mighty, mighty!! ;)

I loved skating with your girl ("You're Freaking Me Out!") and I loved that stop afterward.

I think that was the last time I went ice skating. Except in my imagination, during the Olympics.

I still remember how freezing cold it was that day, and my boots were nice and warm back in Connecticut! the pub was nice and warm though....xoxo mom