And still they come

There was yet another letter in the office mailbox yesterday morning from my pen pal, Greg. 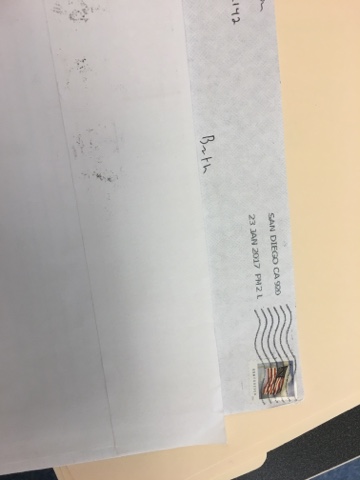 Do you remember him? I've not blogged about him or his letters in more than a year. It looks like the last post about his continuing unsolicited mail was from November of 2015, and the first from January of 2014.

It's kind-of humorous to think back to that first glittery Las Vegas post card in 2014 and remember the worry that it caused. Who sent this to me? How do they know these things about me? Why is my last name not included? And why no signature or return address? It was pretty creepy.

Now it's just normal, and the return address is always included. It vacillates between a San Diego and a New York address. Greg is bi-coastal.

Some envelopes contain a hand-written full page, usually recounting the past at the office complex I work at, the various close-by lunch options, including which were/are his favorites, and a little bit about what he is up to.

Other times it's just a page of paper with a question or two written on the very top. This time, for example, it was "Who are you going for in the Super Bowl?" with both teams listed below with the projected point spreads. Honestly, I didn't even know who was in the Superbowl until I read his 'letter' yesterday. And I can now only remember that New England was one of the two choices. So, I'll go for the other guys. Whoever they are.

But regardless of what's inside, they keep coming. I found 8 from last year in a pile on my desk. There were probably others from earlier in the year that I tossed, like his inquiry for the 2016 Super Bowl. 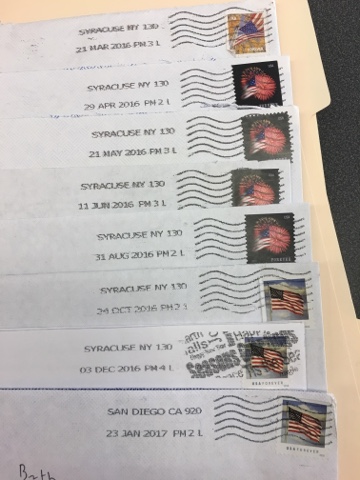 I've never replied to any of his letters, and it has never come up the few times I've seen him in person since. It's just something that is. He writes and sends, I receive and open.

No wait. No July? No November.

so bizarre Beth, make him go away.

what a weirdo. at least he has good taste in women to obsessively pursue! I still don't like it, though.

kick him in the shins!