This is it, kids.

The young and the old, the involved and the indifferent, the interested and the disenfranchised, we’re in this together, this time.

One of the most exciting, enlightening and gratifying parts of today is that my niece, Chapel Hill Girl, is voting. 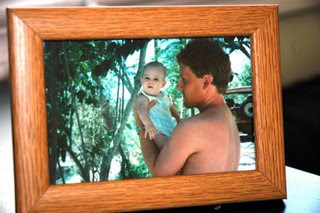 And the great thing – one of the many many great things – about her is that she was an Obama-head from the very start, way back in the field-full-of-democratic-candidates days. Her only disappointment? Her friend Chris, #1 in their high school graduating class, would turn 18 AFTER the election. These kids were bummed out about this like 3 years ago.

Here’s my email to Chapel Hill Girl on Sunday night:
.
So, I'm just so over the moon nervous and excited about Tuesday. I think Chapel Hill is just about the most wonderful and fulfilling place you could be that day.

Last night, we were sitting in our favorite, inimitable Tavern, and we named all the presidents in our lifetimes. The president who will be elected on Tuesday will be #10 for me and for Uncle Bill. Your life, on the other hand, has been so completely overwhelmed with Bushes. With 2 terms of Clinton in there, too, thankfully. But sorry, honey – 2 Bushes out of 3 presidents in your lifetime? We'll change that on Tuesday. We will! I mean, Yes We Can!

Love you. Good luck. Talk to you then. 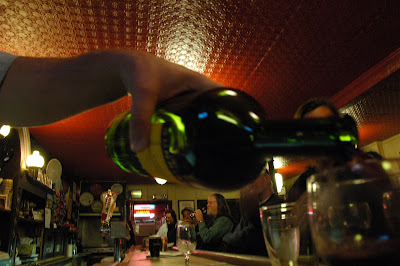 Love that Tavern.
.
And although she seems worlds more mature and wise than I, MartyJoCo has only 1 more president than I do. But the conversation struck a chord with me, and I've been thinking about it ever since.
Here are my presidents, so far: .

Pretty motley a crew, wouldn't you say?
.
It’s interesting to think about, when you’re awake in the night wondering why why why??!!

And for lots of the rest of us, including Jacquie’s boy, it’s about war: 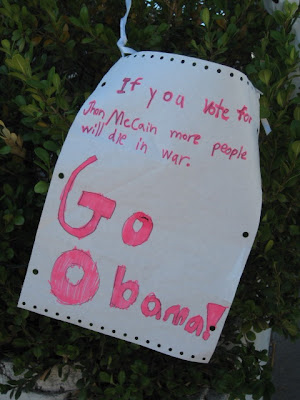 Way to go, buddy. Good luck today. And remember what your mom said yesterday about The Big O. Here's to Optimism. Here's to Obama. 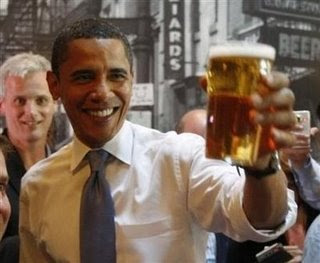 My family moved here when Nixon was president. The first president I remember being aware of was Carter (that National Physical Fitness test, don'tcha know'!)

But mostly, my formative years were the 12 years of Republicans (Reagan, Reagan, Bush). I'm sad to say my opinions aligned themselves Republican in through high school (thank you, college!).

It was thanks to Clinton's election that I saw hope, and decided having kids wouldn't be a terrible thing to do.

I really appreciate the shoutout to Chris. But I would just like to add that not only was he an "Obama Head" from the beginning even though he couldn't vote, he also took a gap year, didn't come to Chapel Hill, but went to Cleveland, Ohio to be a field organizer for the Obama Campaign. He's done more than anyone I know to help Obama win this election and he can't even vote. Talk about an inspiration.

Thanks for chiming in, Chapel Hill Girl. You are *both* my heroes.

Great post, El. And HI, Colleen! Not only have you done so much for our man O, you have done what so many of your extended family near and far have been unable or unwilling to do - sign in to comment! It's a big day indeed.

That line up of presidents is scawey. We need some coler up in that hizouse.

GVI of mom with baby glued to the tube. Reminds me of myself with my nursling of the exact same age on 9/11/01.

I might sound calm, but I'm terrified. Shaking in my boots, my friends. It's going to be a long day.

Love the post, Ellie. I found the left-handed deal fascinating as well. Who knew?

And I agree with Jacquie that it's going to be a long day. I'm already distracted and it's only 9:15 AM. I doubt I'll be getting much work done today.

I loved hearing about your friend, Chris, Colleen. You guys are an inspiration.

Because my youngest is four, this will be her second president (well that holds true for my seven year old as well doesn't it). She is really hoping that Barakoli wins. We even ate some at dinner last night in anticipation of today's election.

I'm so proud and excited to have voted this morning.

I am LOVING today =)

I didn't get to vote this year because my husband didn't pick up my form for an absentee ballot like he was supposed to...but had I voted it would have been for John McCain.

Here is my reason..and we may just have agree to disagree on these reasons..
- He is a former POW who knows the horrors of war. He wants our troops to come home as soon as possible, but would like them to come home with a solid victory in Iraq. The surge in Iraq worked and pulling the troops out now would allow for chaos to come back into the region.
- He really does work with the democratic party. He has stuck his neck out over the aisle many times (against the wishes of the Republicans) many times in order to get real progress made in the Senate.
- He always has had his country as his top priority. Between his service in the military and his service in the Senate he has always done what he thought was right for the country.

This being said, I don't agree with all his views, but his views more closely match mine that Obamas. Either way, I hope this election is fair and that the voice of all Americans are heard loud and clear today.

I'll chime in on the left-handed candidates phenomenon, being the token Corey lefty.

John McCain is not a natural lefty; he assumed use of his left hand after his trials in the war rendered his right hand unable to write.

Other lefty US presidents:

Incidentially, that makes 50% of our US presidential make-up were lefties since the end of World War II.

And there you have it.

Good luck today all. I'm camped on my couch today watching the fun.

Wow, it's as if I blinked, and we were over the top. Today is a whole new day, one that so many never thought would or could come. Tears of joy and sorrow mixed with pride and hope.

It's been great sharing this ride with all of you. Raise your glass. We did it!

Wish you could have been here to see it, Tim Russert.

Congrats on your win. Now you go celebrate while I sit here and watch the movers pack my house up. See I am making good on my threat to leave the states if the country goes into a tailspin (not withstanding the fact that I would be going if John McCain was elected as well)!