On the banks of the Mighty Thames River sits a bucolic spot . . . 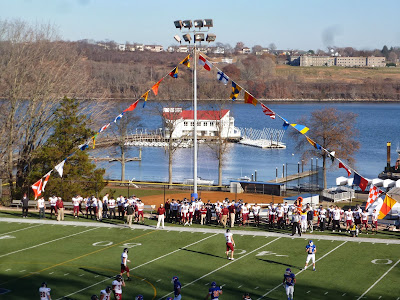 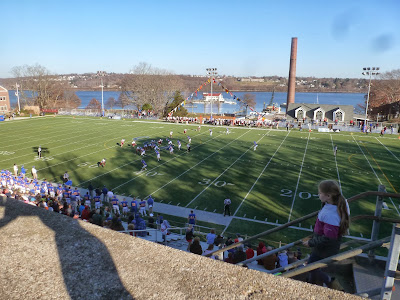 And at that beautiful campus-by-the-river, the cadets team up to play football. 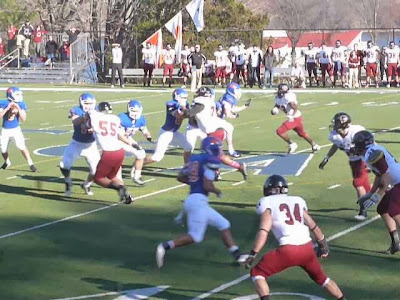 This year's final game was against the MIT -- you guessed it -- Engineers. 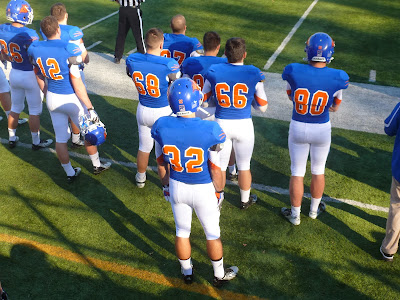 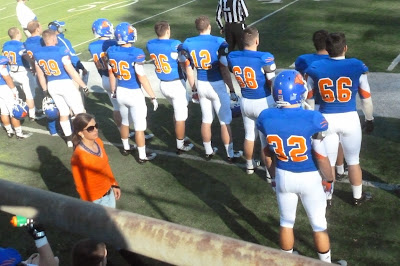 Hey wait a second, that's not a player!

But best of all, the Coast Guard Academy features Objee the Bear. 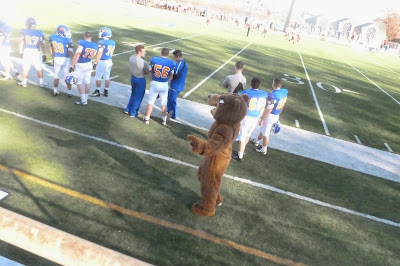 Here's the story of Objee the Bear:

The legacy of one of the most dramatic rescues in Coast Guard history is a constant reminder to Cadets of the importance of fitness, teamwork and perseverance. The long time Academy mascot, the Bear, was chosen to honor the renowned Coast Guard Cutter of the same name. 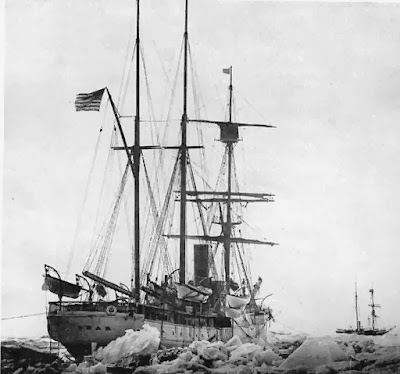 In 1897, the Revenue Cutter Bear embarked upon one of her greatest missions. After a busy summer she was heading south for the winter, and put into Seattle along the way. There she was met with the news that 8 whaling ships with 265 men aboard were trapped in the ice off Point Barrow, the northern point of Alaska. President McKinley personally asked if Bear would try a rescue dash, although no vessel had ever sailed north at that time of year. Bear accepted the challenge, and sailed north on 27 November, with a volunteer crew. She drove northward into the cold, stormy seas for many days, finally grinding to a halt in the ice at Cape Vancouver, Nelson Island. She was still 1200 miles from the whalers. Three of her officers, Lieutenants Jarvis and Bertholf and Surgeon Call voluntarily left the Bear to trek through across the ice to the whalers. Their remarkable journey took 120 days, averaging 10 miles a day. For 800 miles they drove a herd of reindeer ahead of them, to feed the trapped men. They were just in time. When the rescue party arrived with the herd of reindeer, the whalers had run out of food and were reduced to eating their boots.

Eating their boots! 800 miles with a herd of reindeer! Dramatic indeed. 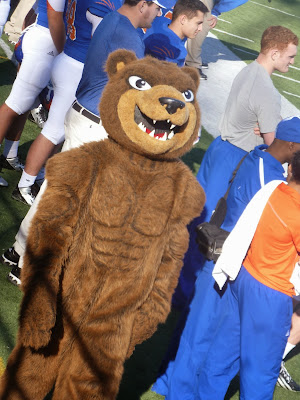 And the name Objee, you ask?

From Objee - the name of the Coast Guard bear. As recently as 1984, a live bear (Objee) was kept on the Academy grounds and occasionally roamed the barracks. A bit of history: By 1926, the bear had been the Academy's mascot for sometime in honor of the Cutter Bear, which had served in the Arctic Zone for years. However, it was during this year that a Cadet by the name of Steven Evans returned from leave with a live bear cub. He somehow talked the Superintendent, Captain Hinckley, into allowing the bear to stay at the Academy. The bear was named Objee, which was short for "objectionable presence." He had many homes throughout his tenure at the Academy, but the one he spent the most time in, and his last home was the old Academy observatory next to Billard Hall. Although he did not sleep in Chase Hall, Objee was often brought into the barracks and turned loose. He showered in the cadet showers, and was even allowed to eat in the wardroom from time to time. Cadet Objee was particularly fond of visiting cadets during study hour. Apparently he lived up to his name because finally in 1984 after 27 live Objees, the tradition was ended.

I hardly think a bear who showers in the barracks can be classified as an Objectionable Presence. 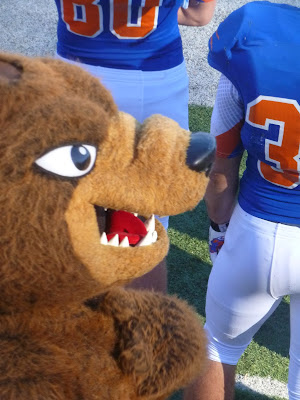 I mean, really. Just look at this guy. 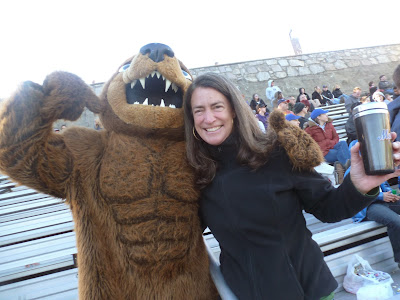 There is not an objectionable bone in his adorable little ursine body. 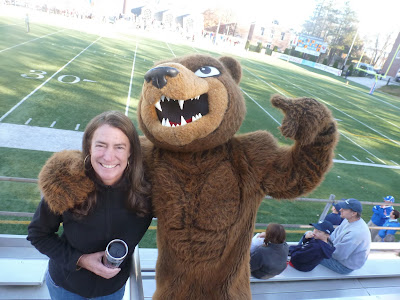 Love it Ellie, and love the history lesson..Objee.....
love, mom

This is awesome. I had *no* idea, about ANY of it. What fun. And really, what a crazy piece of history. An 800-mile walk?! Incredible.

Okay, and you and Objee? That first photo is fantastic! Seriously, you and your perfect hair and smile, and um, coffee, and he with his amazing chest and roar?! Perfection.

fascinating! who knew? not me. But I'll tell you two things:

2) My favorite part of Objee is his sculpted abs.

I know Jacquie; I love his abs.

And Beth, he sees out through the screen that's in his mouth, so he wasn't roaring so much as looking straight into the camera. Probably smiling too: he didn't strike me as the smartest bulb on the ol' tree. I said, "Thank you, Objee!" after the photo and he replied, "Yup."

there were 31 objeee bears at the academy (not 27)