Tinkerbell is all grown up

Two Sunday evenings a month my youngest daughter and I are together alone. I pick her up from her dad's house at 4 pm, then the rest of the evening it's just her and me.

I love these Sundays. She gets extra attention, and I get extra 4-year-love. It's easy and comfortable and nice way to wind down the weekend.

Plus, there are invariably some gems that come out that girl's mouth. Some comments that make me laugh out loud and wish I was one of those organized moms that wrote down all of these snippets  for prosperity's sake.

If you've not met her, my preschooler is pretty spunky. She is not shy, or cautious, and definitely tells you what she thinks, as do most 4 year olds, I think.

Tonight she saw her Tinkerbell sippy cup on the counter next to the sink and asked if she could drink the juice in it.

She could not, I replied.

Because it was not juice. (It might have been Fireball left over from Friday night's Slightly Stoopid concert pre-party, or it might not have been. But regardless, the contents of the sippy cup were not for her consumption.) 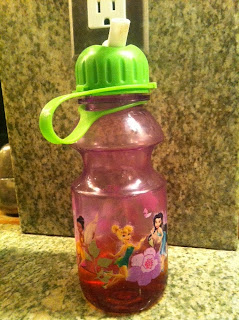 "But it's my sippy cup," she replied to my denial of her request.

"Well, it's my juice, I told her and then went on to do that totally annoying parental move of shoving her financial dependence in her face: "I actually bought it, so it's not solely yours, anyway," I replied. But then remembered that she lifted it from the local Target. It was concealed in the upper basket section when she was about two, it was totally innocent and unplanned, but the bottom line is that it arrived at our house unpaid for.

I made them mistake of thinking out loud on this one, and my girl ran with it.

Nice logic, but no.

And the ease to which you just ran with that theft angle? Slightly scary.

Later on, after we read bedtime stories, one of which was an illustrated book of the Twelve Days of Christmas, which I of course sang to her, she told me, "You're a better singer than Anneke." (Her older sister.)

"Yeah," she replied, the continued with, "Do you think you'll be a singer when you turn 21?"

Don't you just love her?

And don't you just love the fact that this short post about my preschooler's overnight last night was full of sex theft, drugs, and rock 'n roll?

I'm clearly doing this parenting thing right.
at 8:10 AM

Oh Beth, I have a *much* better photo of the sippy cup that you could have used for this post. hee hee. Thanks for sharing your juice, it was delicious.

Love that little pip of yours, she's aces.

You have described her strength, intelligence and determination to a tee! She is a corker.
And I love you both.
Love, Mom/Nonnie

I love her too, even though I have never, gulp, met her. I know I know: I suck.

We have lots of mutual friends, though, and everyone speaks *very* highly of her.

I love you, and I love juice.

Ha, Jacquie, I do want to see those better photos!

And, Ellie, sheez, that's true isn't it? I can't believe you've never met her! We'll have to make it happen. Best scenario, you and Mistah get in the Subaru and start driving. West.

And Breanne, thank you for not judging ;)

I am *not* driving West in my Subaru. Westy could probably make it.