We had the world’s most ideal cooler. It was a Coleman Oscar, and it was the very manifestation of Cooler Perfection. Oscars have little round calendars on their bottoms, declaring when they were made, and our cooler was brought forth into this world in something like 1982. It was Mistah Schlecka’s cooler when we met, but I adopted it as my own.

Besides being the, well, the perfect beach cooler, we’d bring it on vacation with us when we had real jobs and flew places. We took it to St. John – where my sister Julie lived – many times. Groceries could be exorbitantly priced there, so we’d pack the Oscar up with freezer packs and frozen steaks and chicken, wrap the whole thing up in packing tape, check it as luggage, and put the still frozen stuff in the freezer when we arrived.

In 2001 we quit our jobs and took off in our Westy, and Oscar was our faithful companion.

But then in 2005, while visiting us in our Westy in the Florida Keys, our so-called friend Matt dropped poor ol’ Oscar and the handle broke off.

It was sad, but not tragic. We just filled him up with beer and ice and carried him, under one arm, to the beach. Well, Mistah did. He’s got wonderful grace and coordination and can easily jump on his bike with a cooler full of beer under his arm.

After a year or so of good life and devoted service as a no-handled cooler, we realized that the bottom of the Oscar had cracked, and was leaking. I’m as sentimental as the next guy – and I love this cooler – but a cooler that leaks is no longer a cooler, but a plant holder.

No worries. We’ll put him to rest and get ourselves another Oscar.

We went to Target. We went to Benny’s in New London. We went to the dreaded Wals-Market. And the realization finally dawned on us: they don’t make Coleman Oscars anymore.

But hey, it’s 2006. Why was ebay invented except to help people like us get exactly what we need to restore our happiness?

We found Coleman Oscars on ebay, all right. The cheapest one was going for something like $35. Plus $14 for shipping. Suddenly we’re talking about a $50 cooler. Which is over 20 years old.

Despondent, we realized we were going to have to – gulp – buy a Playmate.

We told our friend Mark – who is actually a Playmate man himself, poor misguided soul – our tale of woe and he said, “Oh, didn’t I tell you? Bob’s got an Oscar in his basement he never uses. He said you could have it.”

We went to Milford for the hand-off. 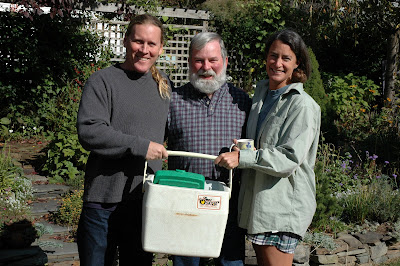 (And while we couldn’t actually saint our friend Bobby, we could at least give him a 12-pack of Harpoon).

That is, until 2 years later. We drove to Alpine from Fort Davis, Texas, a couple months ago, for a typical Alpine day of errands (including rewarding ourselves on their successful completion with pints of Shiner Bock at Harry’s Tenaja, but that’s another story for another day.)

Our first stop in Alpine was always the thrift store right when you get into town. It’s a pretty good thrift store: it enabled us to successfully stock our cabinet with a motley collection of wine glasses over the course of our 4 months in Fort Davis.

I walked into the Big Bend Thrift Store and saw it: 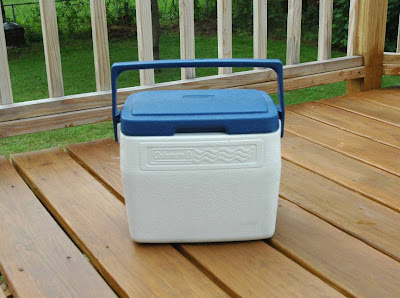 And for $2.50, I grabbed it. A perfect Oscar set! Mistah doesn’t think I should actually call the little guy (a young ‘un, born 12/1996) an Oscar because the cooler doesn’t say Oscar, just Coleman. But you know what? He can just try to stop me.

Our lives were now fully complete. I mean, we’ve just about attained Nirvana at this point. A perfect replacement Oscar, plus this little six-pack (i.e. short stay at the beach) version? What could possibly be better?

What could be better is Bill went to his Mumsie’s neighbor’s pre-yard-sale sale last week. And guess what he saw? 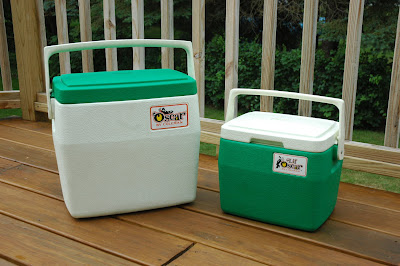 For the combined total price of $3.

Leo Tolstoy famously wrote, “Happy families are all alike; every unhappy family is unhappy in its own way.”

And this, my friends, is a Happy Coleman Family: 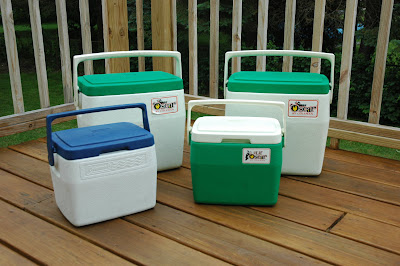 I can hear the little green one saying "Psst. You're adopted" to the little blue one...

I know! Poor little guy. I just keep telling him he's beautiful, even if he IS blue...

I love this! What a happy little family unit! Let your freak flag fly, Little Blue (are you sure she's a boy?)

Super thirsty! And you know what, Ellie? I'm currently using only a cooler, no fridge in my new house. Sadly, it's not an Oscar, but you can bet I'm going to look for a born-on date on the bottom when I get home. Just in case...

Oh. That was a rhetorical question, wasn't it?

I have an old Oscar myself. Why do they always stop making the best things?

This is so great, no wonder I love you. However, now I am sad about my little old cooler: not named, but loved. We'll call him Beigeboy. I don't know if he was an Oscar, but he was the same shape, and I think a Coleman. Obviously, he was beige, and his lid was maroon-ish. He went camping with young Abram & me on all the trips: Macedonia Brook, the Green & White Mountains, and best of all, Fundy National Park NB, Bear Creek NS, and beautiful Prince Edward Island. Then, in a very exciting turn or events, after serving as the Mom & Boy Camping Trip Food Box for several lovely years, Beigeboy made the band! Yes, tall and narrow enough to fit ever so nicely between the two front seats of the Dodge Van, like no Playmate has ever even dreamed of, and a flat top to boot. I think that's when he developed a drinking problem. No yogurt or cheese or milk... just 12 icy cans of St. Louis' finest. The beautiful design meant no fumbling around for the Playmate push button latch (why is it always on the other/wrong side?), just flip the handle and voila, there you go, here's your Bud! So, he saw the country and lots of cool bar dressing rooms, I'm sure, for several good years; rocked out from here to the Mississippi and then some. I don't know where he is now. Maybe down cellar? I can't think where, and if he was there, we would be using him... I think the non-pack rat in the family threw him away when he eventually (probably) broke, but I can't really be sure. After all, it's 2000 something, and you can't really expect a hard-living cooler to keep going forever, can you? But your post reminded me that he was a loyal friend for lots of years and good ol' Beigeboy is still remembered ever so fondly. I think I'll go look for pictures!

Well, hey there, dutchtav! So nice to hear from you, MJoCo! LOVE the Beigeboy story. And knowing you guys, he still *IS* in your cellar, and you'll sell him on ebay to some guy in Japan for $400...

Guess what? When Mr. GuitarGuy read my comment, he said, "It's down at the studio!" So, Beigeboy joined the band for life, and left me with just Playmates and big old huge chest cooler thingies. Glad he made it big.
p.s., blame 2 early wines with Jennie last night, but it's Bear River, Nova Scotia, not Bear Creek. The Switzerland of Nova Scotia. Go there if you get a chance.

Hmmmm. Not sure Mr. GuitarGuy was invited to permanently steal your cooler, but who am I to say? I guess the life of a rock 'n roll star -- or at least carrying beers for them -- is pretty glamorous.


Bear River, Bear Creek. Sounds lovely, but we almost always point our westy south when we travel. I'm scared of all that... North, up north.

Do you happen to have a spare big boy Oscar lid? A we have our Oscar...lidless...

Not able to find one anywhere!!

Please help if you can