Those of you un fortunate enough to be my facebook friends already know about the big blue bag that I bought for the trip to Italy. It is enormously massive, and contains the most unexpected backpack straps  that a soul could imagine. 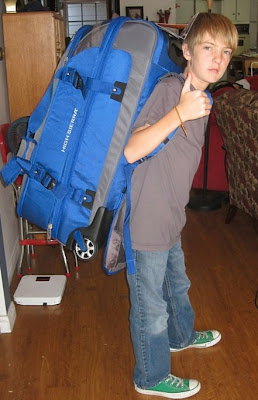 It was a long trip, I needed a lot of stuff. The bag had rugged wheels so that I would be able to roll it wherever I needed to go, despite its weight. My travel plans were easy: the shared ride from airport to hotel, a train from Reggio to Rome, a cab from train to hotel, and a car from hotel to airport. I  was all set.

As I mentioned on Monday, the shared ride fell through and I learned a few things over the course of our navigation to the hotel via bus, train, and cab.

Fortunately, I have two hands. Unfortunately, my carryon rollerbag took up one of them.

Fortunately, there were elevators in the train station to get us from one track to another. Unfortunately, four people with 8 bags take up those elevators completely, and when those people keep missing trains and hogging the elevators, the locals - and the weary travelers - begin to get annoyed.

Fortunately, we eventually found the right track at the right time. Unfortunately, unlike most trains I've ever been on, there are narrow, steep steps to conquer on Italian trains.

Etc, etc, etc, ad nauseum. You get the point. We relied on the kindness of strangers, and eventually made it to our hotel.

So almost from the start, there was a part of me that began to fret about how I was going to get myself to Rome without travelmates. Turns out the itinerary I had planned included a change of trains in Bologna, which had struck me as no big whoop from my comfy desk in San Diego, but was now a wee bit troubling. The more stuff I accumulated, 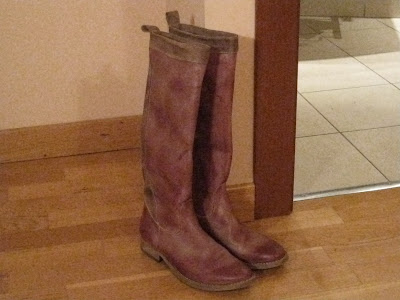 the more that worry nagged, at least when I had the time to let it cross my mind.


Anyway, to make a short story excruciatingly long, I tried to hook up with a few folks who were also headed to Rome, hoping that the buddy system would save my sorry arse, but nothing was quite working out in a way that would be helpful. To me. And then on the very last day I ditched my rolly carryon, bought a backpack, took another look, and discovered that there was one train, leaving early in the morning, that would get me all the way to Rome without changes. It was a high speed number. And there were only first class tickets available.

And that is how I found myself lounging in first class on a high speed train, watching the Italian countryside fly by my window. A guy brought me cafe and chocolate at regular intervals. At one point he asked me: "snack?" I said si, por favore. He asked "sweet?" I said no, grazie. He gave me a bag of bugles. I swear to God. I miss that guy. 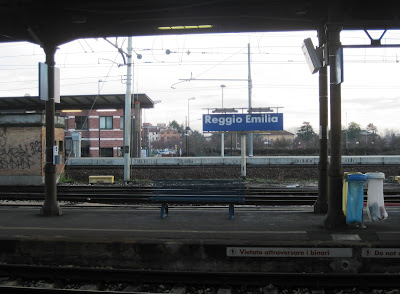 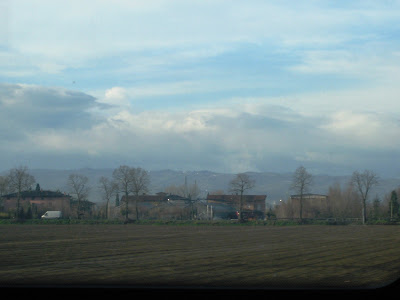 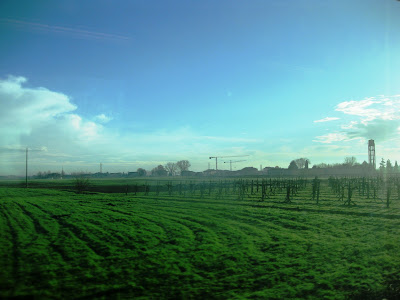 And then just like that, I arrived in Roma! I got to the hotel (via taxi, no problem), and gracefully gratefully dumped Big Blue into a room with this view. 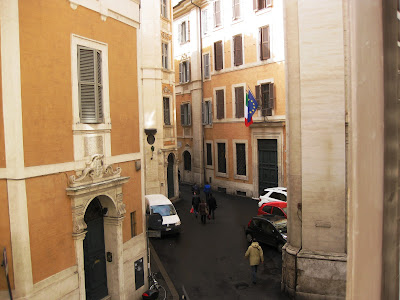 I resisted my natural inclination to move, trying to be more accepting and zen like the buddha and less - you know - American about everything. Plus, I knew mom would be there soon, and she'd do it.

A few short hours and one major rainstorm later, there she was! 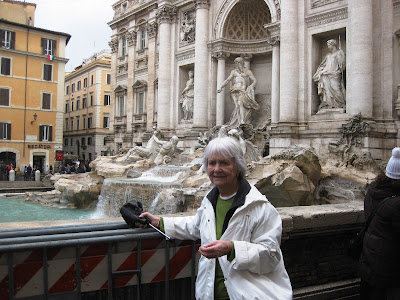 I guess it stopped raining somewhere along the way, doesn't mom look great for having just flown all night and then lugging her bags through the rain for a mile? This, the Trevi Fountain, was close to home, and we made a quick stop to toss in coins, thus ensuring our return to Roma. Then we dropped off mom's stuff, made arrangements to have our room changed the next day (thanks, mom!), and we set out to get the lay of the land.

That first day, I was a total badass with the map, navigating the trek to and from Termini station with ease. Then we had a drink(s) before dinner, and a bottle of wine with dinner, and then we decided to check out the Trevi Fountain again since it was right there in the 'hood and we hadn't had a proper photo op. It soon became clear that my mad map skillz are null when faced with Italian wine, and we walked around and around and around, getting helpful advice and directions from friendly passers by. That's when we heard the directions that became our mantra for the weekend: "Cosi, Cosi, Cosi" (with a heavy Italian accent and aggressive hand gesturing)

But we found it! 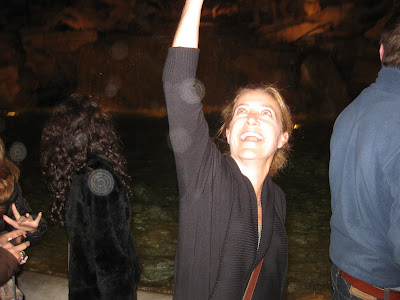 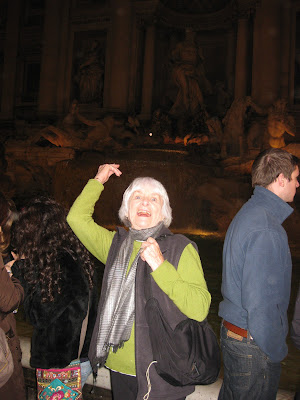 The next morning, I lay in bed listening to the sounds of the street, cold and certain that we'd be facing more rain. It wasn't ideal, but it would be allright. Mom and I are both troopers, it would just require the proper attitude and fortitude.

Can you imagine our surprise and delight to emerge onto the terrace and find this? 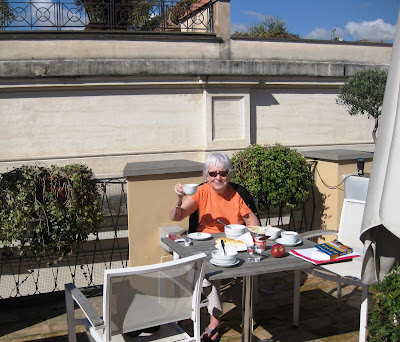 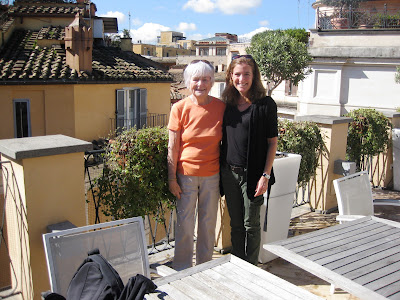 Oh, the joy. Rapture! It was a stunningly beautiful day, and we were treated to similar weather for the duration of our Roman holiday, with the exception of one downpour, for which we had ample notice in the form of ominous and foreboding skies, and plenty of time to get ourselves back to the lovely piazza de pietra before it hit.

That was a great day. They were all great, we just kept doing all the right things and we were so happy to be together in that stunning city. We decided to get ourselves on one of those hop on/hop off, open air buses to get our bearings and have a look at the city. The desk manager at the hotel, Emmanuel, pointed us in the direction of his namesake's monument, where we'd find all manner of buses to choose from.

We selected our bus, and commenced with the grinning. 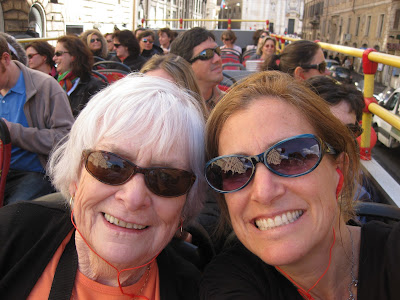 We loved that bus. Our tickets were good for 24 hours, but we used them for 48. It was a great way to get from place to place, and also a great resource for learning about the city. Every  time we looped around, we saw or heard something new. So there we'd sit, soaking up the rays and willing the teeny cars and pedestrians to move swiftly so we could avoid being open air witnesses to Italian carnage. But mostly we just feasted our eyes on the wonder and awe inspiring sights that met us around every corner. 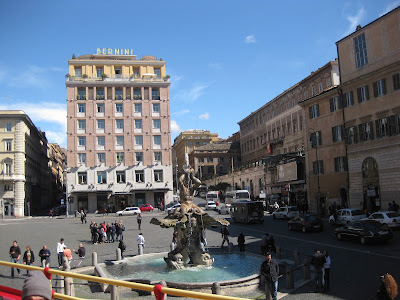 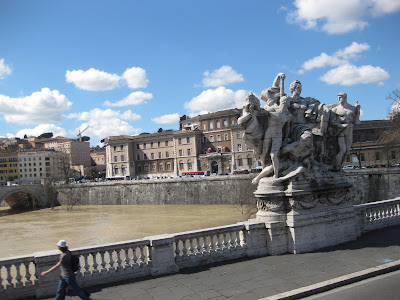 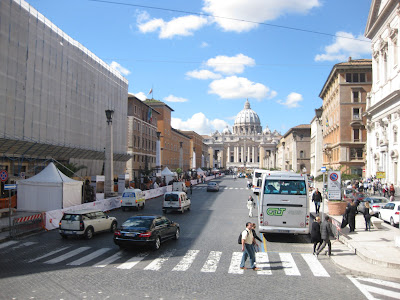 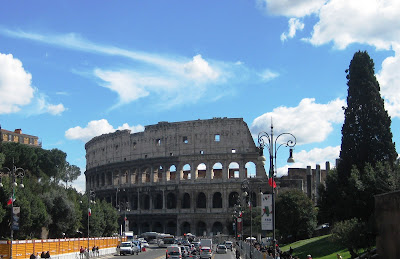 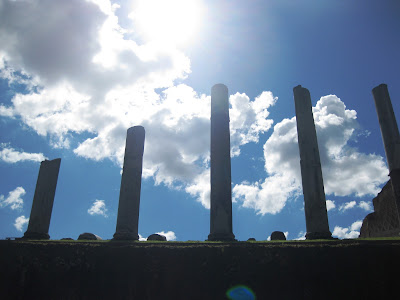 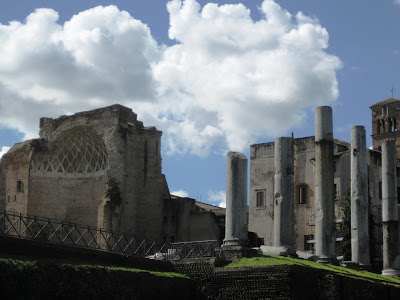 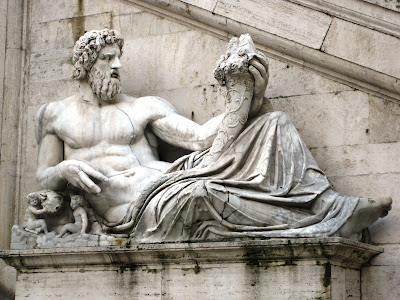 We disembarked a few times, certainly for lunch, also to cruise around the Colosseum area. I think we spotted Victor from the Colosseum and walked home from there. 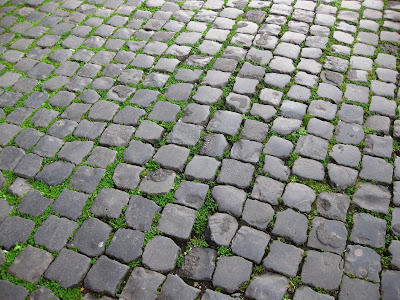 That night, we treated ourselves to a concert of opera arias. It was lovely and moving, we both felt and missed Dad poignantly during the pieces from La Traviata.  We sprung for priority seating, and ended up in the first row. Naturally, I asked the guy next to us to take our photo. He was a sport, scrambling over pews of the ancient baroque church to get just the right angle. Then we got to talking, and he showed us his photos from the private tour he and his friend had enjoyed that day. At the Vatican. His friend, who we called Sir Phillip due to his having been knighted and all. We advised them on what gifts to bring home for their wives. I suggested boots.

pretending to be in Italy said...

Ahhhhh...nice way to start my day. I'll pretend I'm not starting it in Central PA after an overnight snowfall.
Thanks.

Oh, Jacquie, I love this. There is so much love and joy here. And old buildings.

I *love* both your and Mom's jaunty form throwing lira, er, euros into the Trevi Fountain.

I love the countryside and bugles (really, I love bugles. Did you put one on the tip of each finger?) and your terrace and your piazza and your bus. And I'm certainly glad you avoided being open air witnesses to Italian carnage.

I get teary just reading about listening to La Traviata.

And finally, could Sir Philip not get you two a private tour in the Vatican? I mean, sheesh, what's the use of being a Sir?

What a great travelogue of Rome, Jacq! Love it. You & Mom are so adorable! xoxo

Ah! So perfect. (At least one you got to Roma with your bags intact.) Ahd what fantastic weather!

Fountains, and ruins, and operas, and wine, and Victor, and that great outside breakfast/coktail spot. Bravo!

I'm fully expecting the photos from your private tour at the Vatican in the next post. Sir Phillip's friends owe you for giving them your excellent wife-gift advice!

And, I agree with MB, you two are adorable!

OMG -- I have had typos in every comment this week.

We thought the olive oil tasting in our piazza was a wine tasting - imagine our disappointment.... mom

Fabulous post, Jackie
Fabulous look at one of the world's most fabulous places.
Love, Pat

What this educator noticed was the Reggio Emilio sign! Early Childhood specialists study the work done at Reggio and model American nursery schools and kindergartens after it!

See what I mean?

"The Reggio Emilia Approach is an educational philosophy focused on preschool and primary education. It was started by Loris Malaguzzi and the parents of the villages around Reggio Emilia in Italy after World War II. The destruction from the war, parents believed, necessitated a new, quick approach to teaching their children. They felt that it is in the early years of development that children form who they are as individuals. This led to creation of a program based on the principles of respect, responsibility, and community through exploration and discovery in a supportive and enriching environment based on the interests of the children through a self-guided curriculum."

loved this post, Jacquie! a little behind on my blog-reading, obvi, but it's my dream to someday take MY mom to Roma. thanks for the further inspiration! xoxo

Unmitigated - that's why I was there! My post from Monday the 28th had some stuff from Reggio.

Sarah - you should. You really, really should. In fact, we should get a whole Flatley mom/daughter delegation!