Throwback thursday: I don't know if this is even working

Labels: by Jacquie
I’m really not a big sports fan. I do love the venues – going to the ballpark or stadium is one of my favorite ways to spend a summer evening or an autumn Sunday. I get all caught up in the moment, staunchly defensive of my hometown boys. I like to be in my seat before the National Anthem, so I can stand and sing my heart out and be prepped and ready for that first play. And I do not leave early.

But I’m really not a big sports fan. Baseball season is a great time for me to catch up on reading and computer prowling, because the game is always on and it just does not hold my attention for too long. Watching football is okay at a bar, or keeping a close eye on our bolts during their weekly game, but I seriously do not understand how people like my husband spend their entire weekends – from Thursday to Monday night - watching game after game after game. He is… um, how can I put this delicately... fucking scary to be around during a Charger game. When the kids were younger and less impressionable, I used to take flight and enjoy afternoon matinees during football season. But now I feel it is my duty to protect them from the language, the blood pressure, the fury that transforms their mellow old dad into a big, throbbing tendon.

There is, however, the odd occasion when the kids and I get swept away into the heat of the moment for a big game. Saturday night was one of those moments. The Chargers had a laughable season, it was painful to watch, painful to live with, just painful. But somehow, somehow by the calculations of those mysterious sports-nerd statisticians in the ethos, we had a chance at the playoffs on Saturday night. It was a big night.

We live within walking distance of the stadium, so game days are always festive in our ‘hood. Traffic’s a bitch and it can get noisy, but the fighter jet flyovers and fireworks and fans make it a pretty fun environment. For Saturday’s game, we walked over to our great friends and neighbors’ house to watch together.

Before leaving, we secured our beer money in our own driveway: 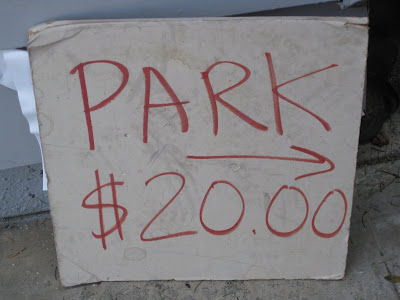 That game was unbelievable. I might have gained empathetic insight into Bill’s general state of murderous angst during Charger games, but I kept myself nicely medicated with margaritas and beer. I was the resident optimist, those diehard fans have become so accustomed to letdown that they couldn’t help but flirt with the self soothing rationalization that “at least we made it this far”.

And my happy, happy Bill was wearing his jersey! 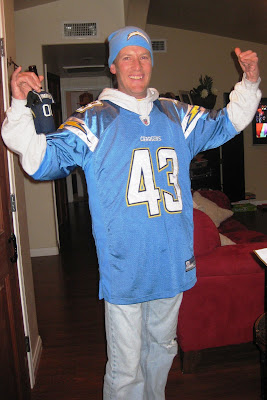 As soon as the victory was secured, the kids got down to business 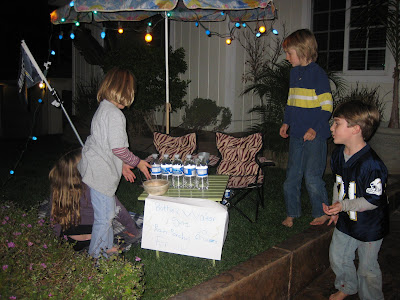 The boys offered free entertainment while the girls handled sales 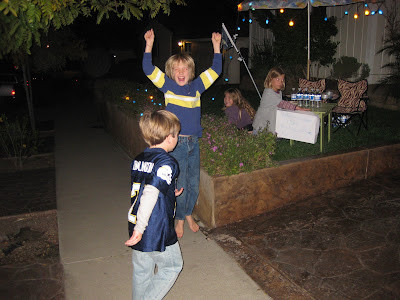 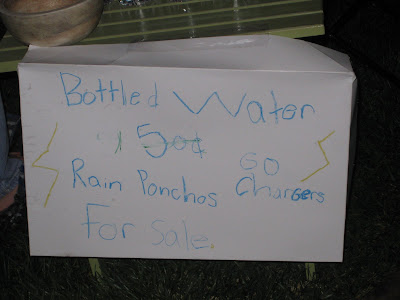 Rain had threatened earlier, but now it was all about the water. You see, we are walking distance from the stadium, but the walk home is one bitch of an uphill trek. So if you build it, 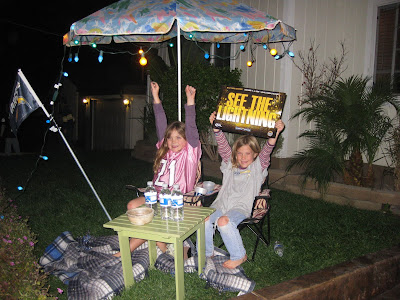 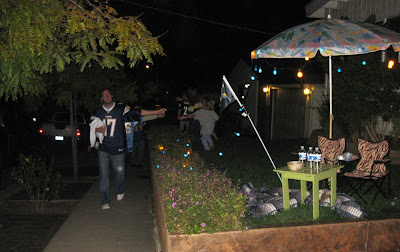 And after doling out $9 for beers and then screaming their heads off into overtime and the lovefest that followed, the peeps were parched. 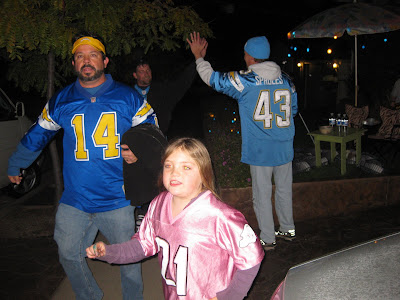 Even the neighborhood’s newest baby bolt was all fired up 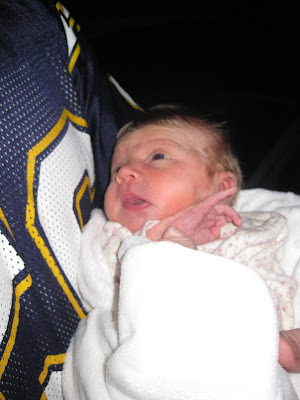 What a night. What a haul! 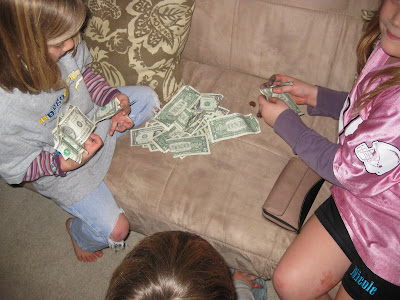 This is how to have a fan stand

Pickles and Dimes said...
YAY Chargers! I wanted them to win but when I saw the Colts were ahead, I decided I was jinxing them so I changed the channel.

NucMEd is Hot said...
Being from KC I have to say that while I don't share your love for the Chargers, I hate Peyton Manning even more. Plus "that little guy" is a K-State grad and I love all things Big 12!

Me, You, or Ellie said...
Incredible game! I mean, I'm not sure we (Chargers) deserved to win, and the calls seemed unbelievingly stacked in our favor in OT, but hey, we'll take it.

I'm glad you guys had so much fun. I was actually thinking about how out of her mind Desiree must be during the end of that game. You, however, got to witness it.

Congrats on your team's success. I couldn't give a rat's ass about football, but the peeps, they love it. Including all 4 older members of my immediate family. And your man is scary during football season. And, um, baseball season. Good thing he's not a hockey fan.....

Kathi D said...
I would have killed for a location like that as a kid. We had a couple of lemonade stands, failing to grasp that they only work if there are actual pedestrians strolling by.
January 5, 2009 at 2:31 PM

Me, You, or Ellie said...
actual pedestrians. LOL, I love that comment.

Trannyhead said...
Man - you should TOTALLY let him ruin their impressionable minds and go to a matinee! I'd totally approve.

It's working! Great, appropriate throwback post! I'll be rooting for your team on Sunday. xoxo

Nice work getting this posted, and can not belive that they pulled the same shit out again this year!

I tunred on the TV to see the very last play of last week's game. The only play I've seen all season. I almost got caught up in it, although I was no where near throbbing tendon status, lol. And like Ellie I *will* be watching on Sunday. Call me fair weather if you must ;)

Actually, Beth, that was MB who will be rooting for your team on Sunday. Don't get me wrong, I *will* be rooting for the Chardres, but only inside, where it counts, as opposed to, like, in front of a TV

Hope this flashback brings on a WIN this weekend...GO CHARGERS!