If you're me, this is the best kind of text you can receive:

"Kat and I are looking for a deck for vino-drinking. You around?"

What are two moms to do? Sit there and watch the toddlers sleep? No. Emphatically no. Instead they texted their friend Ellie to see what was what. Their friend Ellie's response?:

They showed up with prosecco, Mistah hit a towering blast during which the cork hit a hanging branch but was still ruled a home run* . . . 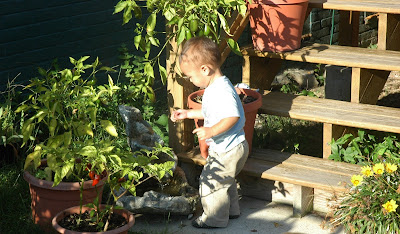 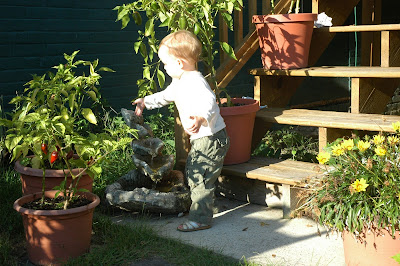 . . . and the Girl.
They look sort of alike in their midgetness and their baldness, don't they? They're not at all alike, though. They're eight months apart which is like night and day when you're two (she) and 16 months (he). (Really, I should write a baby book). 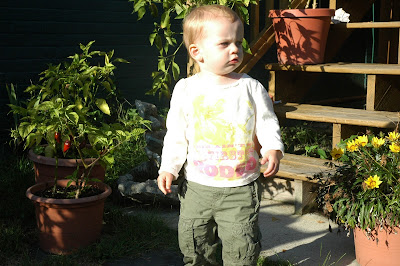 People. Trust me. If you see this face on young Ms. G? Run. 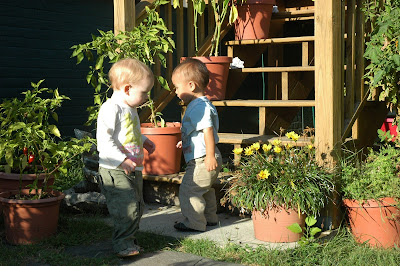 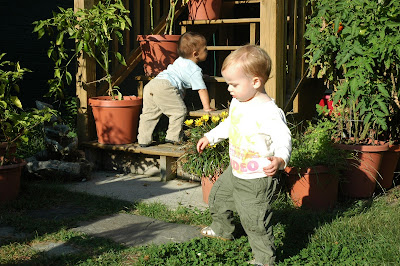 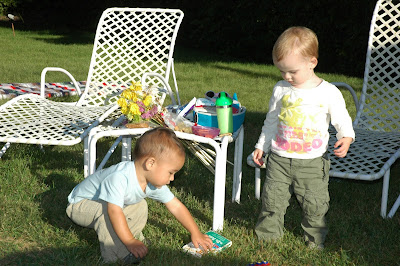 They did eventually find eachother, though, and did actually put their wee peanut-brains together to conspire against the grown-ups* every chance they could.

(*I really really love being called a grown-up around young children and use it, boastfully, whenever I can.) 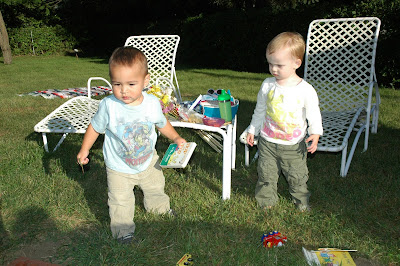 Actually, they totally listened to the grown-ups.*

And then Mistah went to Sam's and came back with pretzel rods. Genius. Who doesn't love a pretzel rod? They're delicious, they go great with wine, they're perfect for dipping into homemade garden-grown-jalapeño-infused hummus, you can pretend you're smoking a cigar, and tiny kids can actually grab ahold of them, and suck the salt right of of them.

And, mothers and daughters can enjoy them together: 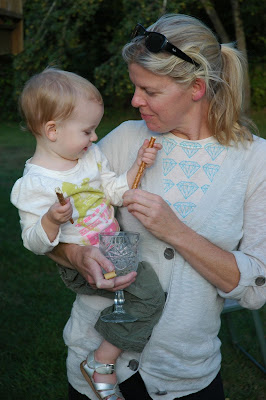 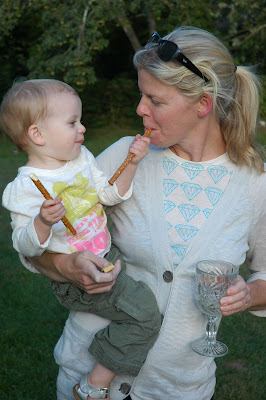 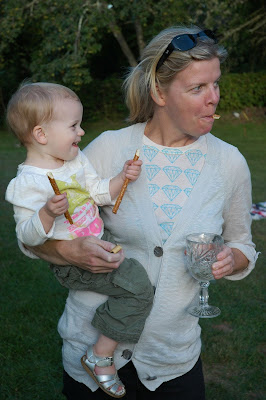 And then? Well, then the Little Red Car showed up.

And when you've got a couple of wee ones between the ages of 1 and 2, well, there simply is no back yard, there is no mexican blankie, there is no bucket of goldfish or drinkie-cup of skim milk* that can compete with The Little Red Car.

(*when the kids finish their mother-brought-whole-milk we always have backup. And the kids are so thin!) 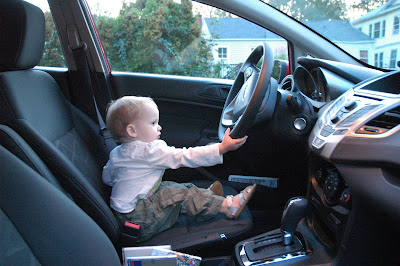 Ms. G started driving . . . but wait, you know what? Let's just roll the tape from the dialogue we secretly recorded.* 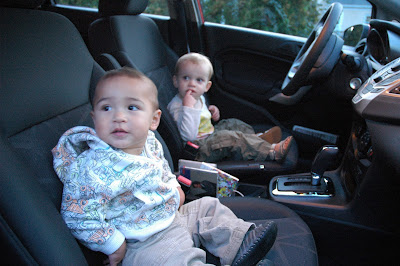 "I know, I know. It's our first time driving without the (ahem, so-called) grown-ups. Just don't worry, wouldja?" 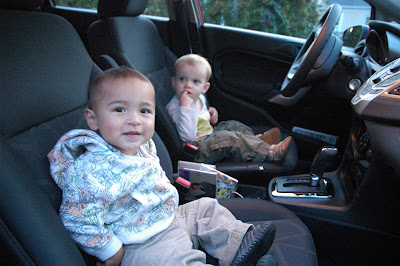 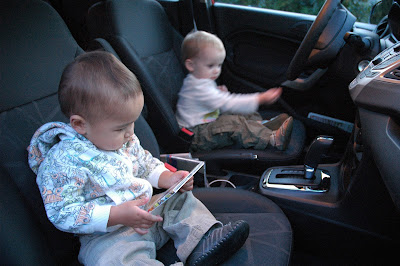 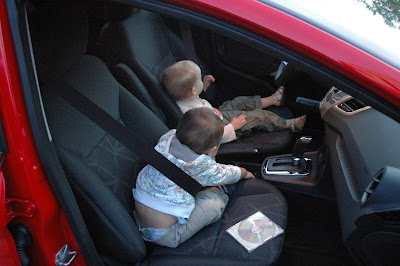 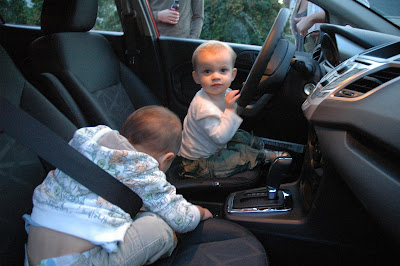 "Dude, you're too young, plus your diaper is showing.
Un-freaking-cool, yo." 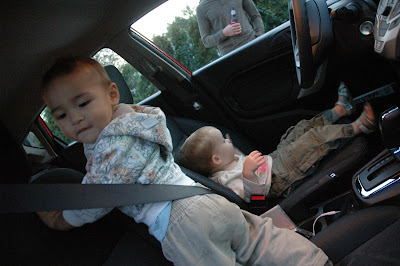 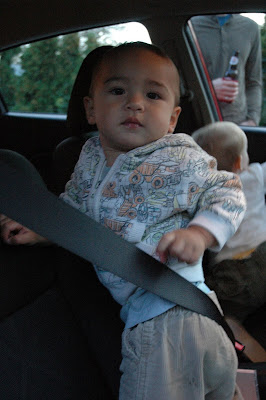 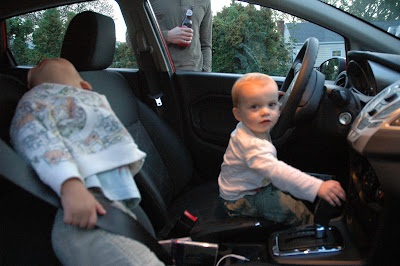 "Ellie you're killing me here. Strapping me in with the seatbelt on your dead-end street was supposed to be ironic and fun!" 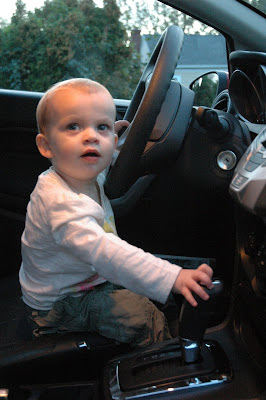 "Don't you worry, Jelly Roll - I got it.
Sit down -- we're going into turbo overdrive." 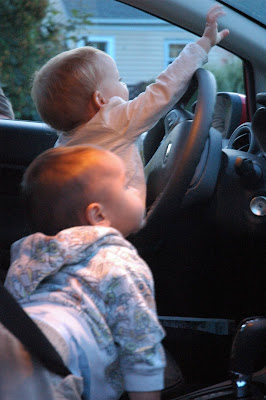 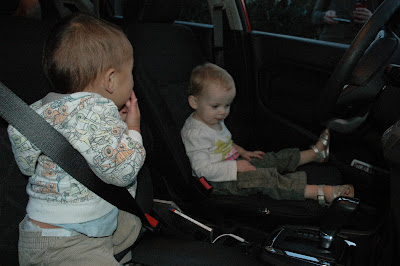 "Allright, Ms. G. You're awesome and you're a great driver. But in eight months? When I catch up to you? Move on over:
I'm totally taking the wheel."

LOVE! What an adorable little interlude, I love the sight of those baldies toddling all about your place.

Oh my, what a delightful treat on this Wed morning! Love it. Vino and sippy cups and pretzel rods and jalapeno humus? Um, yum! (okay, not the milk.)

Those kids are two cuties, and you 'grown ups' are not too bad yourselves. Wish I had you to drop in on when out and about on a stroller cruise! Plus little Miss C would just love to shoot the shit with Jelly Roll and Ms. G. Although, of course there would have then been serious competition for the driver's wheel ;-)