While I was tooling around Ausin with Jane, her boy Noah was making his way west for a spring break visit with his San Diego cousins! Jane and I had planned ahead, natch, and arranged for every detail to ensure that Noah was safely transported from the care of one dad in Chicago to another one in California. We distracted ourselves from considering innumerable complications that could potentially land Noah in Zimbabwe by chasing a million legendary bats, and were soon pleased to learn that the eagle had in fact landed.

I headed home the next day to find my kids and their cousin deeply entrenched in frousin hyjinx. I was so excited to see them all together, and looked forward to joining the fun.  It took me a little while to figure out that I was the parent in Peanuts, all: "wha WHAH wah wah WAH wah" in their ears, a pesky intruder who'd forgotten her place. My place was to produce food 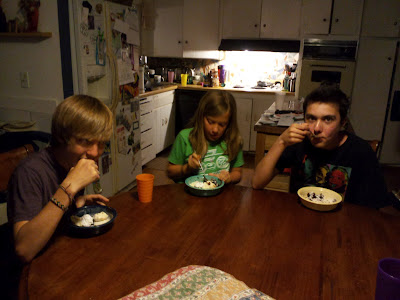 and take them to places 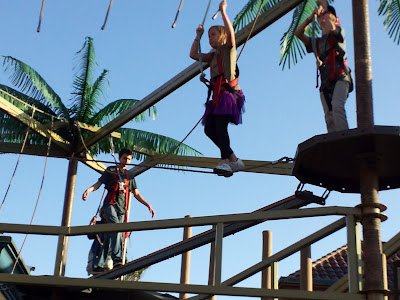 We spent a glorious Sunday down at Mission Beach, where the kids spent hours traversing high ropes and scampering up coconut trees and blasting through laser mazes and arcade games. I had prepped some kibbe that morning and packed a lunch, thinking we'd have lunch down there and then enjoy a big, late dinner at home. Everything was going according to plan and I produced lunch on demand. While they enjoyed their sandwiches, I happened to notice that it was 5pm. I though: "huh," and floated the idea that we could always save the kibbe for Monday and stay down at the beach. I wasn't sure what Noah actually wanted, he was being really polite and monosyllabic, and I wasn't sure if he was saying what he thought I wanted to hear or really telling me what he preferred. But when I mentioned that if we stayed, we could enjoy sunset at the beach,  no amount of teen  indifference could disguise his delight at that idea. So it was settled!

As I told my family in an email that night:

Noah was psyched to see the sunset, and of course my spoiled beach children were ambivalent and kept going for one more activity with their wristbands. I was keeping an eye on the time, and when sunset was 5 minutes away, I told the kids to run for the beach. Have you ever seen Noah run at full speed? Oh, what a sight. There are more angles on that kid than one can imagine is possible, and they were all flying in every direction. Head down, arms pumping... awesomeness.

How great that the frousins got that time together, especailly after you stopped with all the "wha WHAH wah wah WAH wah" HA!

And I must say I am somewhat impressed that the men were able to pull off the transport angle of the adventure.

THat is PURE AWESOMENESS. Thanks again, Jacq. He loved every minute of it! Jane

"Two Dads in charge of logistics? What could possibly go wrong?"

Jacqueline, I *love* this. So much. I love: "no amount of teen indifference could disguise his delight at that idea" and your Peanuts-adult-voice.

But what I love most is that beach. And those waves. I love to be reminded just exactly what it is that's so magical about San Diego.

And that last photo? Perfection indeed.

Absotively beautimous! Jacquie...you can write! Thanks for all of it...the pictures speak a thousand words as well!