hanging with the D-L

Okay, this is weird. I'm pulling a Beth today, rushing rushing rushing to get to my computer and now that I'm here and finally sat down to log in, I find that the entire blogspot interface has changed! Ellie? Beth? Did you know this? Be warned.

Anyway. It's been a funny week! Not funny ha ha, funny funny. Funny different. Like the way my gynecologist once told me I have a funny uterus. Ha ha ha ha. Oh, this is off to a good start.

My boy has been away on a very cool trip with his 7th grade class all week, he's at Joshua Tree, a magical, mystical place in the desert. It's been in the upper 90s all week there, I've seen a few photos from the school's facebook page. The kids are dirty and happy and sweaty, rock climbing and hiking and working on balancing rock sculptures and eating. They look really smelly. I'm going to wear a gas mask when I go pick him up tonight, and maybe tie him to the roof of the car. If it's good enough for Mit's pooch, it's good enough for my boy.

My girl had an adventure of her own 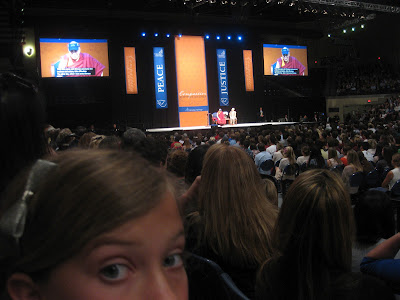 As Beth mentioned, we had the opportunity to attend a talk with the Dalai Lama. It was an amazing experience, as I described it to my family:

It was really something. The man has such an amazing presence, he's so inspired and purely good and smart and happy. And he's a big ol' goofball.

I was thrilled to be taking my girl along for this once in a lifetime adventure, it was unfortunate (fortunate for Beth) that my boy was off on his class trip because the message was one I would have really liked for him to hear. I wasn't sure exactly what my girl would take away from the experience, but I knew it would be something.

We had been warned about crazy traffic and parking woes on campus the day of His Holiness' visit, so I opted to just bring my girl along to work with me. She got herself all purdied up for the D-L 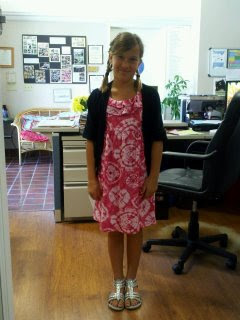 And then when we got to my office, she asked: "Who is the Dalai Lama, anyway?"  Whoops. Nice prep work, mom. Thanks to National Geographic Kids and a few other helpful websites, she had herself an expedited education in the hours before we set off for the big event.


The talk was held in a huge auditorium, and we had great seats. I had told my girl that there would probably be some stuff she didn't understand, but I didn't want her to worry about it. I told her to just open her heart and her mind and try to take it all in. I promised that we'd talk later about what the Dalai Lama had said. I just wanted her to look at him and see him and feel the unique sense of happiness that comes from being in a huge place filled with positive energy. It was really something.

She was trying to read along on the closed captioning that was available on the big screens, English is not, after all, the man's first language. She put her glasses on but the glare made it hard for her to see. Someone in our row leaned forward, hen she couldn't really see the screen. I saw her push back in her seat and take off her specs, a frown threatening and a furrowed brow. I gave her a hug and reminded her not to worry about trying to understand. Just look around, just be open to whatever, just have some jelly beans. It's all good.


Later, she told her Dad: "When I'm an old lady in the nursing home, I will tell school kids who visit all about the time I saw the Dalai Lama when I was 10."

Oh my word in heaven above how *awesome*! I'm so glad your girl got to experience it, and is so cool and awesome about what it all meant to her.

And I'm so glad the school kids are going to visit her -- that makes me feel a lot better about the whole nursing home thing.

This is great, Jacquie. What an experience! So glad for you and your two girls. And good luck picking up Mr. Stink-Bomb tonight.

What a great day for you and Beth and your girl - I'm awed and jealous. love, mom

Runt-coverd jelly beans at that!

Your girl was awesome! I am still thinking about her asking you, after HHDL had been taking for 5 or 6 minutes in answer to a question that was posed during the Q&A section of the event, if this was the question he had originally answered with "I don't know."

Ha ha ha. It was! I had long forgotten, but not your girl. He doesn't know, so, um, why is he still going on and on?

I loved being with her! 10-year-old girls are so great.

It was an awesome event that I'm so glad I was able to attend. Thank you Jacquie and Karen, and Jacquie's very stinky boy!