So last week I scored a couple of awesome wooden rockers from my neighbor.


I walked by those rockers day after day, and every day I wanted to ask Angel if he was getting rid of them, or wanted to sell them, but I never saw him out there.  I was so worried one day they'd be gone and I'd have to knock my head into the side of a barn -- if there were any around here -- and ask, "Why? Why? Why?"

In any case, Angel answered, "You can have them" and walked them down the street to our house before we had parked and gotten out of Subie.

They looked like chipped-paint crap, those rockers, but they were solid and they were true. They just needed some good old-fashioned TLC, Ellie-Style. 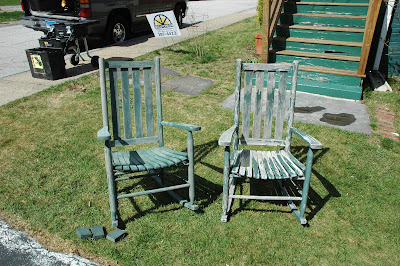 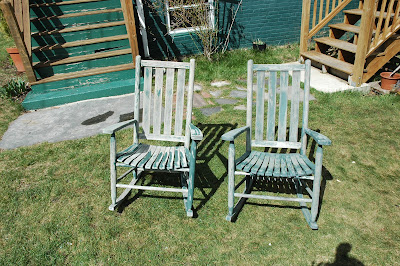 . . . then both were done.
I went to Home Depot and bought a quart of "Old Vine" paint. Sounds perfect, right? 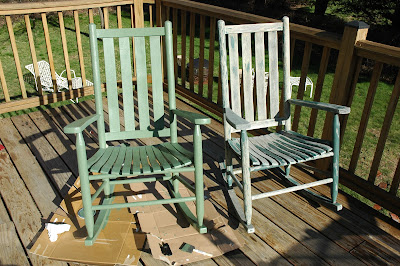 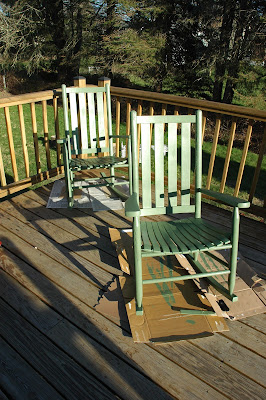 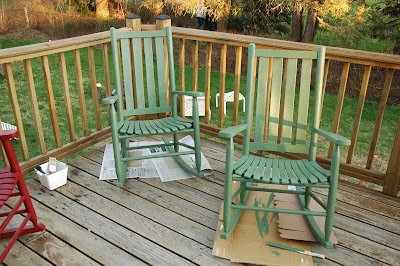 So? Whaddya think?
Sigh. I know; I agree.

The color is just not quite right. There's too much blue and not enough black in that green. They're too light.

I tried to make it work, though. I tried to like them.

A couple of friends came over and checked them out.

"Well, they're not terrible."
"I think you can work with them."
"They're going to age well."

All true, of course. They weren't terrible. But you know what else they weren't? Perfect.

My Dad loved to finish a project and have it come out just exactly the way he wanted it to. He'd measure and saw the last piece of wood to fit into its allotted spot, screw in the final nail, use the level to check for straightness, and deem it finished: "Only Perfect."

That's what I wanted from my rockers. Perfection. Not too much to ask, I don't think. I wanted my rockers to be Only Perfect.

So even though those rockers were carefully and patiently and thoroughly painted with two coats of exterior semi-gloss Old Vine, I went back to Home Depot to get a sample of the next darker color because I clearly had lost what had been my previously 100% successful color-pickin' mojo. 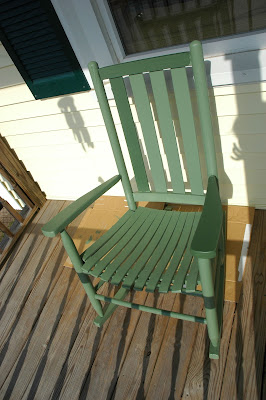 See that? See the new paint on the left arm (well, the left arm if you're the chair) and the back and that one vertical slat?

That's Fresh Pine. That's the color I was after.

So I went back to Home Depot to get more. 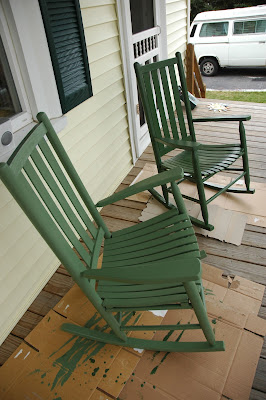 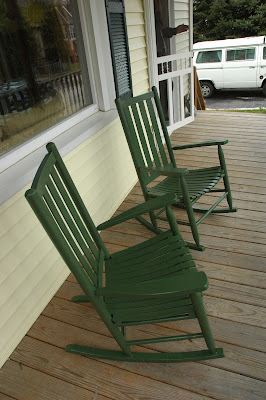 . . . and then the second of my new-old fabulous front porch rockers. And you know how they turned out? 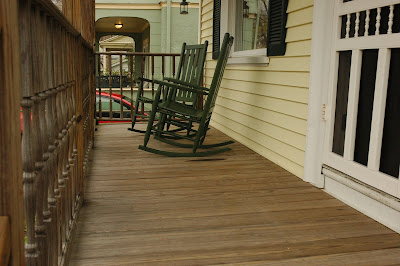 Oh, that's perfect, alright! Absolutely perfect! You don't want to sell those rockers, do you?

Perfect, El! Love. Can't wait to rock in those! xo

Love them Ellie, which one is mine?? mom

I didn't really understand your angst regarding the Old Vine color, but you're absolutely right (of course you are!) the Fresh Pine is perfectly perfect! Or 'Only Perfect' as you Coreys prefer to say ;-)

They look fabulous...you can come to my new house and do mine!
pat

Lovely! Your porch looks so inviting. So inviting that I consider myself invited! I'm going to miss the ghetto couch, though.

Ellie, Your chairs are lovely, and I can't wait to try them out too. And I don't want to be persnickety but I must clarify one wee point for the integrity of your dad's stellar reputation: I don't think he actually ever screwed any nails into anything... he probably hammered those straight things and screwed in the screwy things... Love, Martyjoco

Oh, Martyjoco, that is *so* awesome. I love that so utterly and entirely much.

That's *my* version of Only Perfect.