I’m one of those people who can be affected by movies. I really don’t watch that many, so I’m perhaps less cynical than some, less judgmental -- I’m not always looking for that microphone hanging down into the movie frame. Instead, I let myself be carried away by the story line, scenery, characters.

Last night I watched “Into the Wild,” a movie directed by Sean Penn that is based on the biography of Chistopher McCandless written by Jon Krakauer.

Most of you probably know the story. McCandless sets out after college graduation looking for adventure and truth. He thumbs it around the country, existing on precious little, eventually making his way to the wilds of Alaska. McCandless’ “great Alaskan adventure” is his last. After surviving the punishing winter, he mistakenly eats poisonous berries and dies. He was 24 years old.

It was the final frames of this movie that really struck me, specifically the final shot when you’re viewing a photograph of the real Christopher McCandless, not the actor, Emile Hirsch. It’s a self-portrait McCandless took just weeks before his death. An undeveloped photo that was amazingly recovered, with McCandless’ other belongings, by the hunters who found him dead in the abandoned bus he had been living in in the Alaskan wilderness. 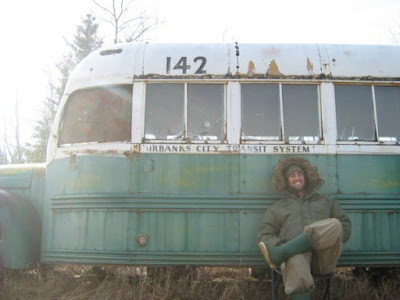 But what really hit me was the year of his birth -- 1968. I too was born in 1968. I too graduated from an expensive private school in May of 1990. I too went on a backpacking adventure soon after.

But we were so different.

I worked all that summer of 1990, and saved, so that I could follow these guys around while checking out as many European countries (and bars) as possible. 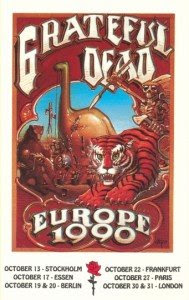 My mission was fun.

McCandless took the $24,000 left in his savings account, donated it to charity, drove his car west until it died, burned all his money, and set out on foot. He was looking for something more than fun.

What was his motivation?

Was he morally superior or just as mixed up as the rest of us?

In the spring of 1992, at the time of his death, I was living in San Francisco, working the punishing 5:30 am shift at Holy Bagel in the Haight, drinking too much, and seeing lots of live music. I had a tight group of friends, a serious boyfriend, and a couple of kittens. I was on my way back to graduate school in the fall, after my first attempt in 1991 ended in me leaving the University of Hawaii after just one semester. (I had island fever -- I felt too isolated, both geographically and socially.)

Last night I lay thinking about how much less courageous I am than McCandless; about the fact that I couldn’t even hang in tropical Hawaii for a year, let alone spend a winter solo in Alaska; about how little time I’ve spent on moral inquiry and higher truths.

But then my outlook shifted, and I came to the (perhaps convenient) realization that although I found McCandless’ story (at least the one told by Penn) beautiful and compelling, I think that self inquiry at a slower pace, the kind that’s formed out of daily life experience (the ongoing, sometime tedious day after day of our lives), can be just as powerful as something as dramatic as McCandless’ final two years.

Marriage, pregnancy, birth, mothering, divorcing, falling in love, raising children, all these things are, in fact, what life is about; making McCandless’ late realization that “Happiness is not real unless it’s shared” one we both've come to know is true.
at 10:16 AM

I have to agree with you it was a great movie, although a little extreme. I have to think that just doing what he did was something more than just finding one's self, it borders on an extreme case of the crazy.

I certainly have a tremendous amount of respect for him and what he did, it just wouldn't have been for me!

Beautiful, Beth. So articulate and thoughtful and wise.

Well, the thing about McCandless is that he didn't intend to die on his quest. Had he survived, he might be living a life much as you are right now.

It's hard to know why he had to go to such extremes. Maybe it didn't seem so extreme to him. After all, following the Dead was pretty extreme, too!

Now that we see his life through the lens of his early death, it acquires a romanticism that wouldn't exist had he made his way out of the wilderness, married, had three kids, and settled down in the burbs. Had he done that, I'm sure he would be happy and anonymous, with a good story for the grandkids. (Not the kids! Don't encourage them!)

I don't know, his actions made it seem as though he was in it to the end. I never finished that book, and did not see the movie, but when someone chucks it all and abandons things as they get used up (car, cash), and then eats berries in the wilderness, it sounds pretty suicidal to me. Maybe that was his intent all along, and he was happy and peaceful because he had no doubts. We'll never know.

That One Guy said...

I read the book, followed by seeing the movie, and you're right, we all have to get to the place where we realize what life is really made from.

Some of us have interesting, if not downright dangerous, paths to get there. Imagine what his passions could have done for society, or evenjust the people around him, if he were still alive, and had the same passion about finding out what life is about now??

And very jealous of your Deadhead times!

What amazing adventures you've had. I haven't seen the movie, but I did read the book and it haunted me. It was an incredible story.

This post is really thought-provoking, Beth. Who knows what really motivated McCandless? Whatever it was, I think all of us share in many of the questions he had; he was brave enough to ask them aloud and to look for answers. I imagine many of us think we understand, deep down, the reasons he abandoned the trappings of affluence, seeking something more fulfilling than money and the things it can buy. This sort of story drags out of geezers like me the questions we had in our youth and wonder at our failure to keep asking them.