There is this book that the kids and I love where the main character, Peter, is all up in arms because his house is so noisy. The bed creaks, the floor squeaks, the tea kettle whistles, the leaves rustle. Peter, as you can see in the cover illustration, is not a content man. 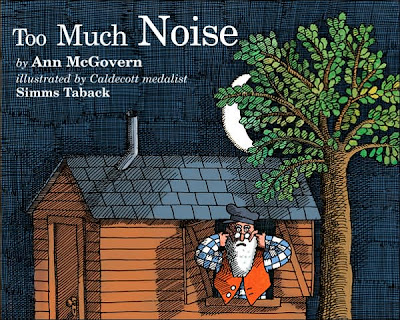 He does what all storybook characters of a certain age do when they have a problem; he goes to see the wise man of the village. The wise man mentors Peter through the endlessly amusing task of bringing a series of noisy animals in his little house.
.
The wise man tells Peter to get a cow. Then he tells Peter to get a donkey, then a sheep, a hen, a dog, and a cat.
.
Peter does as he is told, he gets himself one of each of these animals, and then he gets pissed.
.
He returns to the wise man, fists raised in fury, and positively blows a gasket describing the moos and clucks and meows and baaas and woofs that are now corrupting his house.
.
The wise man tells Peter to get rid of the cat. And the dog. And the hen, the sheep, the donkey, and the cow.
.
Peter does as he is told. Then he sits in his house, and the bed creaks.
.
"Ahhhh", says Peter.
.
The floor squeaks,
.
“mmmmm” says Peter.
.
The teakettle whistles, the leaves rustle,
.
“Ahhhh, mmmmm” says Peter.
.
He loves his quiet house.
.
I need to find the wise man of my village, because my life is too noisy and I don’t have any barnyard animals to get rid of. Sure, I could eliminate the woof, but that’s honestly the least of my problems. It’s the incessant talking that is bringing out the Peter in me.
.
At work, the people love to communicate. I am constantly being forced to break away from my blogging work to respond, resolve, reassure, redirect, and reprimand as needed. But I get paid for this discourse so I really can’t complain.
.
When I leave work, however, my time is my own and my mouth just wants to stay shut.
.
At the gym, I don’t have to talk. I’m not a whooper or a small talker. I’m just there to get the job done.
.
But when I get home, I don’t have a single digit in the door before my peeps start in with the talking. Questions, stories, announcements, questions, songs, fights, questions, requests, questions, questions, questions, QUESTIONS
.
why aren't they on the high dive? how many flips was that? why isn't the board bouncy? which one is USA? are we winning? we're americans, right? when's the election? what if it's a tie? will george washington get to stay president? why is the board so bouncy? are we winning? why'd george washington start the war in iraq? is it over yet? are we winning? what will you say if barack wins? will you be so happy you'll cry? why are the boys wearing those little blue panties? what would your face look like if you won the bronze?
.
until I LOSE IT. I’m like Sharpay during all the singing and dancing in the cafeteria when she steps up to the railing and yells: “Everybody QUIET!”
.
And then I just stand there and soak up the blessed (albeit stunned) silence for a minute before I allow the guilt to creep in about what a mean wife and mommy I am to wish so desperately for a mute button to control my own family.
.
Following the logic of Peter’s wise man, I could either encourage my family to increase their volume for a while, or I could increase the number of mouths talking at me in my house for a while.
.
After a few days in either scenario, I’m sure the return to normal would seem blessedly serene.
.
I can’t risk it though,
.
Not when the hush of Baja's beaches are so close by.
at 5:15 AM

I love silence. And don't worry - I have those moments to where I let out a tribal yell for everyone to shut it followed by the intense guilt.

I sometimes will actually lock myself in the bathroom and put ear plugs in and tell my children I'm sick and need to be left alone for a few minutes. I never get more than five, but it works.

I also hide in the basement. They don't like it down there and so I will go do laundry or clean or sit down there for awhile...I know your pain!

My mantra these days is: Someday, my house will be clean and quiet... and then I will hate it.

The quiet will come, Jacquie, along with everything staying where you put it. You know, it's just around the corner. Stop for just a second and envision the absolute vacuum of sound that'll be in the house after you send your girl on her way to college. Now, answer me, are you really in a hurry to get to that moment of peace?

Will my husband go to college, too? Some of those questions were probably his, with a few "what's for dinner? where are my sunglasses? does this milk smell bad to you? remember that time when....

I hear ya though, and I'll probably hate my empty nest after about 2 days. But those 2 days? Ahhhhhhh, Mmmmmmmmm

I'm pretty sure that "why are the boys wearing those little blue panties?" was one of Bill's questions. Right?

Would you be happier coming home to a dead quiet, lonely house every day? (I'm banking on you saying no and realizing that all that noise means happiness and love; but, if you say YES, then I guess it's time to abandon the husband and kids and go on the road with a backpack or something)

I do not yet have children. I do yell at my dog when her barking gets on my nerves. On a side note...two of my all time favorite children's stories were/are..Alexander and the Terrible, Horrible, No Good, Very Bad Day...and Cloudy With a Chance of Meatballs.

Sometimes, silence is golden, and othertimes I NEED TO FEEL THE NOISE!!!

So here's my two hundred and two cents. I think I love silence, too; I picture myself as the sort of person who drinks it in when it comes to me, perhaps to think great thoughts or reach some kind of meditative, restorative space, et cetera, et cetera. But here's the truth: I avoid it. My own incredibly smart inquisitive boy has been out on his own some long time now, & he's doing well. He has his own busy life, and we don't get to yak quite as much as I might like. That's okay, I get it, and I'm glad he is well-launched.
P & I have the two orange cats, and as cats go, they are on the quiet side. So, what do you think we do? We put noise everywhere. My alarm wakes me to all-news NYC radio, listening to Traffic and Weather Together On The 8s every ten minutes between the news of the day. Downstairs, breakfast and paper come with a nice alternative music station as accompaniment. In the shower, it's either more news or the breakfast station. In the car, I have station A, station B or this week's fave CD. At work in my beige cave, it's either the white noise of the AC or maybe headphones plugged into the computer with WDVX, a fantastic community radio station down in Knoxville, TN. In the evening, as we move about the house and sit out on the porch for peanuts/drinks, the kitchen radio may have the Yankees, the TV the Red Sox, and the little radio outside set to the Mets station. Evening chore time, we might put on a CD or one of our cool XM radio stations. Wait - have I mentioned we live on a REALLY busy loud street across from the emergency room? Sometimes at night, when Ellie & Mr. S. are tossing & turning due to some puny crane beeps a mile across the river, I have the LifeStar helicopter landing about a hundred yards outside my bedroom window. And the WHOOOSH of the hospital AC cycling through its ons and offs all night. Amtrak down in the woods. Oh, and don't forgot - PD is a guitarist in a rock & roll band. We have guitars and music,too.

I don't know what my point might be here. I live in a city, it's loud, I choose to make my own part of it louder. I don't remember embracing extra noise back when Abram was around the house; we were busy answering questions and reading great books. Although I feel lucky in my whole life, I REALLY treasured that part of it, and it was over in a blink, really. Rita's right.

p.s. TV in the other room informs me that the Sox have just gone up 9-0.