My daughter’s preschool class has created a store, a play store that they stock with recycled cracker boxes and juice bottles, a cash register, and more. It’s great fun for them and my youngest loves to restock the store with her family’s castoffs. Today, as I was washing out a cranberry juice bottle for her to take, my older daughter asked me, “Do you think they’d let us bring in a peanut box?”

I immediately knew why she was asking. Peanuts, poor innocent little peanuts, have become taboo in preschools and on elementary school campuses. So she was not surprised when my reply, was “No, they wouldn’t let us bring in a peanut box.”

I recently discussed this same topic with some friends over dinner. When did the peanut allergy epidemic hit? What has changed? What’s so dangerous about peanuts?

This post it not meant to offend anyone who suffers from, or has a family member or close friends with peanut allergies. I know they are real, and very serious.

But when did this happen? How did it become so prevalent?

Someone suggested that maybe it was just under-diagnosed back then and that when a child died back in the 70s of unknown causes perhaps it was due to a severe peanut allergy.

Obviously something has changed. These allergies are real. But what is it? And doesn’t it worry you a wee little bit?

Is it environmental? Is it mothers eating peanuts while pregnant (which they’ve always done, btw)? While breastfeeding (again, not new)? Is it soy formula? Is it something else?

I have no earthly, obviously, or I would not be throwing this out there. But I wish to hell someone would figure it out, because I love peanuts – in the shell at the ballpark, in my PB&J, in my Reese’s Peanut Butter Cups, in my trail mix, by the handful out of a bag. 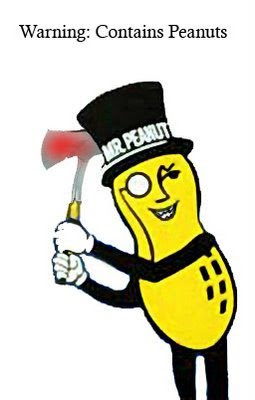 There are a couple theories about the new high incidence of peanut allergies.

First is the idea that more people are generally allergic these days. More cases of asthma, more allergies. There is a theory that we live in such sterility that our bodies are reacting aggressively against any irritant, that because we aren't exposed to much and our bodies don't have much to fight off on a regular basis, they fight off things that would normally not be harmful.

The other theory is that this increase in nut allergies specifically is due to genetically engineered foods. That they've been messed with in such a way that some people's bodies don't deal with them correctly.

Naturally, I have no idea, but those are two common explanations I've heard.

My husband joked around and said he could never love a child with peanut allergies. I thought he was really mean, until I realized that I could never have Thai takeout again. Oh man.

I think the theories Rita mentioned have merit, another example of how we've screwed up the world for our kids!!

I thank my lucky stars that my kids don't have food allergies, if it's inconvenient for us bystanders, just imagine being the parent trying to pack a lunchbox, then sending your kid out into the world with that kind of risk. I've seen allergic reactions in kids, and it ain't pretty.

When my son found out that about his allergy, he said: "You mean I can't eat cats?"

Me, I love a good peanut.

My theory is that peanut oil is used so widely in foods now. So all the extra exposure develops allergies in some people.

I think there's also some mass hysteria around it.

Poor Mr. Peanut... he's getting a bad rap over this. I'm glad I grew up in different times. We've never believed in the 'everything needs to be sterile'. We don't use lots of heavy cleaners in the house, don't use sterile wipes in the car or at the office..... have just let germs do their work and let our bodies learn to fight them off... but we may be the last generation to have done so.

My only allergies came after 25: hayfever and poison ivy. And the only time I got sick during our 7-1/2 years on the road were when we were with kids. Because *they*, clearly, have diseased friends. I've gotten sick *twice* during my Connecticut winter/spring, though. And I think that's because I'm not camping and not everywhere; just cleaner and in one spot, and not sleeping amid the westy canvas mold. Mold=Antibiotics! Um,at least in my mind....

Just read this week ( will post if I find it) that many kids outgrow their peanut allergies and many parents don't realize it.
In my experience in the classroom, I had only one student with a peanut allergy. It was a Quaker school with no cafeteria so we had a Peanut Free table for him to eat lunch and snack at with kids who did not have peanuts...no hysteria for everyone, just reasonable precautions. (separate labeled sponge to clean the table, etc)
Public schools have more kids and more liability worries but none of my 3 kids have had any peers with allergies in 9 years of public school.
I can't imagine having to think of something other than my standby PBJ for my kid's lunch....but I do have fond memories of who packed THE BEST school lunch at Stoneleigh Elementary!