It all started at the Tavern on Wednesday night. 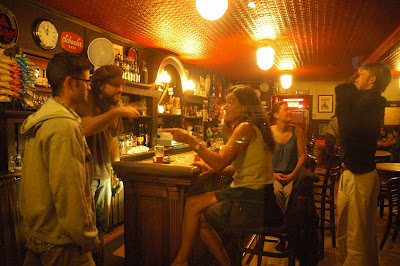 We all got loaded and Owen and I decided that the very next morning would be the perfect time to finally settle, once and for all, the trash talk that's been swirling around all summer about The Race. A swim race. 100 meters. Winner take all.
.
Bill warned Owen that it was a bad idea to race me, but did Owen listen? No. No, he did not. 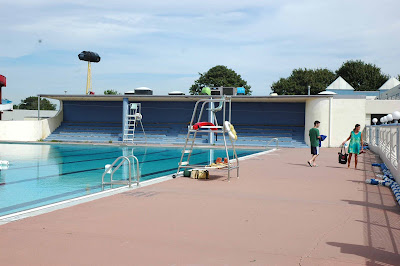 It was a beautiful, quiet, Thursday morning at 11 a.m. at Ocean Beach. I guess school must be back in session? 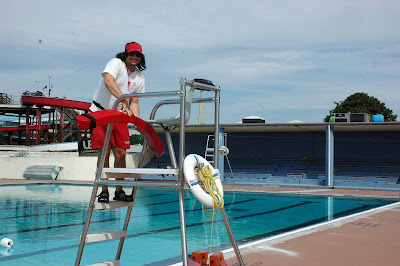 A kid named Mike duly took his place as our cheering section lifeguard. 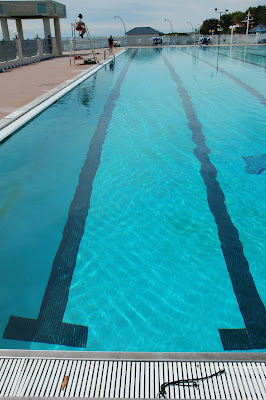 A 50 meter pool is not for the faint of heart. 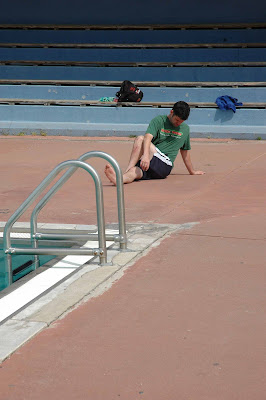 Owen stretched for what seemed like hours. Me, I stood at the edge of the pool repeating, "Are you ready?" 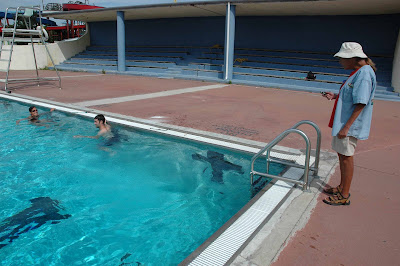 Our delightful friend Deb works at Ocean Beach, and has a whistle. She was our designated starter. We had to start from the wall, instead of diving in. I think that was protest #2 for Owen. Protest #1 was I was 5 minutes late. Because of Bill. 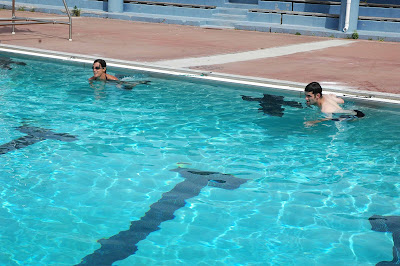 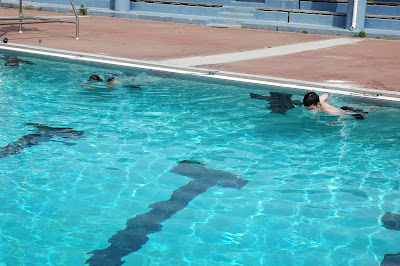 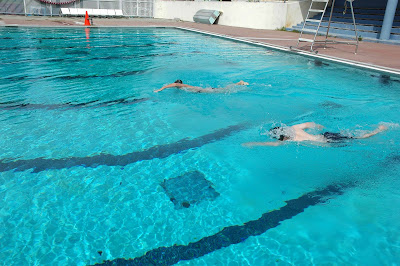 It started out pretty close; it really did. 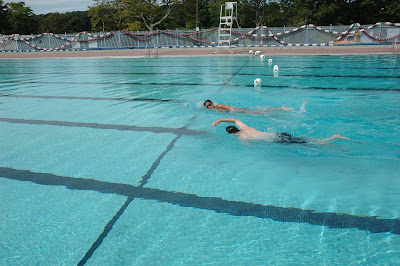 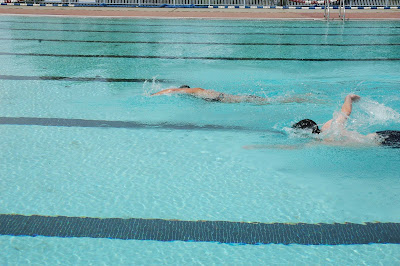 I started to pull away, though. 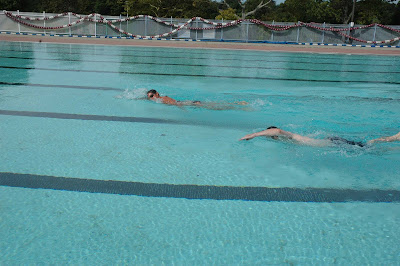 And even though we were in the midst of a fierce competition, it was great being out there, being in a pool, being outside and alive and doing something cool on a summer morning. 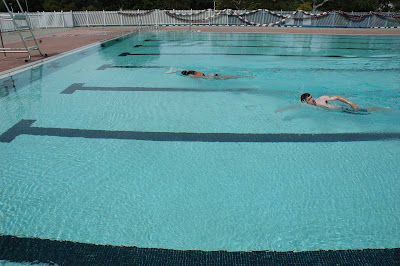 By the time we we about to hit the wall at the 50 meter mark, the race was mine. 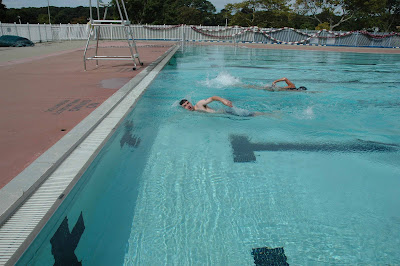 I owned the second 50 meters. 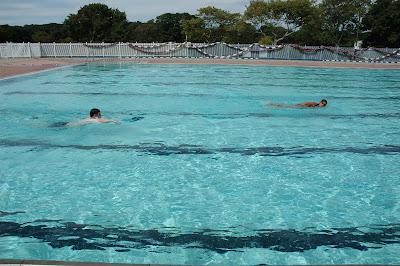 I think at this point Owen decided to give up smoking . . . 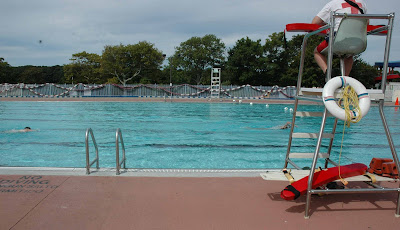 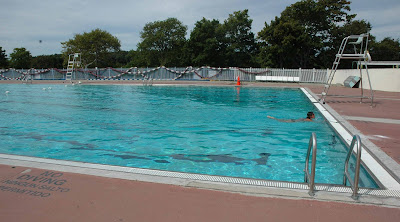 And..... Done. With nary a competitor in sight. 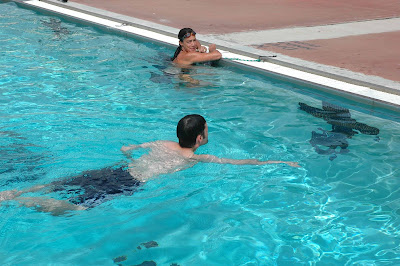 Oh there he is. 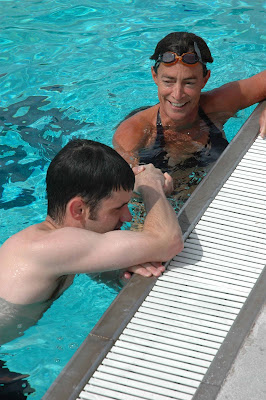 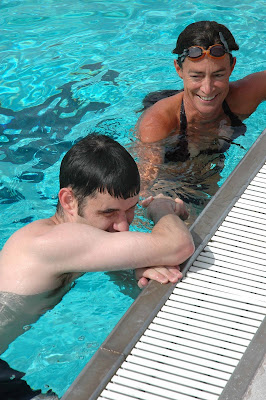 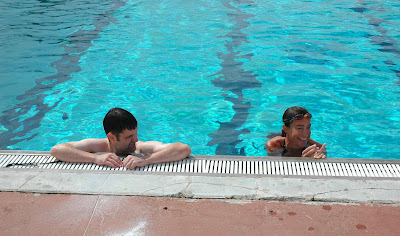 Better luck next time.
.
Now excuse me while I do my victory pool dance.
at 5:03 AM

Oh my god, this was fantastic. The pictures, the commentary, the result, everything.

No, PI, it was the rotton lifeguard who wouldn't let us dive in. And of course a bikini! I've got my reputation, um, blog, to think about!

Thanks P&D. It was a *fun* morning. Especially for me.

You most definitely also win the skin tone contest. That boy is w.h.i.t.e. Better luck next time, Owen!

Silly man...what WAS he thinking taking you on?

You are da man, Ellie.

He really should have known better than to race you, but he's so competitive. Nice job to you both!

Congrats, El! Condolences, Owen. What are you, nuts? I must confess, though, that ever since I heard about this race at Ocean Beach, I imagined you were racing in OB, not the pool, LOL. I was wondering what markers on the beach you'd use to measure 100 meters...
So psyched to see you tomorrow, Almost Birthday Girl!

Wow! Awesome job! Does he owe you a few beers now? Count me as one person intimidated by the 50 meter pool!

Oh, he really should have known better just by comparing biceps!!!

He owes me an Owen-cooked dinner. Me and The Mistah, our official photographer.