I'm sure I'm not alone; we all do things that don't make the best of sense, right?

I've caught myself doing these types of things a lot lately.

The first thing on today's "who does this?" list is something that I actually think many other people do. I rip pages out of magazines that I'm going to use/need/do/refer to later.

I actually have 5 or 6 file folders where these ripped pages reside. Eventually.

You know, one folder for recipes, which is giant and bulging and subcategorized into entrees, appetizers, desserts, etc. by a very advanced paperclip system; one for interior design ideas; one for landscape design ides; another for kids' stuff; things to look up on the Internet someday, etc.

These pages, however, remain in various locations throughout the house until, months later, they make it into the folders where, of course, they are rarely, if ever, seen again.

Here are two recent rip outs: (1) a recipe for jalapeno-lime spritzers that you may or may not want to make into a cocktail by adding some tequila before serving(?). Looks refreshing, doesn't it? 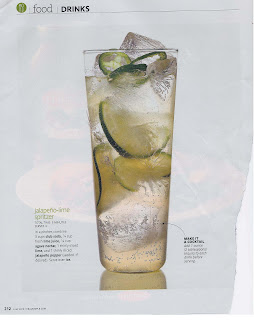 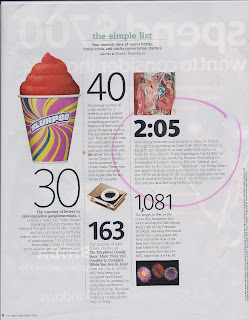 and (2) "the simple list" from Real Simple from July '10. Of course, it took me minutes to figure out why I even ripped out this page. Was it the free Slurpee reminder? The number of songs needed to provide entertainment for a 3-hour party? The information provided on doodles you can draw while on hold? No, it wasn't. I ripped this one out so that I can someday (when I have the extra 2:05 minutes they claim it will take) use this information to "breeze through the paintings in New York City's Museum of Modern Art" by viewing a new video that catalogs every painting from the 1880s to the 1970s. Worthwhile, right? (Yes, very worthwhile, so guess what I did? I circled it in pink so I will remember not to forget next time I see this ripped out page in the dusty folder.)
The second silly thing I caught myself doing this weekend was buying the second in a mystery trilogy. I'd never heard of the series before. But this sequel to the "internationally acclaimed The Skull Mantra..." looked good. Shan Tao Yun is going to "fight to restore spiritual balance to the ancient and tenuous splendor of Tibet." Who wouldn't want to check that out? Plus, it was 75 cents at the weekly library book sale. 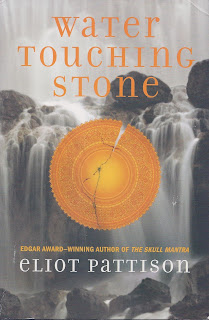 But now? Now I have to get me a copy of The Skull Mantra so I can then read, Water Touching Stone, my recent purchase.
Anyone have a copy?
The third, "who does this" subject is a bit of a departure from the other two above.  I'm wondering if anyone else sees something that is probably completely benign, but is cynical nonetheless. In this instance, I find myself wondering if I'm just really naive or a cranky skeptic. Here are the details...In the last week I've noticed two  "Reflexology & Massage" parlors in different areas of San Diego.  They were very similar looking from the outside, both advertised really cheap prices ($40 for a 60 minute full body massage, and $20 for a 60 minute foot reflexology massage), and both looked, um, I don't know, very, very, well, you fill in the blank: 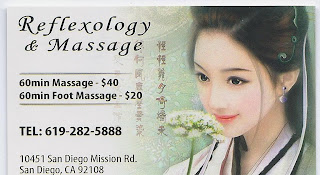 Illegal? Brothel-like? Like the "Oriental massage" of days' past?
But don't let it think it stopped me. No. I love reflexology massages. They are my very favorite. And the place above is in the strip mall right next to my office. I walked in. A woman came to greet me and insisted I take a look around. She showed me the massage room, told me they used oil, then showed me the reflexology room, which contained 3 plush lazy boy-type chairs that recline all the way.
And they're open until 11 pm.
It was weird.
But $20?
You in, Jacquie? It could be our next post-Chiba adventure!
at 9:24 AM

It might be a great experiment to swap recipe folders. I've been tearing out recipes and crafts for year. I finally got those clear sleeves for a 3 ring binder and loaded it up. I think I've used 3 in the last 10+ years, but if I swapped with someone, it might spark an interest to actually try something new.

Have any rip-outs of clever halloween costumes?? Sally doesn't think I can whip up a Sally Brown (Charlie's sister)costume in the time allotted and her dad thinks no one will know who she is without a Charlie by her side.

needs to proofread in PA said...

that would be YEARS, not year.
My husband wishes it was only a year :)

Oh, I do so so many things that don't make any sense in the vast history of the planet. Daily. But I do not:

1. rip pages out of magazines. Our neighbor gives his us his New Yorkers when he's done and one can never get through that whole magazine in a week, espcially when one's book is calling (as it is now, as a matter of fact). If I don't finish it, I just put it in the pile. But not without checking the cartoon caption contest first, because that's the best part.

Wait, you could do all three at once, Beth, couldn't you? Organize magazine file folders while getting a reflexology massage? Oh, wait, that's a dumb idea. Never mind.

See? There I go again. Making no sense at all.

I was at Chiba this weekend and noticed that place... sort of an odd spot for a brothel, but what do *I* know of such things? Maybe they do good business (love you long time) after a Charger win (as if) or happy hour at McGregors.

I think you should write a series of mystery books about the massage parlor. And I think I should start a service that compiles all of the magazine pages people collect. I know way too many people with the same habit...