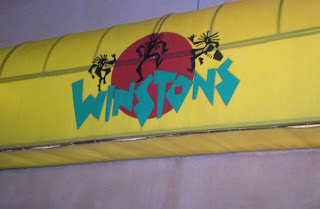 Winstons does not mean anything to most of you, less, even, than baseball means to me, but if you spent anytime in college in San Diego, you spent some time at Winstons (or you should have).
I spent A LOT of time at Winstons. It was easy to get into with a fake ID, and in fact, if you went early enough they didn't even card you. So I ended up spending many a long night at Winstons, getting in by 8:30 pm so the doorman wouldn'd scrutinize the beat up Maryland drivers license that an older friend had given me, and staying until the band stopped playing, sometime around 1 am. That's a long night of drinking, my friends. And as Thursday was the best night to go to Winstons, I made it a rule to never have classes on Friday.
But those days are long gone. In fact, my 20th college reunion is this weekend.
The good news? Winstons is the same! It's just as dark and divey as ever. It's still a young college crowd in there and still has the tiny women's bathroom with the one tiny sink and two antiquated stalls with toilets that backup too easily. Sadly, the bathroom walls no longer sport actual graffiti, but instead there are these more benign blackboard stall walls, but hey, it's something. 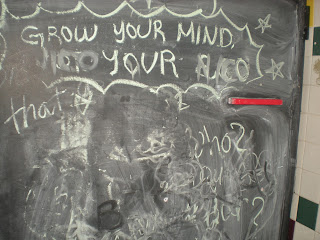 In the bar proper there are still the same belly tables, same stage and small dance floor. I can't be certain this is the same disco ball (or even remember if there used to be one), but we'll pretend it is. 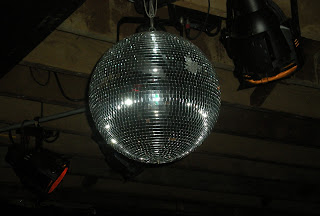 We ended up at Winstons last night thanks to our good friends Johnny and Johanna.
﻿ 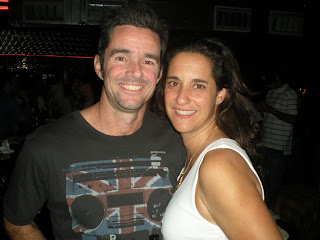 They are very hip folks, of course, and knew that Trevor Hall was playing.
They'd first seen him when he opened up for Michael Franti at the House of Blues a few years back, then at an intimate acoustic Koffeehouse Music show at Johnny's parents' amazing house in Malibu. The kid is young, but has already played with the likes of Ben Harper, Ziggy Marley, Matisyahu, Los Lobos and more.
The show was slated to start at 9 pm. 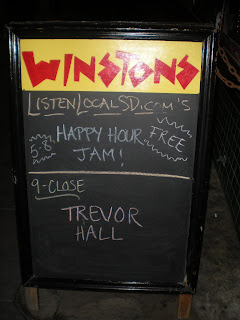 We arrived just after. Silly middle-aged folks! (Sorry, Jo, you're included by association.) Winstons has not changed in that respect  either-- nothing ever starts on time.
And no one cares because they're all throwing back beers and don't have any classes tomorrow. They certainly don't have babysitters waiting at home.
So, we waited for the show to start. The show that started with good ol' Matthew Santos, not Trevor Hall. The show that started at 10:10 pm with Matthew Santos and lovely Annalise (?) (who was just asked to join his tour after meeting him in Austin last Saturday after she sent him youtube videos of herself singing in harmony to his songs. Gotta love a life that gives you the flexibility to say, okay, I'll come, and jump in a van headed to California.) 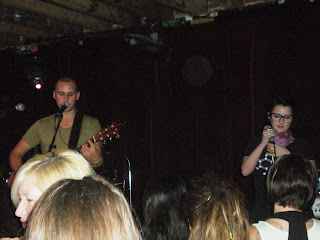 They sang, and we listened. And waited. For Trevor.
Tick Tock. Time kept passing. Our babysitter curfew was 11:20 pm. Sigh.
But finally, at 10:55 pm, there was Trevor. 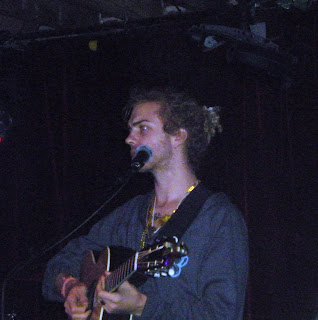 After a quick sound check he let down his hair and started to play, sing, and generally rock the house. 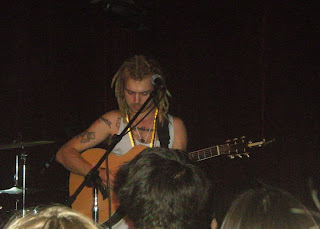 Okay, so we were only able to hear five songs before we raced home to the sitter. But it was worth it.
at 9:54 AM

Oh, you're so hip Beth! I am impressed.

And you were connected with baseball, at least tangentially, because Winstons is the bar San Diego's own big fat David Wells used to go drinking, and get into bar fights. During the season.

And finally, um, what are belly tables?

You know the high round tables that you can stand at drinking? You'll see them at cocktail parties and bars like Winstons?

Ah so. I have never heard them called belly tables before.

But now? That's all I'll ever call them.

I haven't been to Winston's in ages - perhaps not since the night of my bachelorette party, which I seem to recall my then-fiance crashed, and then crashed into a waitress bearing a full tray of drinks, and then got tossed out like a David Wells wannabe.

I can practically smell the place from memory.

Hmm, perhaps they aren't called belly tables too often, 'cause when I just googled it, this post came up as the 8th hit!

BUT, to my credit, the first hit is for Event Party Rentals, who they rent out both belly tables and belly chairs.

I think everyone should call them belly talbes (and chairs) from now on...