It's March Madness, people. The most exciting sports month of the year. Unless it's the Olympics. Or the World Series. But *still*.

I love this time of year.

Yesterday? The mighty Tar Heels of North Carolina, the mighty Wildcats of Kentucky, and the mighty Buckeyes of Ohio State went down in their conference tournament finals. And Friday night the loathsome OrangeBastids of Syracuse went down in a fiery mess to the Cincinnati Bearcats, who were beat the next night by the ultimate Big East winners, the Louisville Cardinals -- who could have predicted *that*?

MB and MD went to the Big East tournament at Madison Square Garden, and look who they ran into: 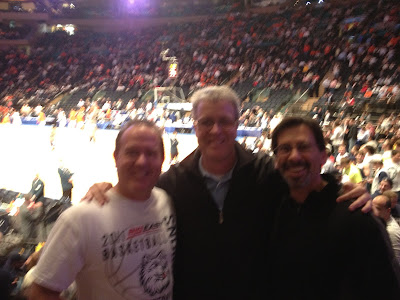 Mistah's and The Dowd's old college buddies Brian and Nardo. Remember them?

I'm telling you, March is Madness.

The Dowd sent us this photo of his UConn garb on his way down to New York for the Big East: 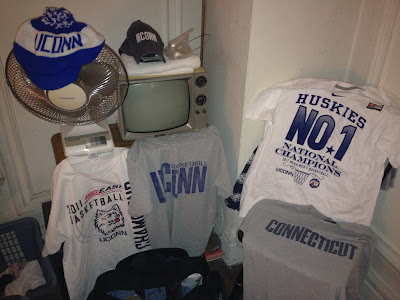 Pretty impressive, and it doesn't even show his Huskies Perspiration Trousers.*

And us? Well, our UConn shrine may not be quite as extensive, but it's certainly as heartfelt:


Yesterday, Selection Sunday, it was determined the #9 UConn Huskies will play the #8 Cyclones of Iowa State on Thursday. 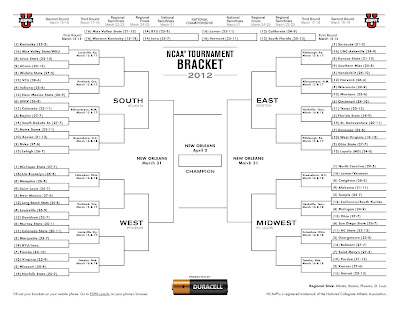 I'm ready to run circles around those dang Cycones.


I've said it before and I'll say it again.

You crack me up, Ellie. As does the Dowd.

Your fancy words are a hoot, and your UConn knome, or whatever the hell he is? Awesome.

I'm so glad you provided the link for our past glimpses of Brian and Nardo. I, for one, need the reminder.

And one *always* needs to be reminded of the Dowd's incredible outfits ;-)

Glad you ghave the madness to get you through the month. April is next! And them May, and then, well and then SUMMER!

I love that you spell gnome with a k, Beth. "I know there's a silent letter, but which one is it?:

I think that was a truly inspired birthday gift, wasn't it Ellie? And where's your warm fuzzy husky DAWWWWWG blankie from the westy?

And what the hell is a bearcat? Is that a real thing? Skeered.

March madness means nothing to me other than the pleasure of extra happy hour specials, but I do always enjoy a glimpse of the Dowd's pasty kneecaps.

What do you mean "loathsome" Syracuse???
Like everyone from Upstate NY, I am a huge Syracuse fan. Go Orangemen!!
Pat

(Why don't these comments include spell check anyway?)

Oh, Ellie, you are I are meant to live closer in March. I *love* the Madness, and haven't had a horse in the race for quite awhile. Beth got to witness my enthusiasm when I visited her in 2009 while the NIT final was going on and Penn State took home the ranking of #65. (it would have been more fun if SDSU hadn't lost in the semi-final)...and that was just the NIT.
I'm sure my mom was dancing in heaven as her alma mater, FSU, stole the ACC title from UNC and who knows what they'll be doing later this week...but I'll be watching. Good luck to your Huskies. Last year was perfection, but we all know what Madness can happen in March :)

Pat, you are dead to me.

And Oh. My. God Jacquie! I forgot the Husky Dog blankie! I've gone done lost my mind. That's *the* anchor of the shrine -- Bill gave me that blankie before we were married like 74 years ago.

Congrats to your Mom, Central PA. Even Chapel Hill Girl handed it to the Seminoles - pretty inspiring team.

Now if you'll excuse me, my knome (!) and I are going to have a couple of drinkie-poos in our UConn glasses, under our Huskey Dawg blanke.

(And Pat, you're not really *dead* to me. But now that you've hit the highway, it's time for a new team.

And there's *plenty* of room on the UConn bandwagon.....)

Mark, that's the cutest little TV I've seen in a while! Basketball probably looks better on the home-theater sized one I believe you have, but this one is just perfect for old reruns...

FSU is my second choice as a Florida gal!
And they did not steal anything...come on people...
Pat