The minor league baseball team in this area used to be called the Norwich Navigators. Nice ring to it, right? New London, the whaling city; Groton, the submarine city; boats, water, steering.

Now, though, it's the Connecticut Defenders. 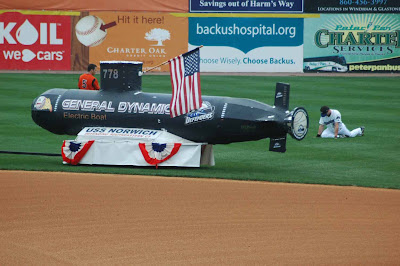 Complete with a nuclear submarine float. Sigh. I miss Ahab and his cute little harpoon. 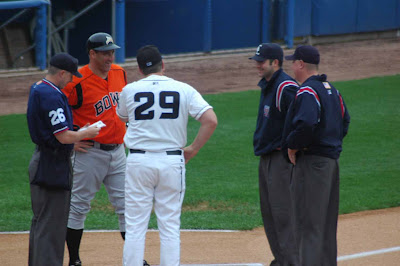 The guys brought out the line up cards, as they do. But, really? I know it's all a ruse. I know what they're talking about. “Candlesticks always make a nice gift.” 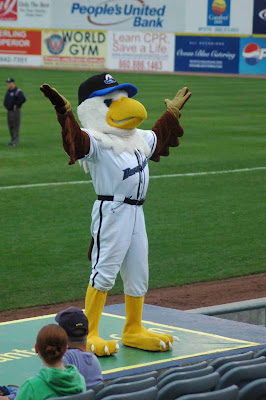 The Defenders' mascot is a chicken. Clearly. Johnny Slips, however, insists he is an eagle and he is called Cutter. Yeah, right. 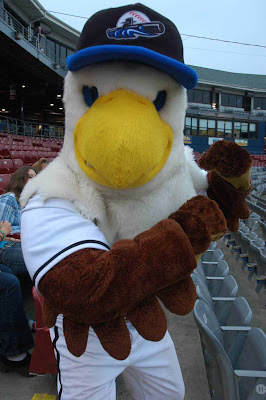 I still say he's a chicken. 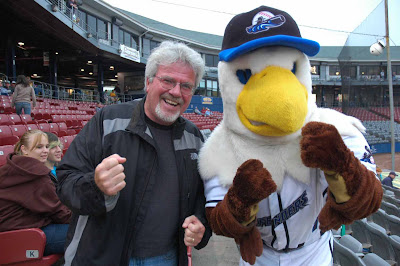 I only recently got a real handle on the difference between the words pugnacious (argumentative) and pugilistic (fights with fists).
.
And it looks like we got a little bit of both here . . . 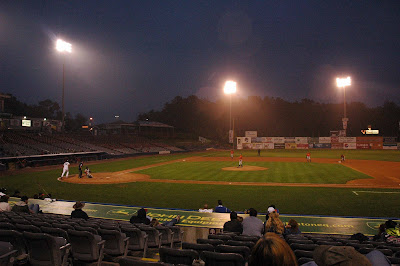 There was a serious, conspicuous, lack of peeps at the game. 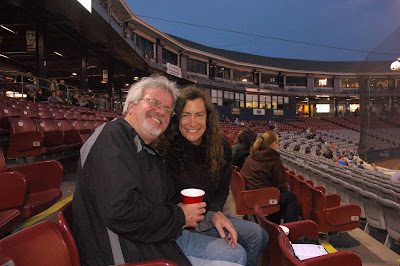 I think there were only 12 people there. Including me and Johnny Slips.
. 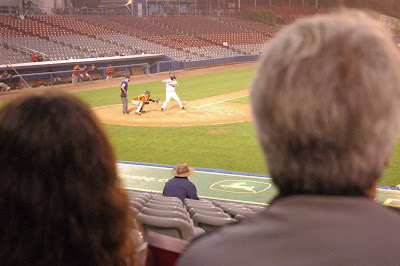 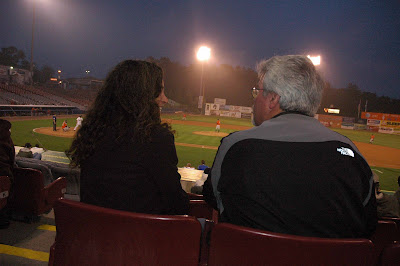 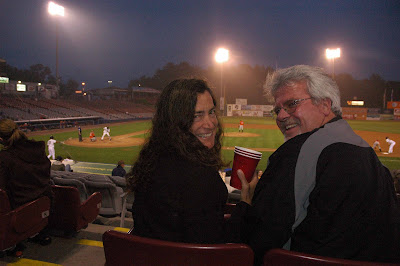 . . . and we enjoyed less than 2 hours of baseball. The game was over before we knew what hit us.
. 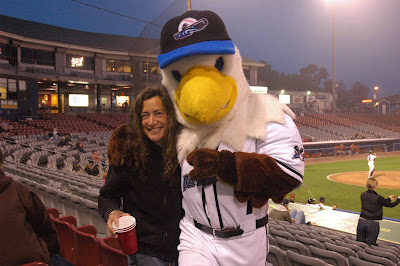 Aw, finally the chicken eagle made his way over to me. Since there was no one else in the stadium, the flying rat bastid. 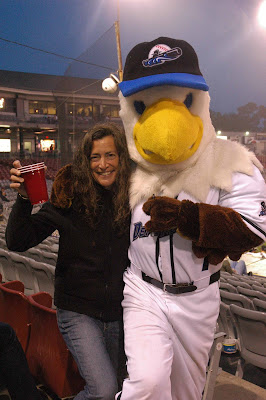 I'm goosing him; can you tell from his expression? He loved it. 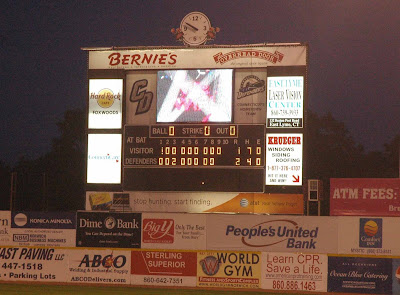 The bad guys won. Those crumbs. 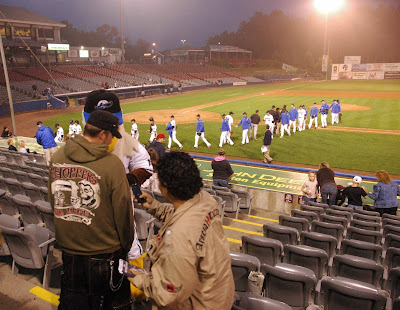 And the teams congratulated eachother on how badly they both played. 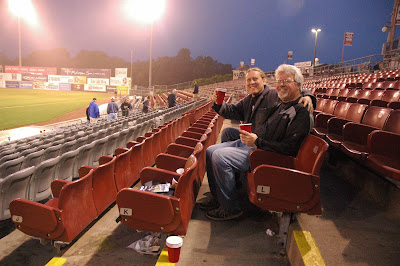 “Okay, folks. Thanks for coming.” But it's over too quickly! We've still got beer to drink! 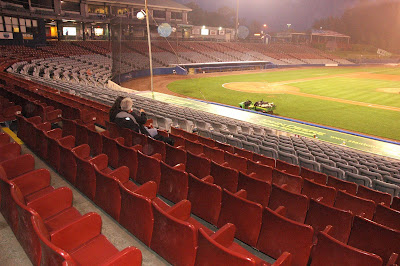 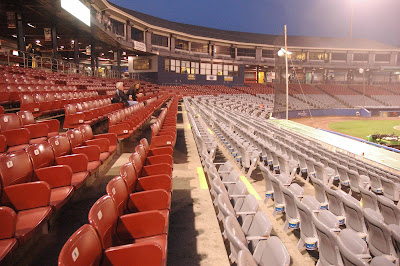 Have you ever noticed how on Thirsty Thursday they bring out the "small" cups. At least that's how they roll here in Utah. Bastards.

Love the Bull Durham reference, quite possibly the best way to spend an evening!

Libby, Utah and boozing will always have a contentious relationship.....

Looks like that's a great venue for your family reunion...hold lots of people and on Thursday, the beer's cheap.
State College got a minor league team (the Spikes) 3 yrs ago and a beautiful new stadium that both Penn State and the Spikes use. I need to find out if a Thirsty Thursday is one of their promotions since serving beer was a sticking point during planning (no other University venue is allowed to serve alcohol...the drunk football fans provide their own)
The coolest part of having a minor league team is that the players live with families all over town. My kid's piano teacher has had a strapping looking ball player in her home the last 2 yrs, which has meant a lot more loitering during lessons :)
Maybe you and Mistah should look into hosting a player...

I liked the old name, but not the old logos. I love having a minor league team in the area and they are always doing specials. It's a great way to spend a summer evening.

Now if we could just replace the Giants farm team with a Mets team, I would be in heaven!

Cutter the Chicken, love it!

WoW!
Looks like you had your choice of seats!
(my husband had the same response as you to the "beer baby." Perhaps the guy had gone to too many Thirsty Thursdays ;)

Was it cheaper if you didn't keep the glass? that stack of yours (impressive for under 2 hours, dude) is decidedly un-glassy.

That sub is creepy, looks like it felled the poor bastid in the outfield.

I hate to ask the obvious, but will your summer ever arrive? Connecticut is one funky chicken.

Never been to a baseball game. Don't think the kids could stay still for an inning let alone a whole game. Still, beer might make it easier for dad.

Jacquie, you got the glass when you walked in (first 500 adults - ha!). We just chose to drink out of plastic, so for as to not knock down and break our precious cargo.

Nice detail-noticing on the stack -- I love to stack 'em up as I drink 'em, but it *is* a dead giveaway.

Hsin, we should just get the Mets to relo here; they're practically a farm team now anyway!

Captain, never? Really? There's tons of stuff for kids to do during minor league games. In addition to high-fiving the Giant Chicken. They have activities and games every inning. You should give it a try next time you're in the USofA.

Yes, Dot, I think that's a great idea. We can get some hunka-hunka burnin' love to rent a room from us and do all our, um, tasks for us. Perfect.

And Jacquie? No. No it will not. Ever arrive. We will have no summer this year. I have accepted that, and have moved on.

Seeing as the real reason I go to the ballpark is to drink beers and eat peanuts and take in the ballpark ambiance, as it were, I think you've got it way better than we do here in San Diego. Beers are now $10 plus, ouch! That's three stacked cups, plus a third, to my one. It's just not fair, Ellie...

It is sunny here today though :-)

The Asheville NC Tourists minor league baseball team has $3 beers on Thirsty Thursdays too. Tons and tons of 20- and 30-somethings go to the park and just hang out in the concourse, near the beer vendors, socializing, and never go into the game! It's such a funny scene.

I might add that when you take in a young hunk of a ball player, you have to feed them and get them to practice (kinda like an over-sized teenager)
After seeing your posts that involve food, beverage, and you r beautiful kitchen, I'm sure the boys would be fighting to stay with you!
Let me know if you take the plunge :)

I LOVE going to PawSox games with our son. He used to think they were the Red Sox, so it was a cheap way to impress him. He's onto us now, but it's still fun.

"It has come to mah attention..." (as our high school principal Lew Dunlap used to say over the PA System) ...that actually the good guys won the game. I neither remembered that salient fact, nor did I notice it on the photo of the scoreboard that *I* posted.

Please remind me to never go into sportswriting.

Ellie, it just occurred to me...you should come to NYC while I'm here on vacation. We could actually meet! Another blogger friend of mine did just that...came in all the way from Syracuse and we met up last night and will again tonight. Join us! You have until Friday morning...that's when we leave. My other blogger friend has now met 3 blogger friends...she says she can strike them from her "blogger life list" now. I know this is completely off the subject, but I'm just now reading your post and it just occurred to me. See you before Friday?