My boyfriend and I attended the World Music Festival on Catalina Island this past weekend. It was the first annual, so we didn’t expect it to be big, but hey, we didn’t expect what we got, either.

You get a good idea of how big the event was by the size of its pumpkin patch. 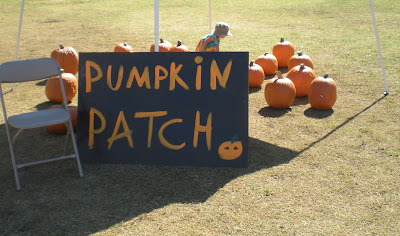 Who needs crowds of drunk college kids ribbing you to get to the stage? I don’t.

Instead we had a group of lovely and talented adult hula hoopers.

I was almost feeling slighted by Jacquie’s new best friend. You know, that woman in the red dress with her triceps tatts and high heels driving the scooter (motor bike, pfft) that she went on and on about on Friday?

But now I have a new mental best friend too. 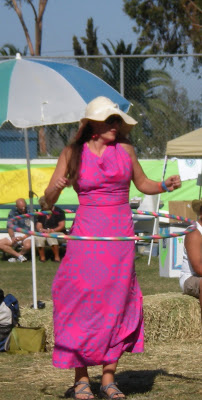 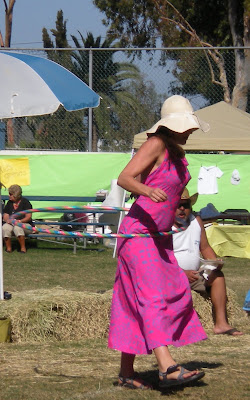 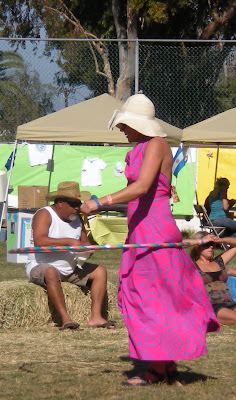 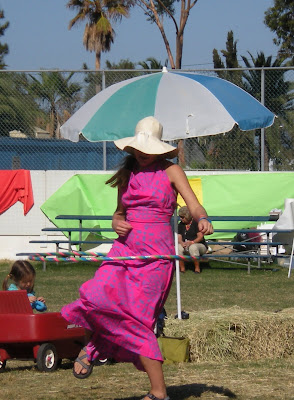 These photos so do not capture her hula-hooping-while-dancing skills and viewing them quickly is not nearly as effective as Ellie's blanket shaking sequence in her Oregon post, so if you’ve got an extra minute and want to see my new best friend do her thing you can view her on video. (Scroll to 15:37.) I promise it's worth it.

She was hooping to Johnny Cruzial and the Renouz, the featured reggae band. 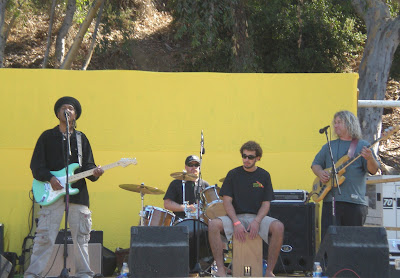 Later on in the day, my boyfriend and I gave the hula hoops a try during the somewhat disappointing Italian-Russian-Balkan gypsy jazz band. (Thankfully there are no photos of these attempts, and yes, he is a better hula hooper than me.)

Later still, my boyfriend proclaimed his love for me on video during Gtonic, the Afro-Latin funk band whose lead singer looks like Denzel Washington.

Isn't it cute how the stage's back drop is a drape over the goal posts?

Still later, we took a few minutes to put down our Angel City Brewing microbrews and stumble down the hill to get some needed dinner.
We missed the Irish band, but ended up with steaks and a view. 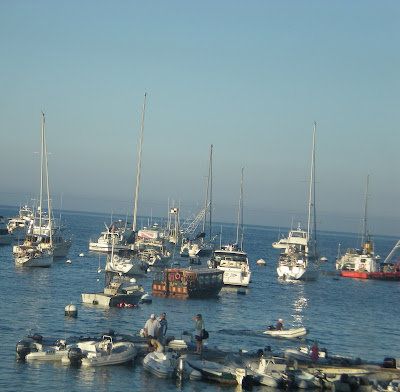 After scarfing down everything in front of us dining, we headed back up the hill. We just couldn't get enough of the festival. It turns out the last band, Delta Nove -- a Brazilian rock reggae band we thought we'd like -- was completely unrewarding. But being given free beer because we had been such good customers all day was rewarding.
All in all? A terrific time. I plan to go back if there's a Second Annual Catalina World Music Fesitval. I'll probably know half of the attendees, plus how can any music festival on the beautiful island of Catalina not be worth it?
Especially when the trip over starts on this 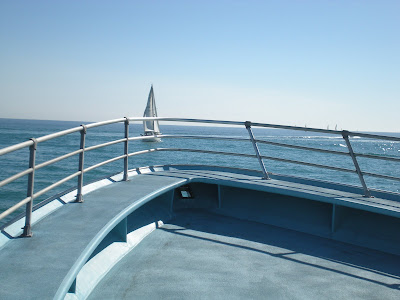 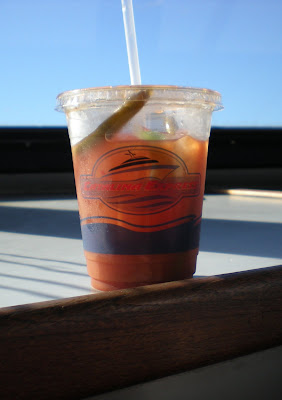 And ends with the boat ride back that includes beers and snacks?

Okay, so we're easily amused, and can find fun in most places. I bet most of you can too.

What a happy post! And what an awesome hula-slash-dancer. You and Jacquie have the best imaginary friends.

I love that an Italian-Russian-Balkan gypsy jazz band exists -- and that video is great. I'm jamming to reggae right now.

Great, all that cool stuff and all I want to do now is make a pretzel chain.

Awww, how cute that you're jealous of my new best friend! Your new mental friend - keyword mental - is quite talented, and also has a cool dress - AND a cool hat! I thought you'd go for the chick with the wings, though.

I think that chick was on an episode of LA Ink.

Damnit - how did you get a picture of me and post it on the internet?