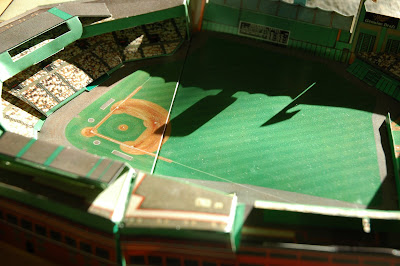 The sun shone brightly on the ballfield . . . 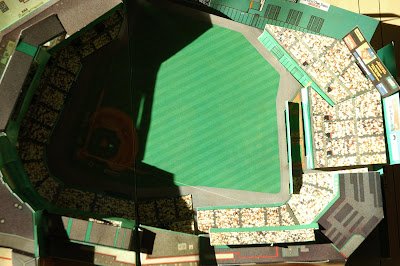 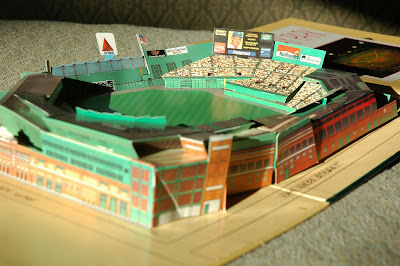 Oh, it’s just Mistah’s silly Fenway Park pop-up book, which he opened up just before Game 5 of the ALCS, hoping to bring them luck . . .

Fat lot of good that did them.

And all that matters is the score.

That’s right. The Philadelphia Phillies – aka the Mets' National League East archenemy – against the Tampa Bay Rays – whom I can’t think about anymore without thinking about a funny comment a reader left on my previous baseball post, about the team dropping the “Devil” from their name: “just ‘Rays’ makes it sound like a team made up of 50-year-old orthodontists: Please welcome the Rays, everybody!”

Lisa S and Ted are Phillies fans, Chrissie and Beth’s mom are Rays fans. Lovely peeps, the lot of them. Both teams are playing well, it should be a good series, blah blah blah. But really? Deep down inside? Who cares, really?

No, the only thing that matters now is the score, because I’m in a pool.

No not this pool: Although that was a really fun day and a really fun pool (when Jacquie’s then-6 year old daughter, who was hanging onto my neck and screaming into my ear like a screech owl the whole time I was throwing her 8-year-old brother, famously yelled, “Uncle Bill, put down your booze and get in the pool!”)

And not this pool either: 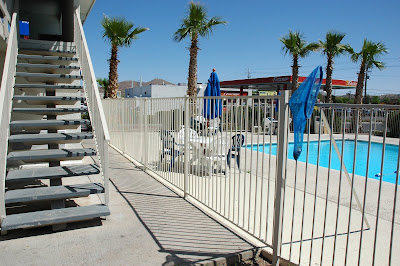 Although I have nothing but oddly nostalgic feelings when I think about our 8 nights and 9 days at Motel 6 in Nogales this past spring. 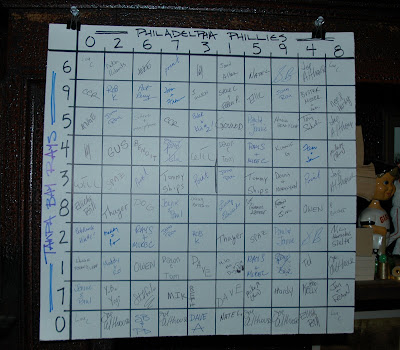 This is a great pool, because it is completely random. Here’s how it works:

First, sell all the squares on a blank grid, for $5 a piece.

Next, randomly select the numbers zero through 9, using a deck of cards. Well, ten cards from the deck, actually.

Each team’s score from every game gets added up, and the last digit of that final number is the winning number.

For example, say this pool had been in place for the Rays/Red Sox series. The scores were:

So in this pool, we’re looking for: 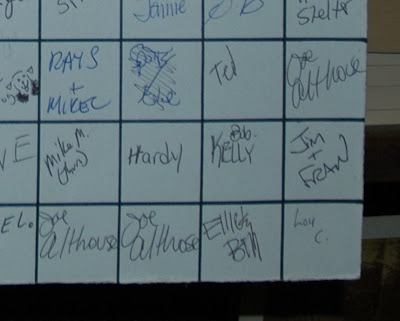 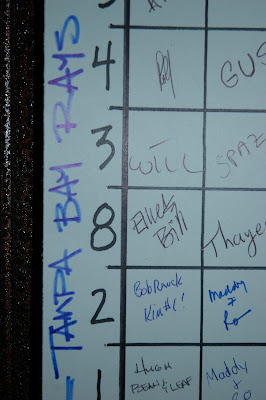 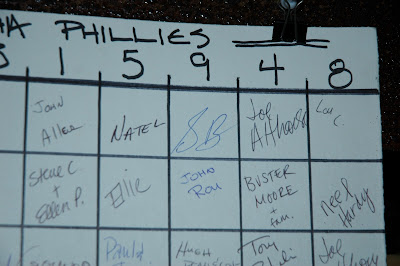 Or, especially and most hopefully, Phillies 5, Rays 9. Because this square is mine, all mine. I got this square as a tip from my friend Johnny Pink Slips. This square has winner written all over it.

It’s a tough pool to win. I’ve never won, but I did choose the box for the eventual winner one year, and got $10 for my efforts. I know! I should have gotten at least 10%.

I’m feeling lucky this year. I think I’m going to win.
.
But if I don't win?
.
Beth? Did you say something about football season?
at 4:10 AM

Mets? Are they a baseball team? I thought they went away after the 1969 season. Hmm...I'll have to look this up.

Good luck with your pool! I never win those things (we do one for the Super Bowl). I always get the worst number combinations, like the score has to be 8 to 4 or something (we can't pick our squares; they're drawn from a hat).

Thanks, p-and-d. And thanks for the great Rays quote.

My husbands best friend is a Phillies fan so I guess I have to go with them if I have to pick sides. I am still put out about the Cubs.

Whew! For a second there I though you were a super giant.

Huh, is baseball is still going on?

Oh yes, I do seem to remember my mom saying something about going to the game tomorrow....

And I do have to admit that going to a World Series game, no matter who the teams are, is a whole hell of a lotta fun (it's not the Superbowl, but still.)

That is one chock-full post, sister. Love those pool memories, and check out the face on my boy. You know how to show a guy a good time, Aunt Ellie. I still don't give a poop about the World Series, but I wish you endless good luck in your wagering.

YES, it is still baseball season, my co-bloggers.

You boy and I have it down, Jacquie. We've got our 1-2-3 Jump! underwater routine perfected in at least 2 states and 3 pools. I -- and he, alas -- only wish I could throw him higher.

I'm really sad the Sox lost - but...from hear on in it's GO DEVIL RAYS! (And they're definitely not a bunch of orthodontists.)

P.S. Bill's pop up Fenway did work - just not long enough to finish the series. (I know someone has to have a joke here.)

Good luck! We always used to do one of these at my office (a million years ago) and I never won. Sob. But I have a good feeling about your chances. And I love the photos!

Good luck with your pool, and when you have a football pool write me in and I'll send you the five bucks.

On a side note, I thought the first picture was real and couldn't figure out how you took it. Who's not real smart today.