None of our baseball teams made the playoffs. Sitting in front on their tvs on either coast, the San Diego Padres and the New York Mets players can only cry in their coffee and watch their colleagues play on.

This weekend’s 3-way question: Who are you rooting for in the post-season? And in you don’t give a rat’s ass, relate your best baseball memory from this season.

California Angels: blech
Tampa Bay Rays: yuck
Boston Red Sox: my husband, my mom, loads of my friends, and most of the American League fans here in southeastern Connecticut are Red Sox fans – I’d say rabid Red Sox fans, but that’s redundant. I just can’t do it. Billy even roots for the Mets with me, but I do not give him the same courtesy. I am no fan of the Red Sox.

Philadelphia Phillies: devil’s spawn
L.A. Dodgers: hate them, ever Orel Hershiser sold his soul to the devil against the Mets in 1988
Milwaukee Brewers: I actually like the Brewers, and like the town, but they beat out the Mets on the last day of the regular-season by winning their game, while the Mets lost theirs.

So. Even though they’re down 2-0 in their series, and are getting killed by the Dodgers, I guess I’m cheering for those loveable ol’ losers, the Chicago Cubs.

Chicago vs. Chicago. I like the sound of that.

But I really wish we were instead watching a post-season game at Shea:
. 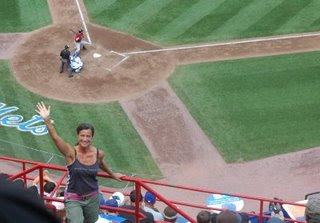 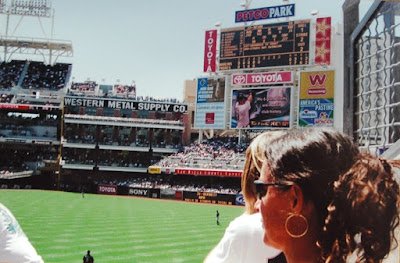 Beth:
I don't care in the least who goes on to win the World Series this year. So un-American, I realize. (I'll just eat extra apple pie to make up.) I know my mom is rooting hard for the Rays, and well, they did used to suck, so if I had to pick, that's who I'd go with.
I only made it out to the ball park one time this year. It was my first time sitting in the bleachers. (Every time I go to Petco I have worse and worse seats. I started out in the City of San Diego box the first day Petco opened, then got bumped down to the Alladin Bail Bonds box [yeah, don't ask], then on down to third base line seats in the 9th or 10th row, to outfield seats, on down to the lowest you can purchase -- bleacher seats!) I have to say though, the bleachers are the way to go with kids. You're not going to really watch the game with kids anyway, they can purchase hot dogs for $1 right around the corner, and there's the sandbox that keeps them entertained for at least 15 minutes.
Next year, maybe next year me and the Pads will be more engaged. Or maybe not. Go Chargers!!
.
Jacquie:
.
So, I had this nice long post about 3 good times at Petco, including several photos, which I opted to write in edit mode from Ellie's beginning to save time, and because I was linking to several previous posts. But you know what? Beth was editing at the same exact time as me, and blogspot apparently likes her better because although it SAID that it was saving my words and images, it tragically was not. And now? It just doesn't seem worth writing again, it was not my magnum opus. Here's how it began, go ahead and add the next line if you want to play:

Jacquie: I could honestly give hardly half a poop about the post-season
this year. But I did have some good times at Petco this summer! There was the
time we dropped the kids off at movie night and wanted to go watch the game from a nearby bar, but soon realized that

Been a Dodger fan all my life! 15-Years-Old has been rooting for the Rays all season. I don't know why. But now we're hoping for/dreading a Dodgers/Rays series.

Go Blue Jays!! Are they still in anything?? They're the only team we have, sorry.

What a tease! "But soon realized that

...the bar was not quite so nearby?

...the bar was actually a tanning salon?

Baseball? Got no freaking idea.

And I hate apple pie.

Good thing I aint American or I would have to deport myself.

I hear Russia is nice this time of year.